Years late (as usual) I’ve become a huge fan of Veronica Mars – and am extremely bummed that it was canceled before I was ready for it to be over, thank you very much. Yes, it’s all about me. While Season 3 was nowhere near as strong as 1 or 2, it was still entertaining, started to hit its stride near the end, and had some good threads developing. And then…nada. 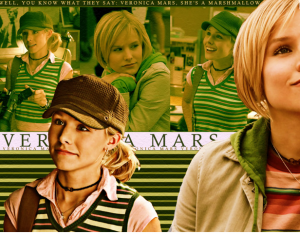 Anyway, I digress from the point that I haven’t even gotten to in the first place, and that is how much fun watching a show with little inside references (that you and a few other folks, mostly Austinites) get. And, yes, after hearing them, I wiki’d Rob Thomas and, sure enough, he’s from Austin.

How did I know? Oil Can Harry’s. The Boathouse. Amy’s Ice Cream (yes, it *is* the best). Liberty Lunch (we miss you, LL….even if you were too crowded every time I went.)

In other words, Neptune, California is really Austin, Texas. How cool is that?

Now if someone would just point me to the beach…..