Here’s a bit about the book: 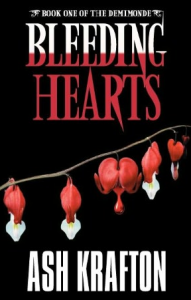 BLEEDING HEARTS: Book One of the Demimonde

Saving the world one damned person at a time—shy advice columnist-turned-oracle must find a way to save her dangerous demivampire lover from the fate that threatens each of his race: evolution and the destruction of his soul.

When advice columnist Sophie meets dark and alluring Marek, she learns life-changing secrets about them both—he’s a demivampire struggling to avoid evolution and she’s an empathic oracle destined to save him. Sophie possesses the rare ability to reduce the spiritual damage that causes a demivamp to Fall, making her the only thing that stands between a DV and evolution. However, as Marek’s dangerous past propels him toward his desperate fate, his enemies make darker plans for him: once vampire, powerful Marek would be second only to the Master himself. The vamps want to cause Marek’s Fall and they intend to use Sophie to do it….

You can learn more or buy the book at these sites:
Pink Narcissus Press
Amazon
B&N

Since I started along the path to publication a few years ago, I’ve had the pleasure of meeting a bunch of fantastic, talented authors who seemed to know where they were headed, what they wanted, and how they would go about getting it. It’s exciting and intimidating all at once. Sometimes, I wondered what ever inspired me to become a writer in the first place.

Certainly not an abundance of free time—I’m a full-time pharmacist and a mom of 2 to 4 kids (depending on whether or not you count in the dog and my husband.) I do my writing in bursts of inspiration during scraps of free time.

I’d always envied professional writers. I’m a reader, first and forever, who believed my favorite writers existed solely to feed my addiction to their books. Now, *they* were living the life, I always thought. Writing is their job, their big responsibility. No overbearing corporate big-wigs. I always imagined writers to be the happiest people on the planet.

I’ll never know what that life is like. I’m dedicated to my profession (and would be hunted down by an angry mob of senior citizens should I try to retire early.) The day job also lets me express myself in a way that writing doesn’t—I’m an educator, a nurturer, and a really bossy broad. I love telling people what to do.

I suppose my inspiration to write is simple: it’s my haven. My safe place. My retreat from the stresses that crowd my day-job life.

I picked up the pen several years ago during a rather difficult family time, writing passages about a girl out of her element, doubting she has the strength to face the challenges in front of her. The writing reflected the various stages of my actual conflict and, as my optimism improved, so did my MC’s. I never thought of myself as a writer. For me, writing was merely cheap therapy.

Soon after, the idea for BLEEDING HEARTS: BOOK ONE OF THE DEMIMONDE came along. Once more, I figured it would be a benign outlet for stress…but the project wasn’t happy with remaining a therapeutic exercise: it wanted to be a story.
I figured, why not? The diversion was still my haven, my sanctuary. Learning how to write a story would keep me busy enough, right? I began to research and study and collect books about the craft of writing. I joined Pennwriters, a national writers group. I entered a slew of contests.

When the book made finals in several competitions, I realized I was in trouble. Bleeding Hearts wasn’t satisfied being a story: it wanted to be a novel and it wasn’t going to rest until it got published.

I’m not sure when exactly my therapeutic exercise made the leap from hobby to job but it surely did. Not only did I write, complete, edit, revise, compete, and submit my novel, but I also wrote other things—poetry, essays, and short stories. They were diversions from the diversion.

I still practice full-time day-job, writing to fill the spaces of time between career and family. However, my ‘therapy’ has a new direction, one guided by contracts and publications and deadlines. I now belong to other writing associations besides Pennwriters. What started as a private retreat is now a group party-type thing. It looks more and more like a job with each passing day.

But know what? It’s still my haven and I love to spend time doing it. And, despite all the upgrades, I couldn’t be happier. That’s all the inspiration I need to keep writing.

You can learn more about Ash here, and be sure to enter the cool contest that Ash is sponsoring at her site

Thanks so much, Ash, for joining us!

So, folks, how about you? Is writing your therapy? Or maybe it’s reading? Me, it’s a little of both!

Hi, Ash. I enjoyed reading the post; it was a great read.

I’m not a writer but am certainly a reader. I find reading a great therapy. It’s a chance for me to escape reality for a while. I really like to read before going to bed at night; it’s better than watching TV!

The trouble with reading before bed, sometimes, is finding a spot in the book to put it down so you can go to sleep! Too often I find myself saying ‘just ONE more chapter!’

Thanks for stooping by and sharing your thoughts…

I mean *stopping* by 😉 Darn these smart phones and dumb thumbs!