Shout out for the weekend! - J. Kenner Skip to content

Home » Blog » Julie's World » Shout out for the weekend! 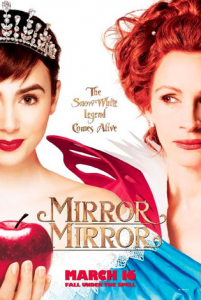 It’s Friday, I’m almost caught up with catching up, the girls have been rocking at their school work, and so we’re starting the weekend early!

So what’s on today’s agenda? First up, we’re going to do some tweaking to the script for a super-short, ultra low-budget movie (as in, if we break $50 I’ll be annoyed). It’s a project the girls are working on and we’re going to shoot it on the iPhone and cast neighborhood kids. World premiere coming this summer!

But it’s the next event on today’s agenda that the kids are really looking forward to, because we’re going to play hooky and go see Mirror, Mirror! I’m hoping there aren’t any scary scenes as Isabella’s still not quite down with the scary stuff (unlike her older sister who’s more than happy to whack zombies with her dad on the Wii). I’ll do a movie review this weekend; hopefully it’s a fun flick.

As for the rest of the weekend, I’ve got a speaking gig on Saturday, but other than that I’m going to revel in not having specific plans. Gonna do some cleaning, some gardening (if you saw my How Does Your Garden Grow post, you know that the yard needs it…though it’s coming along. At least it was until all this rain!), some writing, some playing with the kids.

And I’m also looking forward to seeing my buddy Stephen who’d coming into town. It’s been a couple of years, so I can’t wait to see him!

And, because it’s Friday and everyone needs a Friday funny, here’s a couple of movie trailer remixes that amuse me:

Harry Potter and the Brokeback Goblet

and my absolute favorite re-cut ever. The Shining redone as a heartwarming flick:

That’s me. What’s on your weekend agenda?

I can’t wait to see Mirror, Mirror! The trailers remind me of the 3 Musketeers movie that came out earlier this year–spit in the face of history, do some swashbuckling, and have a good time 🙂

It wasn’t quite as swashbuckley as I would have liked, but all in all it was fun — essentially it was what I expected. I still need to do the write-up I promised. Oops!