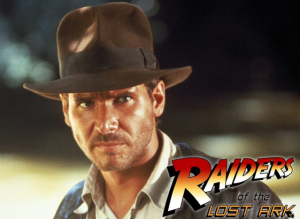 As in life, first impressions are everything in writing fiction, and writers can learn a lot from the classic, stellar film, Raiders of the Lost Ark. That movie is, frankly, a wellspring of examples of great story-telling. Right now, I’m focusing on only one.

Who is Indiana Jones? Well, he’s the hero of the movie. He’s an archeology professor. And he’s an archeologist. He spends much of his time in a classroom, as we learn about fifteen minutes into the movie. But what would have happened if the movie had opened with Professor Jones instead of with Indiana the action hero? Would the audience (reader) have believed that a guy that has girls writing messages to him on their eyelids, who stumbles out the door with papers spilling out of his arms, could manage all the swashbuckling coolness that Indie throws at us? No, they could not (just as Darth Vadar working at an animal shelter in scene one would not set the stage for the Darth that wreaks havoc on the ship the Princess is traveling on in Star Wars).

First impressions. Make ’em count. Make ’em define your character in ways that are key to the character’s development and story arc.

In Raiders, for example, not only is our first impression one of a swashbuckling adventurer, it also sets the stage for:

a) the series of failures (ever noticed that Indie pretty much loses through the entire movie, truly winning only at the end, and even then he doesn’t get what he thought he wanted all along?)

b) the encounter with the snakes in the Well of Souls, a huge dramatic and character moment

c) the relationship with the bad guy

In other words, that first impression of Indie is packed full of punch.

If you’re a writer, does the intro of your main character set him/her up well? If you’re a reader, can you think of other examples from books or movies of stellar character set-up?

Ah! What a great example of making the opening scene do its work. Clear, concise…and Indy! Love it!

Super advice for ANY genre of writing.
But to choose Indianna for the type, perfect!

In the absence of inspiration, do you still sit down to write anyway?
Or do you procrastinate and wait for motivation?

A combination 🙂
I’ve never been without inspiration for a new story (thank goodness) but I often get stuck on whatever story I’m working on. When that happens, I usually “procrastinate effectively” — as in, I clean the house, fold laundry, do yard work. Usually, that gets the brain cells flowing. If that fails, I call in the big guns — my friends–and brainstorm the problem. Even if we don’t come up with the perfect solution, we’ll come up with something. And once that something’s on paper, it can be edited!

Really enjoyed this post. We just watched Raiders a week or so again after a long hiatus and I had some of the same thoughts. That has to be the best opening sequence in a movie ever!

It is! It really is! I use Raiders as an example every time I teach a writing class. No matter what the focus of the class might be, there’s usually an example from that movie 🙂

[…] Indiana Jones and the First Rule of Writing Fiction. Share this:TwitterFacebookLike this:LikeBe the first to like this. This entry was posted in Uncategorized. […]