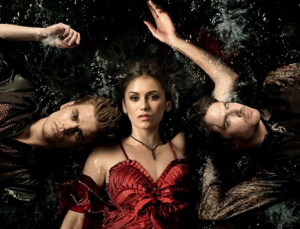 If you don’t like spoilers and you haven’t seen The Vampire Diaries Season 3 finale called The Departed, then you should leave right now (wait, no, don’t leave. explore the rest of the site! Yeah, that’s it…explore….. I compel you to explore….)

Anyhoo, there’s no way to talk about the finale and not give away the Big Thing That Finally Happened. And that I knew would happen (and presumably so did a lot of other folks) from the moment Alaric turned bad.

How did I know? Because of foreshadowing, folks: “You’re life is tied to mine, Bad Alaric. I die, you die,” says Elena, albeit not in those words. To me, that’s a big, flashing neon sign that, hello, to defeat the Big, Bad Vampire Killing machine, Elena is going to have to die.

But…but…she’s the heroine of the show! She can’t die!

Ah, but it’s a vampire show. Sure she can. It makes sense that she will die (high drama, folks!). And in my opinion, it’s about time!

And then, in that last shot … the eyes open. She’s a vamp! (Cue the balloons! Next season something new will happen! Yay!)

Do I sound like I was getting burnt out on the show? I wasn’t…it’s still a hoot and a half … but it was bumping into that epic problem of series shows (and books for that matter). Viewers like the schtick. We enjoy the world built by the shows creators. And so the creators are hesitant to move too far, too fast. So instead of evolution, we get a couple of seasons of the same thing with different characters. Epic Bad Guy. How to defeat him? Done! But we don’t get to relax because now there’s a new epic bad guy (seriously, there are a lot of epic bad guys out there, and they all congregate in Mystic Falls).

That’s all fine and fun (and I even came to enjoy Klaus, who really got on my nerves at first), but after a while the character stuff (I’m looking at you, Elena) got incredibly one-note. She’s the main character, the core around which the show spins. Either she has the chance to grow and develop, or the show withers and dies.

Kudos to the folks behind the scene for making the jump to vampire-ism.

I’m actually impressed that they did it this season. I saw it coming a mile away, but it didn’t have to happen this year. Alaric being bad could have been fodder for a full season, or at least half of one. So I’m glad they went ahead and did it, and next season will be fun watching Elena make the transition and then deal with her new vamp-ness.

Would Stefan really save Matt before Elena? I don’t think so…unless he figured out what she was doing.

In the past, if Dad had enough in him to point to Elena for Stefan to save, then couldn’t Stefan have at least tugged him out of the car? He ripped the door off anyway. Why not at least give dad a shove to the surface?

She picked Stefan over Damon (okay, that’s not really a minor nit, and it’s also not necessarily a done deal, but I’m team Damon, so bummer, man).

Favorite line:
“Do you need anything” (to run away together).
Caroline “No, just you. And maybe a curling iron.”

Most bittersweet moment:
Elena tells Damon that maybe it would be different and she’d have picked him if only they’d met first. Turns out they did meet first…but he compelled her to forget.

The only question now is: what do I watch over the summer? I’m thinking it’s time to check out the “new” Battlestar Galactica. I still haven’t seen it! How embarrassing is that?

Did you watch the finale? What did you think? Got suggestions for me for a summer show?

Yep, I watched the finale and, like you, I wasn’t really surprised. Hope it will and it should shake up things a bit next season. I liked Alaric, so I’ll be sad to see him go, but I read somewhere the actor’s already been cast in a new pilot.

The ‘new’ ROFL BSG is excellent. Can’t praise it enough (well, apart from the ending, which I did not like one bit).
One summer show I can recommend is “Suits”. Season 2 starts on June 14 (so you’ve got 2 weeks to watch all 12 episodes of season 1).

Cast in a new show makes sense. I was bummed for the actor bc being a bad guy for a season woulda been fun!

Thans for the tip re suits. Will check it out. I know, re BSG, right? Memories of my youth……

I need to give True Blood another shot. I LOVE the books, but The show never grabbed me. But maybe it’s time to try again….

You’ve haven’t watched BSG, yet?! *blink, blink*
😛
You’ve got some epic TV in your future.

On the Vampire Diaries season finale: I couldn’t agree more on the bittersweet moment. Despite the fact that I couldn’t picture Elena (even pre-vampires-in-Mystic-Falls-Elena) being so casual about meeting a complete stranger in the woods and having an intimate conversation with them. But, whatevah. It’s all good. 😉

YES!!!! I was thinking the same thing. Alone. In the dark. I’m sitting there hoping I raised my girls to be a bit more cautious!!!

I’m not a huge vampire fan or anything, but I notice this show can be streamed over Netflix and it sounds pretty good, so I might have to check it out. Thanks for bringing it to my attention 🙂

Let me know why you think. My husband and I both enjoy it!

I LOVE LOVE LOVE this show. I run on the treadmill to it. I go faster if I think I’m running TO Damon or AWAY from bad guys. I also agree Stefan wouldn’t have saved Matt. BUT I love evil Tyler.

Oh, yes! Evil Tyler looks like he’s going to be tons of fun!!!

If you like Vampire Diaries, you should check out Teen Wolf (season 1 recap is on tonight on MTV). Season 2 starts soon.
But the best summer show is Falling Skies on TNT! Season 2 starting next month for that too.

hey julie, have you read the vampire diaries books? also teen wolf is great. but i must say i am loyal to vampires. stefan fan here!!!

As for the books, I haven’t!!! My husband bought the first one, and it’s in the Taller Than The Empire State Building TBR pile. So soon. Soon…soon.

Someone said they’re doing a spin-off with Klaus! Would be cool!