Tattoos and flaws and anorexia, oh my! - J. Kenner Skip to content 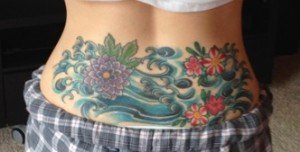 I’m thinking about flaws today. It’s one of the things that I’m having fun with as I go back and look at some of my backlist books. I’m not revising heavily, but it’s fun to be able to fix a few of the flaws that maybe made it through the copyediting/galley process.

But what about other flaws? Physical flaws that you think you just have to live with. Sometimes you do just need to learn to live with them. My chin is crooked, for example (thanks, Grandma). I suppose I could have a plastic surgeon break it and reset it … but no.

My daughter has a scar on her lip and a “smooshed” nose on one side. Despite the fact that she hasn’t really been exposed to much teasing about that (the benefits of homeschooling), she wants it fixed. So she’s having surgery to open up her nose and to once again tweak the scar on her lip. It was her decision, since this surgery is cosmetic, but although she’s eight (and remembers the first lip revision a few years ago), it’s important to her. (And we’re agreeing to have it done this year since she has another surgery scheduled in the fall to do a bone graft.) I don’t think the scar on her lip is a flaw–I think it’s part of her character and I think she’s beautiful. But she’s self-conscious, and considering she’s already self-conscious about her speech (she was born with a cleft palate that wasn’t repaired until she was three and a half) I want to help her address her perceived flaws and raise her self-esteem in any way that I can.

When I was younger, I was overweight, and I was teased for it. (Remember cordoroy pants? Let’s just say that kids like me with thighs like mine shouldn’t wear them and not expect to be teased). It got to be a thing. My dad offered me money for every pound I lost (his heart was in the right place, and fortunately I don’t need therapy). Eventually, the thing turned into anorexia. My life was ruled by food. Or, rather, by the not eating of food and the planning of what little food I would have. Did you know that a frozen bag of green beans boiled and drenched in salsa makes a filling no cal meal?

I got down to about 87 pounds at the end of my junior year in high school. I looked emaciated. (I’m 5 feet 8 inches tall). I was weak. But I’m a Type A personality, and I was determined. And so on and on it went.

College and Karen Carpenter saved my life. Karen Carpenter because her death scared me to death. College, because I was going to school full time and working on a movie at night. I had to have nutrition or else I would have collapsed. And I was the girl in charge of picking up the bread that was donated to the shoot. (The movie was Future Kill, by the way. I blogged about that here!). I would allow myself a bagel. But here’s the thing about anorexia, at least for me. Once you break that barrier you’ve built, it all comes tumbling down.

With me, it tumbled by about 30 pounds in four weeks. I got back up to 120, still thin for me, but infinitely healthier. But I also got stretch marks. Horrible, huge red stretch marks all along my lower back. Painful, nasty and gross.

But I knew that I did it to myself, and in a way they were a badge. I’d been anorexic, but I’d come out the other side. I can’t say that my relationship with food was healthy (it still is something I have to work on), but I wasn’t starving myself anymore.

I got pregnant many years later, and didn’t get one stretch mark on my belly. Yay! But what did it matter, I had them on my back?

When jeans went up to your waist, this was not a big deal. Fashion now is not for the stretch-mark challenged. And I was buying the highest rise jeans I could.

But recently, I got fed up. I started researching ways to remove stretch marks (nothing sounded like it would work). I talked to plastic surgeons and was told it wouldn’t work well.

Then I had an epiphany. I’ve never really wanted a tattoo, though I’ve always thought they looked cool. But what if instead of hiding the stretch marks under my clothes I camouflaged them under art? I researched, and sure enough some folks have done that. I found a great tattoo parlor in Austin and went in to talk to them. The artist explained that the color on the marks might not hold as well, so my idea of an ocean scene was great–we’d use the marks as part of the color distribution.

It took a long time! Two visits of about two hours each, and I don’t recommend your first tattoo be one as big as mine. But it works! You don’t notice the marks anymore…just the art!

And the really cool thing? I was shopping for bathing suits with the kids the other day, and I put back a two piece, thinking I couldn’t wear it. Then I remembered–I have the tat now, for exactly that reason! So I got the thing. I may not have the thighs for a bathing suit, but dang it, I’m happy with my back!

**If you have anorexia, bulimia or another eating disorder, please get help. Don’t keep it hidden. If you suspect a friend or family member has an eating disorder, talk to them about it. And urge them to get help.

So how about you? Got any flaws your working on? Have you found a way to flaunt them rather than hide them?

Yeah, i’ve got “beautiful” curly hair i was mercilessly teased for throughout school, when i wear it down now, i feel so self conscious. but my daughter really has such beautiful curly hair- and i don’t want her to feel bad about hers- so i wear it down and hold down any feelings so she will be proud when she steps out of the house.

It really is in the eye of the beholder! I love the look of super-curly hair. Maybe because mine is so obstinately straight!

DIdn’t now about the anorexia–so glad you werea ble to overcome that. I love the tat–it is glorious. Hope to see it someday. My flaws are too numerous to mention but I attempt to ignore them.

LOL, Jane. And thank you!

Great tat! I have one on my back as well. Tatts are for you and no one else!

I agree! Except, of course, for showing them off. I love wearable art!

What a great solution. I have marks on my upper thighs that I hate. I would never have thought of turning them into art.

Very pretty tat, Julie. Love the flow to it and the flowers are a great touch.

Great post. Thanks for sharing your story and your beautiful tattoo. Best wished for your daughter’s procedure.

thanks so much, Celia!

Love the tattoo, Julie! Such a great idea to do that for yourself. Your story of how you overcame anorexia is inspiring. Best wishes to you and your daughter on her upcoming surgery.

Is that a picture of your actual tattoo?? It’s beautiful!! What a wonderful idea!

As far as flaws ~ my nose comes to mind. My sister called my nose a name that I won’t even repeat, it’s so vile ~ but it has stuck with me my whole life. I have considered plastic surgery for it, but now that I have kids and they have my nose or a version of my nose ~ what message would I be sending abt their own noses?

I decided that I wouldn’t be sending a good one, so I’m sticking with this one and trying to accept it each time I look in the mirror ~ but have not found a way to flaunt it 😉

Yup…that’s it! A lot of real estate (aka, ouch!) for my first foray into body art, LOL!

I think what you say about your nose and your kids makes perfect sense. And if it’s any consolation, at least in pictures your nose looks great to me!

That is a truly beautiful post. It made me tear up. Thank you for sharing. I am struggling so so much right now with my weight after it being an “easy thing” for decades and it is SO hard for me to see myself in a good light. This was just what I needed to read.

Thank you so much for saying so…I think you just made my Sunday!