From Supreme Ruler of the Universe to Girl Next Door: How to Write Believable Characters Skip to content

Home » Blog » Story craft » From Supreme Ruler of the Universe to Girl Next Door: How to Write Believable Characters 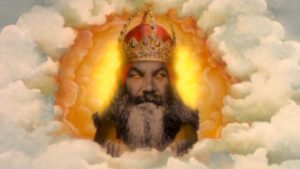 First things first: There is no right or wrong way to create a character. Where your book is concerned, you’re God.  So that’s my caveat. If you like what I have to say, great. Use it. If not, then just toss it. You’re the boss here. You’re in charge. (Feels nice, doesn’t it?)

All characters have to have a goal, and you as a writer have a goal too. That goal is to create memorable, larger than life characters that have a life of their own (and often, that life is even greater than their story!)

(If you’re not familiar with the concept of characters having goals, I highly recommend Deb Dixon’s excellent Goal, Motivation, Conflict. Unfortunately, it’s pretty expensive these days, but check your library or ask your writer friends if you’re looking for a copy. Robert McKee’s Story also does a great job dissecting the components that make up compelling characters. It’s a much denser read, however, so be prepared to really sink your teeth in!)

In other words, your character needs to be real. But not so real (not so detailed) that complexity turns into a muddle.

Characters are a simulation, and we parse out the bits that the reader needs to see in the writing of the story.

Okay, but then what do I mean by real and larger than life? Your goal when you’re writing your novel or screenplay or short story is to find a character that fascinates you. If you’re not wowed by your character, your readers sure as hell won’t be either.

Need some examples? Have you heard of Lord Stark? Or Stephanie Plum? Or Indiana Jones? Or Harry Potter? I’m guessing you can tell me more about the character than you can about the details of the various plots they move through.

That’s not to say plot isn’t important — it is! But plot and character are inextricably intertwined (that’s the former lawyer in me shining through). That’s all well and good, but if you’re just starting out with a blank piece of paper, which comes first? Character or plot?

Frankly, it depends on you. As it should. You’re God here, remember? The god of your world.

Maybe you mind have a character burning a hole in your head (I was that way with Kate from the Demon Hunting Soccer Mom series).

Or you might have a story idea you love (that was the Shadow Keepers for me — started with the idea of a paranormal judicial system and and the first case my heroine would prosecute. The world came first … the characters later. 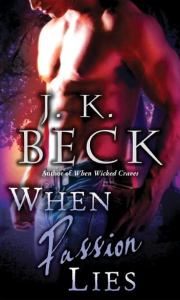 Either way, you’re going to meld character and story to get the end result. But what result? Well, the traits and characteristics of the folks peopling your stories. And remember, characters are tied to context.

What do I mean by that? Well, Romeo and Juliet wouldn’t be who they are without the feud. And the details and idiosyncrasies that make Sherlock Holmes so fascinating wouldn’t be nearly as effective if he was a baker.

Hitchcock had a very workable approach in my opinion: First you decide what the characters are going to do, and then you provide them with enough characteristics to make it seem plausible that they would do that.

So. What are our characters going to do?

Well, they need to care about something (maybe they don’t realize it right off the bat, but they need to care…and it can change. Think of Han Solo in Star Wars. Caring about saving his own neck and getting money changes to caring about his friends and the rebellion). 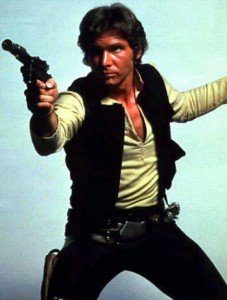 And, of course, caring ties into a goal. The goal drives the story and it’s what makes the reader care.

If your heroine is a runner, is the reader going to be more engaged if she’s just running in her neighborhood or if she’s training for the Olympic trials?

Somehow the character gets thrust into action — if they don’t act, there’s no story. In my demon hunting soccer mom series, for example, Kate is happily living as a suburban soccer mom. But she’s thrust back into action (and back into the role of professional demon hunter) when a demon crashes through her kitchen window.

In Die Hard, Bruce Willis is thrust into action when terrorists take over the building.

In Star Wars, Luke is thrust into action when the Empire kills his aunt and uncle.

Fair enough, but what if your character just isn’t that driven? Hello? Have you not been reading? You’re the god of the story. Make him care. Rip out his backstory, destroy the life he thought he knew, replace it with one that gives him something that drives him forward.

Remember, your job is to create interesting people doing interesting things in a believable way. The key to that is “create.” Your characters aren’t real. They don’t exist independent of the situation you’ve put them in.

So if the character doesn’t care and you have no action, then you need to change something. How? Look at the character’s motivation. The “why” of what they’re doing.

And that, Dear Reader and Dear Writer, is something we’ll talk about on Wednesday in Part 2.

(And speaking of books and characters … I’ve got a new book out this month, WHEN PASSION LIES, a Shadow Keepers novel with some pretty intense characters. I’ve also got the re-release of a light paranormal romance, THE CAT’S FANCY, priced for a limited time at only $2.99. The books themselves are wildly different, but they have one thing in common: the characters know exactly what they want, and are determined to get it.)

Now it’s your turn to tell me — who are some of your favorite characters (either heroes or villains) from either books or from movies. I’m always looking to watch and/or read about really fascincating folks!

The demon slaying socer mom is one of my favorite characters. So is Heathcliff (spelling?) thanks for a great blog/lesson. And, I memorized Deb Dixon’s GMC–do a chart whenever I’m stuck.

Aw, thanks Jane!!
LOL re Heathcliff. You’re right, of course, but the first Heathcliff I think of whenever I hear the name is the cartoon cat!

[…] post continues where Monday’s post (From Supreme Ruler of the Universe to Girl Next Door: How to Write Believable Characters) left […]