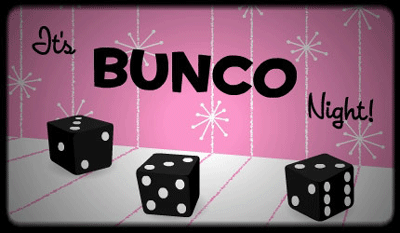 I’m so excited! To be honest, I didn’t even know what Bunco was until I saw it on an episode of Real Housewives of Orange County. Based on that episode, my understanding is that the game involves drinking, gossiping and name calling (this should get interesting!). Oh, and there are dice involved, too.

Seriously, some of the women in my neighborhood organized a Bunco group, and because that sounded too fun to pass up, I joined up…even though I really don’t know how to play. But we each bring $5. So I figure that’s either beer money, or it’s possible to win bucks, so, hey, sounds good to me.

Since I have a feeling that the Central Texas version of Bunco isn’t the same as the hair-pulling, bitch-slapping, name-calling OC variety, I decided to do a little research.

Here are some Fun Bunco Facts I pulled from Wikipedia:
There is a World Bunco Association
Bunco dates back to the 18th Century
It started in America in San Francisco in gambling parlors
It’s a social dice game (presumably Wikipedia means that the people are social, not the dice) and involves 100% luck and no skill (this is good)

Have you played Bunco? Did it melt down into a girl fight? Did you win enough to retire to Fiji? Come on…share!

My daughter’s school had a bunco night every year. We didn’t go when she was in first grade, but I heard enough stories that I decided we wouldn’t go at all, based on the rationale that I was good for one St C’s-related hangover a year, and that was the day after the school auction.
😉

LOLOL! I love the rationale … and the concept of elementary school Bunco hangovers!