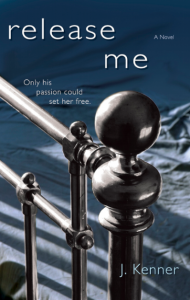 Evelyn passes by, arm in arm with a man with hair so white he reminds me of Colonel Sanders. She pats him on the arm, murmurs something, then disengages herself. The colonel marches on as Evelyn eases up next to me. “Having a nice time?”

“Hell, honey, you weren’t even putting any effort into that one.”

“I’m sorry. I’m just . . .” I trail off and tuck a loose strand of hair behind my ear. I’d curled it and pinned it up in a chignon. A few loose curls are supposed to hang free and frame my face. Right now, the damn thing is just annoying me.

She nods toward Damien, and I look that direction. He’s still talking with Audrey Hepburn, but I’m struck by the certainty that he had been watching me only moments earlier. I have nothing to base that on, though, and I’m frustrated, not knowing if the thought is wishful thinking or paranoia.

“He’s a hard man to figure out,” Evelyn says. “I’ve known him since he was a boy—his father signed me to represent him when some damn breakfast cereal wanted his face on their television spots. As if Damien Stark with a sugar high was the way we wanted to go. No, I landed the boy some damn good endorsements, helped make him a goddamned household name. But most days I don’t think I know him at all.”

“I told you, Texas. Inscrutable.” She draws out each syllable, then punctuates the word with a shake of her head. “‘Course I don’t fault him, not with the shit that was piled onto that poor kid. Who wouldn’t end up a little bit damaged?”

“You mean the fame? That must have been hard. He was so young.” Stark won the Junior Grand Slam at fifteen, and that had pushed him into the stratosphere. But the press had latched onto him long before that. With his good looks and working-class background, he been plucked out of the flurry of hopefuls as the tennis circuit’s golden boy.

“No, no,” Evelyn waves her hand as if dismissing the thought. “Damien knows how to handle the press. He’s damn good at protecting his secrets, always has been.” She eyes me, then laughs, as if to suggest she was only joking. But I don’t think so. “Oh, honey, listen to me ramble. No, Damien Stark is just one of those dark, quiet types. He’s like an iceberg, Texas. The deep parts are wellhidden and what you do see is hard and a little bit cold.”

She chuckles, amused at her own joke, then waves at someone who’s caught her attention. I glance toward Damien, looking for evidence of the wounded child that Evelyn has recalled, but all I see is unerring strength and self-confidence. Am I seeing a mask? Or am I really looking at the man?

“What I’m trying to say,” Evelyn continues, “is that you shouldn’t take it personally. The way he acted, I mean. I doubt he meant to be rude. He was probably just off in his head and didn’t even realize what he was doing.”

I, of course, have moved past the snub at our meeting, but Evelyn doesn’t realize that. My current issues with Damien Stark are wide and varied—ranging from the simple problem of a ride home to more complicated emotions that I’m not inclined to analyze.

“You were right about Rip and Lyle,” I say, because she keeps looking in Stark’s direction, and I want to head off any suggestion that we edge our way into that conversation. “My roommate is in awe that I’m in the same room with them.”

The two stars—both polished and shined within an inch of their lives—are perfectly polite and perfectly dull. I have nothing to say to them. I don’t even know what their show is about. Evelyn can’t seem to wrap her head around the possibility that anyone could either not care or not know about all things Hollywood. She seems to think I’m merely being coy and is about to leave me alone with these two.

Social Nikki would smile and make polite small talk. But Social Nikki is getting a bit frayed around the edges, and instead, I reach out, snagging a bit of Evelyn’s sleeve before she escapes too far. She looks back at me, her brows raised in question. I have nothing to say. Panic bubbles in me; Social Nikki has completely left the building.