Has The Walking Dead reached out and grabbed you, too? - J. Kenner Skip to content

Home » Blog » Uncategorized » Has The Walking Dead reached out and grabbed you, too?

Awesome post today for you guys about one of my favorite Twitter topics, The Walking Dead. Kim Griffin’s a total fangirl, as you can tell from her blog at TheFitnessMoms! So read on for some zombie goodness!

I’m thrilled to be posting on Julie’s blog today ~ thanks, Julie! When she mentioned The Walking Dead, I just about jumped out of my chair because the show is one of my current obsessions. 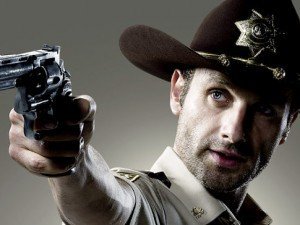 The Walking Dead starts off in it’s first season with a drop dead sexy sheriff (Rick) meandering through a slew of abandoned cars and what appeared to be a war zone. It’s obvious he’s looking for something when he happens upon a little girl walking in bunny slippers and carrying a teddy bear. He calls out to her a few times, “Little girl.” Finally, she turns around ~ revealing that she is a zombie.

From that short scene, I was hooked.

Fast forward a couple of seasons ~ we’re now in Season 3 ~ and have learned that there is a full blown zombie apocalypse. Technology is gone and nobody knows how many humans have survived.

One thing is true in the show ~ through all the rotting, flesh eating zombies and the running for your life scenes, the base for the entire story is the same base for any story and life in general ~ the people, their basic needs and their relationships. They still need food, water, medicine, shelter, connection and love. These needs drive the entire show. We see that in the midst of all this chaos, they find love, they make friends, and they find the evil that still exists in mankind.

One other thing we know ~ everyone is infected.

Infected. How could this be possible?

Well, if you’ve ever had the chicken pox, you know it’s possible because that’s only one example of a virus that sits inside you forever until it decides to rear it’s ugly head in the form of Shingles.

The talk of a zombie apocalypse has grown tremendously since the beginning of the show ~ so much so that people are not only preparing for it, they are expecting it. What makes a normal rational person believe such a crazy unbelievable thing?

Consider this ~ every couple of years, a new virus pops up, seemingly out of nowhere ~ affecting human bodies in some expected and unexpected ways. Bird flu, Ebola and Bubonic Plague, to name a few.

Where do these new viruses come from? We don’t know, exactly.

Some scientists theorize that they could be coming from newly explored (and destroyed) parts of rain forests and other undisturbed places in the universe.

The more we explore or destroy those areas, the bigger the chance that we stir up viruses which may lay dormant and harmless.

Who knows what they will do? 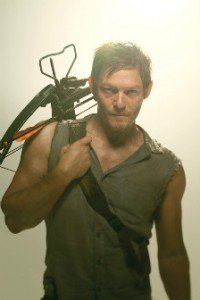 Maybe, just maybe, one of them will turn on a part of our brain, after death, that craves human flesh. It is possible.

…and if it happens, I want Rick and Daryl in my group.

Do you watch The Walking Dead? If you could pick 2 people from the show to be in your zombie fighting group, who would you choose? Do you think a zombie apocalypse is possible?

Thanks so much for guest blogging today, Kim!

You can learn more about Kim Griffin at her blog, or give her a shout-out on Twitter or check her pins on Pinterest!

And in bonus news, I’m running a holiday contest! For the rest of this month, you can use the Rafflecopter widget below to enter for a chance to win a $25 gift certificate! (if the widget is wonky, try refreshing the page)

[…] explain how in my guest post today at Julie Kenner’s blog.  Yeah, that’s right, I’m hanging out there […]

I would have Daryl and Dale (RIP Dale!) on my ZA team.

definitely RIP Dale … he annoyed me at times, but I loved how he provided the “I’m not in my 20s or 30s” perspective!

Dale was a strong moral compass, for sure..

That’s another great thing about the show, though, they will kill anybody off at any time. Nobody is safe. Keeps the watcher on their toes!

What a great write-up – I haven’t seen this show, but now I totally want to! I’m a bit of a zombie fan, come lately – and plan on seeing if I can watch this from the beginning – thanks for the write-up!

My husband and I just started watching it this year. The first 2 seasons are on Netflix!

My guess is that they’ll also have a marathon right before it comes back in February on AMC, so you could probably catch it from the beginning there too.

The series is a must-watch.

I haven’t watched the series but I’ve heard a lot of people like it! As far as a zombie apocalypse happening in real life, anything is possible!

It’s great ~ you should check it out 🙂

My son HATES zombies to the point where no one in the house is allowed to say “The Z word”. Funny enough, though, he allows “animated corpse”.

Sigh. I’m fairly certain he has my DNA so I don’t understand why he doesn’t dig zombies the way I do. 🙁 A house divided, and so forth.

Great post, Julie, and best wishes for RELEASE ME!

Thanks, Ash! My oldest loves zombies, the youngest hates them (except, apparently, in Minecraft. Hmmm)

I haven’t gotten hooked yet but will probably do so eventually. I have one son that is hooked and trys to give me plot lines every week but I refuse to listen so I’m not sure who I’d want on my side.

You should definitely watch the show. Start from the begging though because you will miss some awesome plot twists and story lines.

The mid-season finale was last night, so they are on a break until the beginning of February ~ perfect time to catch up!

This is the best show out there right now. If you are not watching it what are you waiting for? I would definitely have Daryl in my team and Rick even though I think he might be going crazy….What is up with Andrea? and when will they finally kill her off?

Yeah, Rick is losing his marbles a bit, but he’ll snap out of it …and Andrea, ugh, don’t get me started ~ she’s driving me bananas! Even after last night!

Definitely Daryl on my ZA team. I think Glen too (but mostly because I just think he’s such a cutie! lol)

He is ~ him and Maggie are so cute together!

Rick! My husband and I watch it on Mondays, or my kids will have nightmares!

I TiVo it and watch in the wee hours of the night for that exact reason!

I love the show. I have to pick Rick and Daryl.

Always looking for more to read