I’m so excited that Ruth 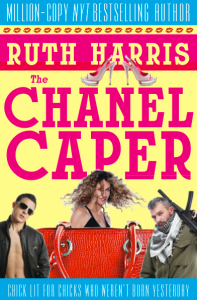 Harris is guest-blogging today!  Ruth is a New York Times and ebook bestselling author of romantic women’s fiction. With her husband, Michael, she writes thrillers. (How cool is that?)  Coming up soon is The Chanel Caper, a romantic comedy-mystery starring a baby boomer couple.

I particularly love Ruth’s description of The Chanel Caper -“chick lit for chicks who weren’t born yesterday.”  It addresses “the two most important questions of our time: 1) Is there sex after marriage? 2) Is sixty the new forty?” (I hope so, because that puts me back in my twenties!  Whoo-hoo!)

Ruth is blogging about collaboration.  I’ve done a couple of collabs now (novels and screenplays) and my experiences have been great, but not without challenges.  Ruth’s insight is awesome! 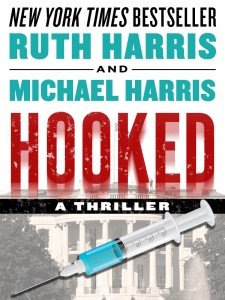 Love doesn’t always run a smooth path (no kidding!) and neither does collaboration. There are inevitably going to be times when you and your co-author—in my case my DH, Michael—don’t see a character, a scene, even a line of dialogue the same way.

Most of the time while we were writing our thriller, Hooked, Michael and I were in synch but there was one scene about which we had radically different opinions. I hated it so much I deleted it. Michael, appalled, retrieved it from the trash.

The scene occurs midway through the book and involves two characters. One is Gavin Jenkins, the brilliant and charismatic doctor who is at the center of the story. The other is Adriana Partos, a world-famous concert pianist who retired at the request of her lover, billionaire tycoon, Nicky Kiskalesi. Now, however, Nicky misses Adriana’s fame and celebrity and wants her to come out of retirement.

The problem is that a severe arthritic condition has made it impossible for Adriana to play. Nicky, who didn’t get rich by giving up, suggests she consult Gavin Jenkins, a miracle-working celebrity doctor who, it seems, can cure almost anything. Adriana, reluctant but also afraid of losing Nicky, agrees to meet with Gavin.

As the scene was originally written, Adriana dislikes Gavin for intuitive reasons: she finds him slick and cold although no specific reasons are given. The scene, based on her instinctive dislike, seemed weak and unconvincing to me: ergo, the delete button. Michael convinced me the scene was necessary and could be made to work.

The question was: how? I trust Michael’s opinions so we had several conversations about why I hated the scene and why he thought it essential. We finally got to an agreement point when we decided that “something” specific had to happen in the scene to validate Adriana’s dislike and distrust of Gavin, a dislike so intense that she slaps him and walks out of his consulting room.

Having no idea of what the “something” was, I went to the computer to rewrite the scene. I took out the language referring to her “intuitive” dislike of his “coldness” and “hidden” personality. When I got to the exact lines that describe Gavin taking her arm in an intimate, almost caressing way & giving her the shot for which he has become known, the words, coming straight from my unconscious to the keyboard, emerged on the screen: “You’ve never felt this good, have you?” he whispers as he presses down on the syringe and the fluid enters her vein.

That brief line of dialogue—completely unanticipated—was a result of our previous conversations about the characters and the scene and gave us the “something” we needed.

In response, Adriana slaps Gavin, he calls her a bitch and tries to give her a second (different) injection but, by then, she has left. The scene ends with her standing outside his office and remembering the bulge in his pants. Had she been seeing things? Imagining things? Or had he had an erection as he administered the shot?

Since we already know about Gavin’s sexual kinks from earlier scenes, we now had a compelling scene that advances the plot, creates conflict between Adriana and the gifted doctor whose help she will need and adds a new dimension to Gavin’s intriguing, mysterious character.

Sometimes disagreement is the friction that produces the pearl. You just have to get from there to here.

J.K. here again:  Thanks so much Ruth!  I’ve had the same experience collaborating — does it make me weird to say that I actually love that disagreement process?  Some of the best scenes come when you push yourself even further, and I think that collaborating often facilitates that.  You’re forced to look at scenes, characters, whatever from a different angle, and that often leads to a new and better perspective!

Readers, you can visit Ruth (and learn more about all of her books!) at her lively blog,  http://ruthharrisblog.blogspot.com/

So tell us, for you writers out there, have you ever tried to collaborate?  For that matter, even you non-writers have probably collaborated on projects (heck, even buying a house is a project between spouses that requires collaboration!  i.e., do you or do you not need that extra bathroom?  hint: the answer is always yes!).  How did it go?  Good experience?  Bad experience?

I love this post! You know, it occurs to me that I’ve only collab’d on writing. I suppose buying a new built-for-us house was a bit of a collab, but since we didn’t design it ourselves, it was pretty painless!

Thanks, Julie. Writing thrillers lets me indulge my wild side. With my husband’s approval, of course!