The Right To Love - J. Kenner Skip to content 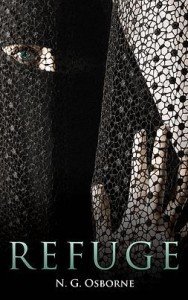 I’ve known N.G. (Nick) Osborne several years ago via my various adventures in Hollywood, and I am beyond thrilled that his first book, Refuge, is not only available, but garnering rave reviews!

Please welcome him to the blog today! (And don’t forget about my holiday contest! You’ll find the Rafflecopter entry form at the end of this post!)

Many of the novels I’ve been most drawn to in this life – Jane Eyre, Anna Karenina, Pride & Prejudice, Middlemarch – have had at their heart these incredibly strong and courageous women; women who’ve battled the popular perceptions of their time and have courageously loved despite the obstacles and scorn flung their way.
Now 150 years later, it may seem as if their struggle is antiquated. But what these women fought for in the nineteenth century is exactly what so many women in the Muslim women are struggling for now.
20 years ago I spent 12 months as an idealistic, young aid worker teaching in a school and an Afghan refugee camp on the outskirts of Peshawar, Pakistan. It was one of the most eye opening experiences of my life. I had never seen a woman in a burqa before and the only thing more shocking was the fact that most women wore them. In the main, the women there were third class citizens living in a patriarchal feudal system with few rights. Yet the rights they did have were strangely the ones that Western women had fought hardest to secure, namely the right to vote, the right to work (if only in the most menial of jobs) and the right to property (a central tenet of Islam).
The one right they didn’t have was the right to love.
Here are the facts. The United Nations estimates that 50% of all Afghan girls are forced into marriage before reaching the age of 15. Pakistan is the 3rd most dangerous country in the world for women with 1000 women and girls murdered every year in ‘honor killings’ and 150 suffering horrendous acid attacks. Most rapes go unreported and the reason is simple: unless a woman has four male witnesses it is almost certain that she will be charged with adultery or a ‘moral crime’. In Afghanistan 87% of women have experienced some form of ‘intimate violence’ – i.e. either a forced marriage or physical, sexual or psychological abuse. In many areas of Afghanistan the practice of ‘baad’ is common in which girls are given away to settle disputes between families.
This is why of all rights, the freedom to love is the one that should be most cherished and hardest fought for. For when a woman is not allowed to love whom she wants, she is in essence being told that her feelings are worthless and when you cannot act on your feelings you are no more than an emotional prisoner. Conversely if men can control whom a woman marries, they will never respect their opinions or look upon them as anything but their property.
On the other hand, if women are free to love (and free to suffer its consequences) they own the essence of who they are and all other freedoms will follow. Further men will come to look upon them as equals – for, if nothing else, in order to gain a wife they’ll have to earn their love and respect. In my opinion, this is the underlying message of all the great novels I mentioned earlier.
I am an optimist, as Frankin Roosevelt said in his fourth inaugural “the great fact to remember is that the trend of civilization itself is forever upward”. Yet if there is one area in which Western women could stand with their Muslim counterparts, I would argue that this is it.
The progress maybe glacially slow in many parts of the Muslim world, however I believe it will come and when it does, when all women are free to love whom they want and their men accept this fact, I believe the world, in turn, will be a more tolerant and peaceful place.

N.G. (Nick) Osborne is the author of Refuge, a love story set in Peshawar, Pakistan in 1991 between Charlie, an American aid worker, and Noor, an Afghan refugee. Called “the discovery of the year” by Henry Fitzherbert at the London Sunday Express, and based on his experience as an aid worker, it is a timeless and unforgettable story about the struggle for love and purpose in a cruel and cynical world.

I hope you check out Refuge — I was lucky to snag an early read, and it deserves the praise it’s been getting! You can learn more about the book and about Nick (and read his blog telling more of the story behind the book) at his website, www.ngosborne.com

I’d love to hear your thoughts on Nick’s post — and by sharing them, you can also enter the holiday contest!
﻿
a Rafflecopter giveaway

Sounds fabulous! Will put on my Goodreads TBR list!

Wow. I had never thought of the right to love as one of the fundamental rights, but your insight is spot on. Thank you so much for giving me a better perspective on this tough subject.

I know what you mean, Kelly. I’d never really thought of it that way before, either. Great post!

Ooooh! Look what I just found. Congrats Nick on this awesome review: http://www.express.co.uk/posts/view/364045/Book-Review-Refuge-by-N-G-Osborne-

This post made me sigh. We all have such a long way to go…
The book sounds very interesting! I’ll def check it out.

Sounds like an amazing book! Can’t wait to check it out!

I’m really moved by the topic of your novel and the idea of the fundamental right to love. I volunteered in Morocco (a very brief stint) in 2010 and was impressed with the rights women have gained in that traditional Muslim country. Unfortunately, the further out from the cities you traveled, the less likely it was that women were able to exercise those rights.

I’ve been to Morocco a couple of times Tami and the way women are treated there compared to Pakistan / Afghanistan is night and day. I was a volunteer too but in North West Frontier Province of Pakistan which makes the rest of Pakistan seem enlightened – it is nearly universal there for women to wear the burkha. The most horrendous thing is the tendency for young girls to be married off as 2nd sometimes 3rd wives to men who could be their grandfathers. In fact in the novel there is such a girl (only 12) who Noor and then Charlie try to save.

I can’t imagine being married off at the age of 12 to someone 4x my age. Night and day differences indeed. When I was in Morocco, the people running the volunteer group I was with (Cross-Cultural Solutions) were hopeful about the changes the government were promising to bring about. It sounds like Pakistan and Afghanistan have such a tremendously long way to go to even catch up to a country like Morocco. It’s heartbreaking…

This post–and the premise of your book–strikes a chord, since I’m a Pakistani married to a white American man. I’m from a upper-middle-class family in the south of Pakistan–in many ways, very different from an Afghan refugee in Peshawar–but there is a lot more resistance to a woman marrying a foreigner than when a man does. Growing up, I had classmates with American or German mothers, but I can think of no one who had a *father* of any of those nationalities.

Women in Pakistan are still very much defined by who their male relatives are. A woman’s passport, for example, will have her husband’s or father’s name in it.

I also want to point out that even men–especially young men–will not always get to choose their brides. Oftentimes, families will arrange everything and both young people are expected to go along. It can be difficult for men to withstand familial pressure, also.

(And as a side note–you’d mentioned acid attacks on women. Oftentimes, the perpetrators of domestic violence towards women are their *mothers-in-law*, usually with hot cooking oil involved. So it can be complicated, with women as victimizers and victims).

(Other side note: Growing up, I never expected to have an arranged marriage like my parents did. My generation, at least in my societal class, expected to have a say in the matter of our spouses. Probably not as much say as I ended up, but still…. *wry smile*).

Thanks so much for commenting, Rabia. It’s such a different perspective on family life than I’ve had.