When the story grabs you and won't let go: The Stellestrian - J. Kenner Skip to content 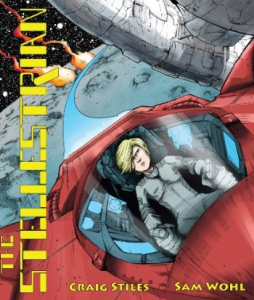 I’ve known Craig Stiles since we both auditioned for the same play oh-so-many years ago, and I have to say he is one multi-talented guy.  He’s built his own house (not like my husband and I did by picking out a model home plan, but really building the dang thing), he’s a working screenwriter, and now he has an awesome graphic novel to add to his accomplishments.

Having chatted with Craig about the story throughout its various permutations, I really want to get the word out about it, and especially alert folks that The Stellestrian is scheduled to be FREE for the Kindle on Sunday, December 16.  So be sure to snag your own copy!  And here’s Craig, to tell you more about how this story came to be!

You mean, we had a choice?

So I’m a writer.  Actually, I’m a screenwriter, which makes me about 3 times more nuts than your average writer.  I’ve actually sold stuff, so I guess that makes me official, but it sure hasn’t made me rich, or famous, or popular.  Though I think the cat does like that fact that I’m around the house all the time.

I also rather like writing stories with female protagonists.  Madness!!!  At least it’s considered madness in one major city on the west coast.  It’s a habit I’m trying to break.  As for choice, about the only choice any writer really has is which story they want to TRY to tell next, and sometimes you don’t even have that choice.

I’m a slogger.  I get an idea and I build it out one beat at a time.  I’m not one of those writers that sees the whole story and just has to tell it, and then hammers out a draft over the course of week trapped at home by heavy snowfall.  I think that’s a myth.  Nobody does that.  Perhaps it’s an honest lie. Women say they never remember the pain of childbirth; maybe some writers are the same about the pain of birthing a story.

Women say they never remember the pain of childbirth; maybe some writers are the same about the pain of birthing a story.

And then there’s the exception.  That time when the only choice you think you have is taken away.  That time that a story does come to you during the bliss of sleep and appears fully developed by the time you’ve poured that first cup of coffee.

Such was the case with a little story I called The Stellestrian.  Heck, even the title showed up out of the ether.  When that happens, YOU TELL THAT STORY.  You sit down and you hammer out every beat you can as fast as you can, and the coffee burns into the bottom of the pot.  Good.  It’s down on paper.  Thirty quickly scrawled pages in a legal pad.  I have it.  It’s not going to get away just a quickly as it came, provided I can read my handwriting after I hit the deadline I’m working on.

That was five years ago.  The legal pad sat for a few months, and then I called my agent and pitched it.  “It’s great,” she said.  “But we could never sell it.  It’s too big.  It’s one of those things that will need to exist in another form first.  Have you considered a graphic novel?  This would make a great graphic novel.”  Three more years and several more projects come and go.  I wrote the script between all the sure things that are never so sure.  And all that time, the little story about the girl who knew everything about her life was a lie, who knew it was a lie, but didn’t know the truth herself, kept eating at me.  It wanted to be told.  That girl wanted to become a Stellestrian.

And then one of the sure things actually hit.  Hollywood cut me a check.

A more prudent writer would have dug a hole so deep that Gollum couldn’t have sniffed the ring out of it, and stuck that check at the bottom.  He’d have filled the hole with concrete and lined the trail back to it with explosives.  I’m not that prudent.

I interviewed artists – dozens of artist.  And I learned that if there’s anyone more hungry that writers, it’s comic book artists.  That’s good news because they work cheap.  But oh, what a lot of work.  Budget?  Ha!  Don’t ask.

My brilliant artist, Sam Wohl, and I conversed, drew, reviewed, drew, and revised for 15 months.  We had three inkers, two colorists and a letterer all working to create 120 pages of pure graphic storytelling bliss, and it was as much fun as I’ve ever had in my life, but don’t ask.  It’s not about the money.  The story needed told.

And now it’s out.  My little big epic sci-fi story called The Stellestrian exists in full living color.  I have printed copies.  I can hold them in my hand.  I still enjoy it every time I read it, and I can’t say that every time I finish a project.

We’ve published digitally on Amazon, and we’re actually selling copies, and people like it.  Some like it a lot.  One girl’s read it three times.  Her boyfriend got curious and read it.  He told her it was one of the best sci-fi stories he’s ever read.  They live in Minneapolis.  She wants to be an astronomer.  I feel like a little part of their lives.

That’s what it’s about.

Craig Stiles is a screenwriter based out of Los Angeles, California.  You can snag your copy of The Stellestrian for free on Sunday, December 16.  And in the meantime, hang out with Craig at The Stellestrian’s Facebook page and find him on Twitter!

J.K. here: I’m so pleased that Craig was able to guest blog … and that I get the chance to remind everyone to snag a free copy of The Stellestrian!

So tell us, do you read graphic novels?  Young adult fiction?  Space stories?  We’d love to hear your thoughts … and don’t forget to enter the holiday contest, too.  Just use the Rafflecopter widget below.

I like all of the above! Thanks for sharing this one with us!