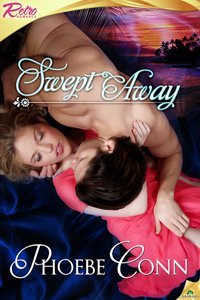 I’m thrilled to have Phoebe Conn as a guest blogger today! Read on! And be sure to check out her latest release, Swept Away!

It may take half a year or more to write a book, and I’d rather not spend my days writing about people I don’t want to know.

In some books, the plot comes first, other times the characters present themselves and demand a story. I can see them standing upon an empty stage with their hands on their hips waiting, not at all patiently, for their lines.

Keeping track of these clamoring characters presents a challenge. From my first book, I’ve used models from magazine ads or celebrity photos glued to 5×7 index cards. With each photo, I list their characteristics so if someone has blue eyes in chapter 3, they won’t have brown eyes in chapter 6. If they were orphaned, or detest ice cream, whatever detail will come into play is on their card.

Many writers rely on computer programs to track their story and characters, but I like having the cards readily available. It’s a great help when stories grow into a trilogy or series. The only problem is in finding photos of older characters or characters who aren’t as gorgeous as models. Newspaper photos provide a resource for real people.

I’ll also admit to scanning the people passing by when I’m away from home. If someone has a unique feature that would be perfect for a minor character, then I make a note of it. I never use friends, however. A stranger will never know he inspired a character with hair sprouting from his ears.

One night a friend and I were in a restaurant and couldn’t understand the waiter. He had a peculiar mumble that made his speech difficult to follow. It wasn’t annoying, but inspiring, and I used him for a space pirate who couldn’t be understood by his  crew with both hilarious and dangerous results.

SWEPT AWAY is my current Retro Release from Samhain Publishing. Eden Sinclair is a Virginia belle who’s sent to London to avoid the horrors of the Civil War. She meets the charming Earl of Clairbourne, who’s come to London to find a wife for his nephew, Raven Blade.

The minute Raven’s name occurred to me, he became vivid in my mind. He was tall and dark with a dangerous gleam in his deep brown eyes. UPS had a particularly great calendar that year with such handsome drivers I quickly found my Raven. He was one of my most intriguing heroes, and he wrote the book for me.

I do love my characters, especially when they insist upon telling their own story and all I have to do is keep out of their way. Whenever someone tells me about one of their favorite books, it’s the characters they remember, not the intricate plots. Isn’t that why we love romance?

Thanks so much for coming by, Phoebe!  You can meet Phoebe at her website!