I’m happy to have Kathryn Dahlstrom guest blogging today!  Kathryn is a talented author who writes across multiple formats.  We met through a screenwriting workshop of which we are both alumni — and which helped Kathryn with the book & screenplay she’s blogging about!  Check it out! 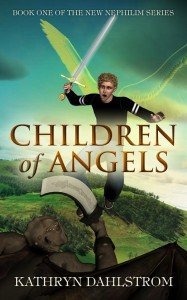 Julie, thanks a mil for inviting me to muse.  We’re members of Producer Hal Croasmun’s Screenwriting U Pro Series Alumni.  Hal deals in movie scripts, but his lessons apply to novels in everything but word count. For me, those lessons resulted in both—a screenplay and the novel Children of Angels!

In the course, the main focus is on story concept.  If the story idea is fresh and interesting for its genre, it could rise to a bestseller.  If the story idea is overused and dull, it could sink.  Since I write for tweens (10 to14-year-olds) and love fantasy, I churned out a dozen concepts—from cats that fight dragons to kids who change into eagles.  And nothing was strong enough to take through the full journey to screenplay or book.

When the lessons moved on to plotting and I still didn’t have my concept I brainstormed, balloon-charted, stewed, fought, and prayed….  I latched onto angels as fantasy beings who had not been overused.  (Really!  I respect the zeal vampire-romance fans have for their demigods, and the passion magic-lovers have for schools of wizardry, but I knew I’d have little chance as a Johnny-come-lately with either concept.)  But what could I do with angels?  I needed a human kid for my main character.  How could a kid have angel powers?

My prayers were answered with two words: the Nephilim!  As soon as the idea hit, I dropped to my knees because I was too excited to stand straight and anyhow, I had some thanking to do!  They’re described in a handful of mysterious verses in Genesis, Chapter 6, which says that for a short time before the Flood, angels made women their wives and their children were the Nephilim –  “…famous heroes and warriors.”  Cowabunga!  I had it: what if the genes of the Nephilim resurfaced in a teen of today and he developed angel powers?

I took the idea through the Pro Series course, finished it as a screenplay…and had Hal blast it into a debris field with rubble all over and hardly a character left standing.  He was right, too: the first “superhero-type” plot that I developed from the concept was a cliché.  He made me dig deep to find the story’s unique core, which is this: “A young teen, shocked to learn he’s part angel, must battle demonic forces out to destroy him for proving that heaven is real.”  When I recited that story line to Hal in a phone chat, there was a long-drawn pause while I waited on him, seeing stars because I was hyperventilating.

Then he said “I think this story will be a hit and I think you’re the one to write it.”

I hung up and went to my knees all over again.

So what if I had to start the story over!  This time, I was building it on a plot-from-idea foundation that was strong enough for Hollywood.  Children of Angels has already won over a family-fantasy producer, though it’s a long, risky road from novel to film.  Never mind!  My readers love it and right now, that’s all I care about.

Kathryn Dahlstrom has been writing professionally for 21 years.  She began as a magazine short story writer and columnist and is the author of the Good News Club Series, a six-book fiction series for tweens and teens published by CEF Press  As a screenwriter, Kathryn was named a quarter-finalist in the American Zoetrope Screenwriting Contest and has had two scripts optioned by film companies.  She’s a member of the Screenwriting U Pro Series Alumni, the Minnesota Christian Writers Guild, the Screenwriter’s Network Worldwide, and the American Screenwriters Association.

Thanks so much, Kathryn, for being here today! I think Nephalim are fascinating (even mentioned them in California Demon … but no spoilers!).

Readers, are you a writer?  What’s your process for finding the core concept of your story?

I can’t agree more with you. Even though the movie has gotten tepid reviews, when I first saw the trailer for “Hansel & Gretel: Witch Hunters” I said literally aloud, “I *so* wish I had thought of that!” I felt the same way about “Wicked.”

Then you will notice it everywhere, simply since folks are genuinely receptive after you exude the
Tao Of Badass.