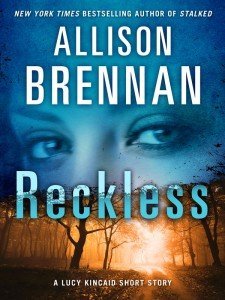 I’m thrilled to have Allison Brennan on the blog today … in case you didn’t know it, a new Lucy Kincaid story is coming March 12!  Pre-order Reckless now and you won’t miss a thing.

Read on, and learn all about Allison’s television addiction!

When I first got serious about writing, I was working full time and had three kids (I now have five!) and the only time I had to write was at night when the kids were asleep. But those hours were also my television time, and I’m a TV addict.

I love the movies, sure (and some movies just have to be watched on the big screen, like The Hobbit and Oz and Skyfall and Star Wars) but television is my true love. Sort of like movies are a stand-alone novel and television is a series – I love coming back week after week to my favorite television shows to revisit my favorite characters.

Because I was serious about finally finishing a book (I had over 100 beginnings and no endings!) I knew that I had to make sacrifices. The ultimate sacrifice was giving up television. I did it—I didn’t want television for three years.

There were minor exceptions. Renting a movie to watch with the family, for example, or my “reward” television—when I finished writing a book, I would reward myself with an entire season of one of my favorite shows on DVD. Then, my husband and I would have a marathon and watch the entire season in a week or two. That’s how I saw FIREFLY and LOST and DEADWOOD and HEROES.

Once I was able to quit my day job, I started up my TV habit again.

I am very heartened that over the last decade or so, television has really upped their game. Cable original programming has blown the doors off the “tried and true” (read: been there, done that) crime shows. (Aside: I love crime fiction, both reading and watching, so 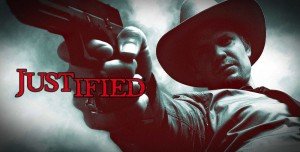 75% of the shows that I buy or DVR are crime-related.)

First, JUSTIFIED. I like to say I discovered this amazing and original F/X show and then told all my friends and it became a hit. (Ha, ha, ha.) Seriously, I watched it from the beginning solely because I heard it was based on an Elmore Leonard short story and he was consulting. I thought, “This has got to be good.” It is better than good. It’s one of the best shows out there today. Now nearing the end of its fourth season. (They usually announce in March whether the show is renewed – I am very optimistic it’ll be renewed, and it should be.)

Another? HAVEN, on the SyFy network. Found out it was based (loosely) on a Stephen King book (THE COLORADO KID) and I just had to watch it. Love it.

One benefit of shows like JUSTIFIED and HAVEN is that they are shorter seasons, usually 13 episodes, which gives a great over-arcing story without drawing it out too long. And, because it’s shorter, they don’t take the long hiatus that network shows do. Like BONES, GLEE, and GRIMM.

Speaking of GRIMM – this is one of my favorite shows. In the first season, it was on the fence for weeks about whether it would be renewed or not. Fortunately, it was, and I’m so, so glad. It can take 2 or 3 seasons for a show to really find it’s audience, and this was one of those different shows that takes awhile to find a place. But it’s great storytelling and writing and I’ve loved it from the beginning. My problem? They took three months off in the middle of season two. That frustrated me. But, because the show is so good, I forgave them (now that it’s back on!)

I still love the tried-and-true shows, don’t get me wrong! NCIS and LAW & ORDER: SVU are on my must-watch list. I didn’t think that SVU would survive Elliot leaving; I’m glad they did because Amaro and Rollins are two of my favorite characters. And now that SUPERNATURAL has regained its footing after fumbling seasons 6 and 7, I’m happy. I’m not a fan, in general, of sit-coms, but my daughters (19 and 17) and I love NEW GIRL.

THE WALKING DEAD has been hit or miss for me – I loved season one, but season two has been a little … not as good. I don’t know why! I think maybe because to maintain the intensity, they should have stuck with the fewer episodes a season. Because this show is Intense with a capital “I.” But I love Daryl! (Who doesn’t?) and I have season three waiting in the queue because everyone says season 3 rocks it. (NO SPOILERS! I’ll get out my crossbow and … just kidding. But seriously, no spoilers!) 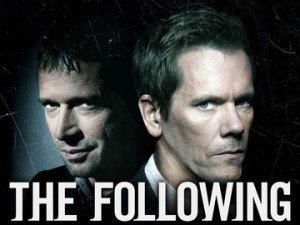 My new show of the year? THE FOLLOWING. Yes, it’s dark and gritty, but it’s oh-so-good with Kevin Bacon and James Purefoy and all the dark psychological drama I’ve always enjoyed, done well. Definitely not for the faint-of-heart! I’m also pleased that the network is limiting this to 13 episodes (last I heard) – this is one of those shows that can be a perfect one-season story arc without stretching or getting old.

And then … there’s something new coming out on March 18th! Like I need more television to watch … but the trailer to BATES MOTEL is so compelling, I suspect I’ll be watching next week. https://www.facebook.com/BatesMotelAETV

What about you? What show do you most want to see renewed for another season? Any show that’s worn out its welcome? What new show can you not wait to see? Let’s talk TV – my favorite addiction!

Allison Brennan is a New York Times and USA Today bestselling author of 20 books and numerous short stories. Her latest novella, “Reckless,” is out this Tuesday, followed by the sixth book in the Lucy Kincaid series, STOLEN, in June. She lives in northern California with her husband, five kids, and assorted pets. You can find out more about her and her books and links to facebook and twitter on her website, http://allisonbrennan.com

JK here: I’m not sure if I should thank or curse Allison for coming by … now I have more shows to add to my ever-growing pile!

Thanks for having me here today, Julie! 🙂

Absolutely! Thanks so much for coming by!