Military and Motorcycles: Tracey Cramer-Kelly talks about her Writing and her New Book out This Year! - J.K.'s place Skip to content

Home » Blog » Julie/JK's Books » Military and Motorcycles: Tracey Cramer-Kelly talks about her Writing and her New Book out This Year!

Today I’m very happy to welcome Tracey Cramer-Kelly to talk about her story and her new book, Take Two, which will be released this summer!

Hi Julie, and thank you for hosting me today! I’m writing from small-town Minnesota, where I live with my hubby and two kids, age 5 and 10. I work a full-time job, running our family motorcycle business. 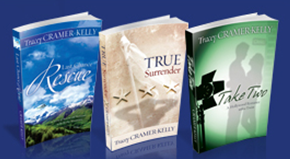 At heart I am a storyteller; I love digging deep into a character and exploring how things that happen in their life impact and transform them. I’ve published two novels (both of which have been winners or finalists in contests), and my third will release this summer.

I’m also a vocalist (I’ve released two cover songs and been featured on other albums) and play taiko drums, which is like a cross between martial arts and banging on BIG drums (great exercise!). I’ve even toyed with video and production; in fact, my second music video, featuring a female motorcyclist, was just released: http://www.traceycramerkelly.com/cool-rider-music-video/

There is no such thing as a typical day when you own a business and have active kids! So my writing time is “stolen” hours whenever I can get them. It makes it harder to get into the “flow” but I’m proof it can be done if you want it badly enough! I also daydream anywhere and everywhere, so that when I do sit down to write I have an idea where I want to go.

I spent five years in the National Guard as a paramedic, and that figures prominently in my writing. I’m also a biker chick, so I started writing motorcycle-riding characters. Because of my hobbies and my military background, I’ve had the fortune of meeting, working and playing with some very interesting people! I think everything I write is affected by what I’ve experienced. Yes, there’s a healthy dose of imagination and plenty of creative license, but a seed has to be sown somewhere, and for me it is often a ‘human’ interchange.

My first novel, Last Chance Rescue: a Story of Rescue and Romance in the Rocky Mountains, is about two members of a search-and-rescue team who have a problem trusting each other with more than their physical safety.

True Surrender is a military romance with a wounded veteran hero whose struggle with an amputation and PTSD nearly destroy his relationships and career.

I like to say that my second book True Surrender led to my third. The first video I produced (“The Rose / Surrender Version”) features scenes from True Surrender. The experience of seeing my writing come to life was exhilarating and empowering but also humbling. The seed for Take Two was planted then, but as is often the case, the characters told me what would happen next! 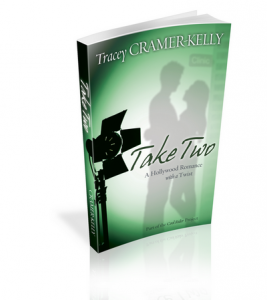 Take Two, expected to release this summer, is about an actor who is poisoned on set and forced to recover at the (rather older, ahem) director’s home with her two teenage daughters.

Starting March 6, I’m sharing a new “installment” of Take Two (for FREE) on my blog every week. I hope all you readers will come and enjoy this. Click here for details: http://www.traceycramerkelly.com/read-my-next-novel-for-free-heres-how/

Where to Stalk Me:

My “hub” is my web site: www.TraceyCramerKelly.com

Take Two installments will be posted to my blog: http://www.TraceyCramerKelly.com/blog

Special thanks to Tracey for coming on the blog today!

How about you? Any experience in the military or with motorcycles? (I had a tiny Suzuki motorcycle back in the day! Was sad to sell it, but I was never very good at it!).

[…] young adult novels, chick lit suspense and paranormal mommy lit, so it was especially fun to be the focus of her blog for a day. Her foray into “mommy lit,” Carpe Demon: Adventures of a Demon-Hunting […]