It’s #StarkOnSaturday — and that means it’s time for other snippet from the upcoming Claim Me, book two in the Stark Trilogy that began with Release Me. 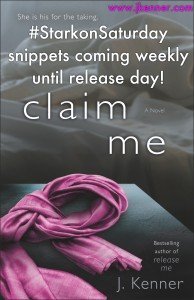 “Do you have any idea what I want to do to you right now?”

“I want to strip you bare and press you up against the glass. I want to trail my fingers over you lightly, just enough to make you awaken to my touch. I want to watch the lights of the Pier flash behind you, and I want to watch my own reflection in your eyes as you come.”

My mouth is dry, so the little “oh,” that I say doesn’t actually come out as sound.

“But that would be breaking the rules.”

I have to force myself not to whimper. “You’re playing games with me, Mr. Stark.”

“I suppose that’s fair, sir,” I say. “I’m yours, after all. At least for the night. But tomorrow, I’ll be a rich woman and the game’s going to have a new set of rules.”

For a moment, he is perfectly still. Then he nods slowly. “You raise a good point, Ms. Fairchild,” he says. “I need to make sure I get my money’s worth.”

“Did you read the article in Forbes I sent you?” he asks. “The reporter did a good job of describing my philosophy in business.”

“I read it.” In fact, I’d read it several times, savoring every tidbit I learned about Damien The Businessman.

“Then you know that I attribute much of my success to my ability to extract as much value as possible from every monetary transaction.”

I lick my lips. “And I’m a monetary transaction?”

“I see. And how do you intend to extract value?”

“You said you were going to make me come.”

His mouth curves into a lazy smile and the corners of his eyes crinkle. “So I did. Good girl. You get an A in class, after all.”

Come back next week for another snippet!

Claim Me will be on-sale April 23!

Want more? You can even pre-order Complete Me from Amazon or from Barnes and Noble!  On-sale July 30!

[…] Julie’s site on Saturday’s for another snippet! Stop by today & enjoy this weeks […]

Im thrilled about the early release. Thank you so much!

This has got to be THE BEST SNIPPET of anything, anywhere, anytime!!! My skin flushed and if I wasn’t sitting I would have THUDDED. Of this I am sure. Wow! Thank you…SO much!!!

Ugh, you’re killing me with these snippets! 🙂 Can’t wait for Claim Me!

LOL! should I say sorry?