Continuing the Mardi Gras vibe with Marcia King-Gamble (and a giveaway!) - Kenner. Skip to content 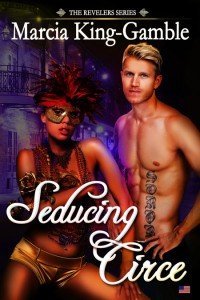 I’m all about the excitement of Mardi Gras and New Orleans! Today we’re still in the old French South with  Marcia King-Gamble, author of the Revelers series  with Michelle Monkou, who joined us yesterday. Marcia also has a giveaway for commenters…so keep reading!

I’ve got the fever – travel fever that is!

I figured I would continue the journey my collaborator, and friend, Bestselling author, Michelle Monkou, began yesterday.  Michelle and I are on a mission to take you to a faraway place with our steamy Mardi Gras stories set in exotic locales.

My travel bug began at age eight when I left my tiny, Southern Caribbean Island and headed for the United States.  I was so excited and so nervous that I never left my plane seat. I was awed by the clouds whizzing by and thrilled to be on a plane heading for a new adventure.

14 years later, I got offered a position as a flight attendant for an international airline. I was thrilled beyond belief. I’d made the cut, even though speaking a second language was a stretch for me.

From then on every penny of disposable income got squirreled away for the next international adventure. This was a love affair rivaling none. Oh the sights I saw, the foods I ate, and the people I met. It was the best finishing school ever.  I went to places like Saudi Arabia, New Zealand, and Hong Kong.  I pub crawled in Kansas City, flew over the glaciers in Alaska, and bought lobsters in Portland, Maine. I partied with rock stars and actors, and served kings and queens on my knees. (No joke here!)

Naturally when Michelle came up with the idea to serve up romantic, carnival-themed reads, I jumped on it. These were all places I’d been. Carnival was a part of my culture and writing about it was a natural for me. I chose New Orleans as a setting because Mardi Gras in The Big Easy is associated with fun.  New Orleans is a city of mystery, tradition and culture. It’s got it all going on.

Its origins can be traced way back to medieval Europe.  Then in the 17th and 18th centuries the French introduced Boeuf Gras – Fatted Calf.  The colonies quickly got with the program and Mardi Gras was celebrated openly in New Orleans.  Society balls quickly became the norm and that led to today’s Mardi Gras balls. It took a full one hundred years for the first street maskers to appear, and presto, the parades that exist today were born!

Almost anything goes at Mardi Gras and revelers will do almost anything to get those beads. The more beads you have draped around your neck, the more you probably have exposed.  So when you shout, “Throw me something, Mister,” be prepared to bare your breasts and more.

Marcia King-Gamble hails from a sunny Caribbean island where the sky and ocean are the same mesmerizing shade of blue.

This former travel industry executive is a national bestseller with almost 30 books to her credit. She has written for Harlequin, Kensington Publishing, BET, and St. Martin’s Press. Visit her web page, Twitter, and Facebook page!  Leave a comment.

Great thanks to Marcia for joining the blog!

She is giving away a copy of the novella and a Mardi Gras mask to a randomly-selected commenter below! Let us know what you think and be entered to win!

Thank you Shante, I think you will enjoy Seducing Circe. Think New Orleans at Mardi Gras and a sexy Cajun hero!

I think you can’t go wrong with a New Orleans setting – it’s so exotic and atmospheric. And it sounds like in this story we’ll have a true insider’s view of what really goes on during Mardi Gras. What fun!

Thanks for the vote of confidence Allison Chase. Seducing Circe is romantic, and suspenseful. The Mardi Gras setting adds to the intrigue. The first Novella is Carnival Temptress written by the awesome Michelle Monkou!

Marcia, you have certainly traveled the globe and have lots of entertaining anecdotes to share! I can’t think of a better team than you and Michelle Monkou to take us away with a seductive Mardi Gras story. Seducing Circe is a fabulous read and I’m happy to say I got a first hand peek at it!

Thanks so much Sophia Knightly. The comments by a talented author are much appreciated. Readers visit Sophia on Facebook and pick up one of her reads. You might want to “like” her heroine, Francesca’s adorable dachshund, Romeo while you are at it. Romeo has his own page.

like the premise of Mardi Gras stories set in exotic locales

Thanks. Michelle and I are very excited about our series! We’d love your feedback.

It sounds like your real life story is every bit as fascinating as the stories you write! Nice to have a built-in reference library! I’m going to check this series out, it sounds like a whole lot of fun! Thanks ladies!

Admittedly, I’ve had a pretty exciting life. Michelle and I would be delighted if you checked out the series. Thanks so much for stopping by! Glad to have you here!

I love, love New Orleans, Marcia. I can’t go there enough. Best of luck to both you and Michelle on this series!

Thanks, Carol! New Orleans is a great city. Thanks for the good wishes!

Hi. I have read some of you and Michelle’s romance novels. You are great authors. I can’t wait to read Seducing Circe. I have been to New Orleans once, but not for Mardi Gras. I know you both will write sexy, romantic and interesting characters from your vast travel, experience and knowledge. Keep writing wonderful stories.
Pam

I’m a little late to the party but I’ve read most of your books and just wanted to say how much I’m looking forward to Seducing Circe! You are a Carnival, Marcia and I’m sure this series with Michelle will be th best yet!
Sandra

So nice to have you here! Thanks for the very nice words. It means a lot from a talented author such as yourself.

Miss you and love you!

Thank you so much. You are sweet. Please be sure to give us your feedback after you’ve read the novellas. We love hearing from fans.