Interested in a Sports Hero? Vanessa Kelly gives us the Scoop on Writing Sports Romances (and a contest!) - J.K.'s place Skip to content

Aren’t baseball and football players hunky? They sure make great heroes for romance novels. Here to share her experience writing sports romances is Vanessa Kelly! For a chance to win two of her athletic hero novels, read on!

Hi, Julie!  Thanks so much for having me on your blog today—it’s great to be here!  For those of you who don’t know me, I write historical romance as Vanessa Kelly.  But I’m also part of a husband and wife writing team that goes by the pen name of VK Sykes.  Those joint books are sexy contemporary romances, mostly set in the world of major league sports.  Much to our delight these sports romances—all but one self-published—have been doing very well. 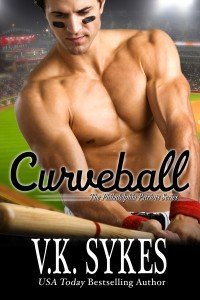 But here’s the interesting thing—we’d heard for years from various editors and agents that sports romances were “box office poison.”  That unless you’re Susan Elizabeth Phillips, nobody wants to read about hot athlete heroes or immerse themselves in the uber-masculine world of dressing rooms, playing fields, Nascar racetracks, or competitive alpha males.  According to the powers that be, nobody wanted to read those types of romances.

Good thing that hubby and I never listened to that advice, because our experience with sports romances has been just the opposite.  Readers love them, as I’m sure authors like Jaci Burton, Marie Force, and Belle Andre will tell you.

I actually believe there’s a subtle form of sexism in the assumption that women don’t like sports romances, i.e., that sport is primarily a male domain and that women just don’t like all that macho, nasty stuff.  Women, in fact, are avid watchers of most professional sports in North America, especially football and baseball.  That being the case, why wouldn’t they be interested in sexy athletes as heroes?

Fortunately, through the wonders of self-publishing, we’ve been able to bring those sports romances to our readers, who are clearly more open minded than some in the traditional publishing world give them credit for.  In fact, there are so many authors these days who wrote books that were rejected over and over again by publishers as too different or not marketable, and who’ve gone on to achieve real success by self-publishing those very same books.  Thank God for that, because it means a greater diversity of reading material for all of us and what could be bad about that?

What about you?  Do you think the powers-that-be are off track?  Do you like sports romances, or do they make you break out in hives?  One person who comments will win a copy of our soon to be released book, Curveball, plus the first book in our sports series, Fastball.

A synopsis of Curveball, book 4 in the Philadelphia Patriots series:

Taylor Page has never wanted anything but a career in major league baseball.  Through talent and guts, she’s clawed her way through the ranks of league management to land a position as Assistant General Manager of the Philadelphia Patriots, the team her father once scouted for.  The only problem is that most men in baseball still don’t take a woman exec seriously, especially a thirty-year old blonde with no on-field experience.  She needs to do something big to convince her bosses she has what it takes to manage a team.

Veteran Pittsburgh outfielder Ryan Locke knows his career is in jeopardy when a suddenly unreliable throwing arm comes on top of rehab from a major injury. He’s had a solid run—especially at bat—but he’s not a star with a mega-contract.  As a single parent with a troubled daughter and an alcoholic mother to provide for, retirement is out of the question. Ryan’s best hope is for a trade to an American League team as a designated hitter, allowing him several more years of play.

When Taylor needs to find a replacement for an injured first baseman, she comes up with an innovative but risky idea:  convince her boss to make a trade for Ryan Locke, and then convince the still talented slugger to play first base for the Patriots.  Unfortunately, Ryan is dead-set against that plan.

With both their careers on the line, neither Taylor nor Ryan can afford the explosive physical attraction between them.  But despite Taylor’s best efforts to resist Ryan’s campaign of seduction, she’s not sure she’s got to willpower to keep from playing along. 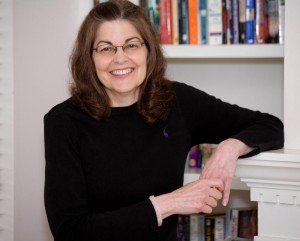 Vanessa Kelly writes USA Today bestselling contemporary romance with her husband under the pen name of VK Sykes.  She also writes award-winning historical romance under her own name, and was named by Booklist as “one of the new stars of historical romance.”  You can find her on the web at www.vanessakellyauthor.com or www.vksykes.com.

Much thanks to Vanessa for her post! Remember to comment for a chance to win her novels Curveball and Fastball!

Hi Julie! Great to be here today! There’s been some price matching going on with Amazon, so Fastball is now on for free. Run on over there and grab it, folks! That being the case, I’ll be giving away a copy of one of our other books, Hot Number, to someone who comments today.

Thanks so much for coming by!!!

I love sports romances. The editors and agents are off track!

I love sports romances there is nothing sexier than a healthy male who is good at what he does so yes I think they are off. I also think more men read romance than they give credit but hey what do I know. Keep writing and I’ll keep reading.

Thanks, Donna! My hubby certainly reads them!

I love a good sports romance. The hotter the better and this looks fantastic. Thank you for the opportunity to read the snippet.

Christine, I admit that our books are pretty hot!

That is the only way I like it, keeps my romance at home with my husband always going strong. We never get bored. 🙂

Thanks for the fun post ladies! I’ve just now gotten back into reading sports romance. Not to date myself but the last sports themed romance I read was an SEP Chicago bears! LOL…

Amusingly though I am not much of an athlete, I do love reading sports romances–maybe it’s that whole living vicariously thing 😉 I’ve heard good things about yours, and have also loved SEP’s, Bella Andre’s, Jill Shalvis’s, and Jaci Burton’s. Looking forward to reading more!

flchen1, I’m SO uncoordinated it’s not funny, but I love hot sports heroes – and that list of writers!

I’ve read some of Vanessa’s sport romances and loved them. I’m not much of a sports fan, but you don’t need to be. A tall sexy athlete, yum!

Thank you so much, Julie!

You are so very welcome!

I think the editors and agents are WRONG! I love sports romances. From baseball to American football to European football (soccer) to hockey- I love them all. I’ve read this series and can’t wait for this next book to come out. I just glanced at my library and I have at least 15 books that are romances centered around sports. I also have several NASCAR books that I haven’t had time to read yet, so you can add another 10 to my total.

Keep it up Vanessa. I’ve loved everything you and your husband have written together. I look forward to many more sports stories. 🙂

Bless you, Heather!! I’m so happy you liked our books!

I love all romances including sports romances.

It’s great having so much variety, isn’t it, Judy?

After reading Better than Beckham

Hi Vanessa, The first one of your sports romances I picked up was Better Than Beckham. I enjoyed it so much, I had to have all the others. They are great stories. While waiting patiently for the next one, I reading a kindle bundle of your historical romances and loving them. Keep these great books coming!

Patricia, you’re the best – thank you!!

I love sports related stories. Just finished Jaci Burton’s Thrown By A Curve. It was great! Plus these covers are just delicious!

Thanks for stopping by, bn!

Congrats on the upcoming release. I enjoy watching sports, so I definitely enjoyed sports romances. I’m thinking now that Adam Scott has won a major there might be more golf heroes being written.

I think golfers would make great heroes, Jane. We actually have a golf book called CaddyGirls, but it’s the heroine who is the golfer. The hero is a high-tech millionaire. And love Adam Scott!

Thanks for stopping by, Desiree!

Thank u for the post and heads up. I have loved all of the sports romances I have ever read. Lisagk@yahoo.com

I like sports romances that focus on the people, with the actual sports as lesser focus. I am the person who says, “Football? That’s a sport, right?” So of course, I married into a sports-centered family. Thank goodness for romance novels to read during the games!

I love a good sports romance, Susan Elizabeth Phillips is one of my fave sports romance author. I’d love to read one of yours too! Thanks for the chance to win!

I love sport romances, especially hockey books. I really wish more people would write them. It’s the best of both worlds for me being an avid sports fan and a romance lover.

Who doesn’t love a man in uniform?! I love Sports Alphas!! This series sounds wonderful!