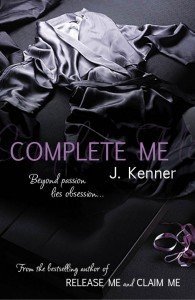 Again, keep in mind that it’s impossible to post the first chapter of book 3 in a trilogy without inherent spoilers.  So keep that in mind if you keep reading!

Enjoy!!!  And be sure to pop in on Saturday for the renewal of #StarkOnSaturday leading up to the release of Complete Me.

Note that this chunk has not yet been copyedited.  It may change slightly in wording, punctuation, etc. between now and publication:

If you missed the beginning, read the first chunk here!

“Damien,” I whisper, because I can’t wait any longer to feel his name against my lips.

That wide, spectacular mouth curves into a slow smile. He tugs my hand, pulling me onto his lap. His thighs are firm and athletic, and I settle there eagerly, but I don’t lean against him. I want to sit back enough that I can see his face.

“Do you want to talk about it?” I know what his answer will be, and yet I hold my breath, praying that I am wrong.

I smile as if his words are sweetly romantic, refusing to let him see how much they chill me. I need his touch, yes. But I need the man more.

I stroke his cheek. He hasn’t shaved since yesterday, and the stubble of his beard is rough against my palm. The shock of our connection rumbles through me, and my chest feels tight, my breath uneven. Will there ever come a time when I can be near him without yearning for him?  Without craving the touch of his skin against my own?

It’s not even a sexual longing—not entirely, anyway. Instead, it’s a craving. As if my very survival depends on him. As if we are two halves of a whole and neither can survive without the other.

With Damien, I am happier than I have ever been. But at the same time, I’m more miserable, too. Because now I truly understand fear.

I force a smile, because the one thing I will not do is let Damien see how terrified I am of losing him. It doesn’t matter; Damien knows me too well.

“You’re scared,” he says, and the sadness that colors his voice is enough to melt me. “You’re the one person in all the world I cannot bear to hurt, and yet I’m the one who put fear in your eyes.”

“You forget that I’ve seen you in action, Damien Stark. You’re a goddamn force of nature. They can’t possibly hold you. Maybe they don’t know it yet, but I do. You’re going to walk away from this. You’re going home a free man. There’s no other way that this can end.” I say the words because I need to believe them. But he is right. I am desperately afraid.

Damien, of course, sees through my bullshit. Gently, he tucks a strand of hair behind my ear. “You should be scared. This is the kind of case that has prosecutors salivating.”

“But you were only fourteen,” I say. “And you didn’t kill Merle Richter.” I still don’t understand why the court decided to try Damien as an adult. All I know is that it was a battle that Damien’s defense team lost.

His expression darkens. “Truth is a malleable thing, and once I walk into that courtroom, the truth is what the court says it is.”

“Then you need to make sure the judges know the real truth. Dammit, Damien, you didn’t kill him. But even if you did, there were mitigating circumstances.” Only recently had Damien told me what happened. He and Richter fought, and when Richter fell, Damien held back, refusing to step forward to help the coach who’d abused him for so many years.

“Oh, Nikki.”  He pulls me against him, his arm swooping around my waist and shifting me on his lap so quickly that I gasp. “You know I can’t do what you’re asking.”

“I’m not asking anything,” I say, but the words sound brittle, because of course I’m asking. Hell, I’m begging. Damien damn well knows it, too. And yet he is denying me.

Anger flares within me, but before it explodes, his mouth crushes against mine. The kiss is deep and raw and all-consuming, and warm desire blooms within me. It doesn’t erase my anger or my fear, but it does soothe it, and I shift closer to him, wishing I never had to leave the safety of his arms.

His body tightens beneath mine, the bulge of his erection under his jeans teasing my rear as I shift my weight and lean closer, deepening this kiss and wishing like hell we were in our suite instead of in a very public bar.

After a moment, I pull back, breathless. “I love you,” I say.

“I know,” he says, and though I wait for the reciprocal words to come, he doesn’t say them back to me.

My heart twists a little, and I force a smile. A pageant-quality All I Want Is World Peace kind of smile. The kind of smile I show the public, but not Damien.

I tell myself that he’s just tired, but I don’t believe it. Damien Stark does nothing without a purpose. And though it is impossible to truly get inside that head of his, I know him well enough to guess at his motivations, and I want to jump to my feet and scream at him. I want to beg him not to push me away. I want to shout that I get it; that he’s trying to protect me because he knows that he might lose the trial. That he might be ripped from me. But goddammit all, doesn’t he know that all he’s doing is hurting me?

I believe with all my heart that Damien loves me. What I fear is that love isn’t enough. Not when he’s determined to push me away in some misguided attempt to protect me.

So I don’t lash out. That’s not a fight I can win, but I can play the game my own way.

With renewed resolve, I kick the wattage up on my smile and slide off his lap, my hand extended to him. “You have to be in court at ten, Mr. Stark. I think you’d better come with me.”

He stands, his expression wary. “Are you going to tell me I have to get some sleep?”

His gaze slides over me, and my body quivers in response as if he had physically touched me. “Good,” he says, and that one simple word not only conveys a world of promises but takes the edge off the chilly fear that has filled me.

I allow the corner of my mouth to quirk up into a hint of a smile. “Not that, either. Not yet, anyway.”

The confusion on his face brings a genuine smile to my lips, but he doesn’t have the chance to ask, as the concierge has approached. “Everything is ready, Ms. Fairchild.”

My smile broadens. “Thank you. Your timing is perfect.”

I take the hand of the very confused man that I love and lead him through the lobby, following the concierge to the front of the hotel. There, parked on the street beside a very giddy valet, is a cherry red Lamborghini.

Damien turns to look at me. “What’s this?”

“A rental. I thought you could use a little fun tonight, and the A9’s just a few miles away. Fast car. German autobahn. It seemed like a no-brainer to me.”

“Boys and their toys?”

I lower my voice so that the concierge can’t overhear. “Since we already have some interesting toys in the room, I thought you might enjoy a change of pace.”  I lead him closer to where the valet stands by the open passenger door. “I understand she’s very responsive, and I know you’ll enjoy having all that power at your command.”

“Is she?”  He looks me up and down, and this time the inspection is tinged with fire. “As a matter of fact, that’s exactly what I like. Responsiveness. Power. Control.”

“I know,” I say, and then slide into the passenger seat, letting more than a little thigh show as I do.

An instant later, Damien is behind the wheel and he’s fired the powerful engine.

“Drive fast enough, and it’s almost like sex,” I tease. And then, because I can’t resist, I add, “At the very least, it makes for exceptional foreplay.”

“In that case, Ms. Fairchild,” he says, with a boyish grin that makes this all worthwhile, “I suggest you hold on tight.”

Want more? Tune in tomorrow for the conclusion of the chapter.  And  you can pre-order Complete Me from Amazon or from Barnes and Noble!  On-sale July 30!

Claim Me — which is now in it’s third week on the New York Times bestseller list — is already available! Get your copy here:

And if you missed book 1, Release Me (now in its 11th week on the USA Today bestseller list!) you can snag your copy from your favorite retailers here: