Ever Tried Writing a Book with Another Person? Marla Hayes and Angela Falkowska talk about Their Collaborative Writing! - J.K.'s place Skip to content

Collaborative writing is both really enticing to many of us, but also quite nerve-wracking! How do you go about writing a story when there’s another brain involved? Marla Hayes and Angela Falkowska join the blog today to tell us how!

What does it take to make a collaboration successful? 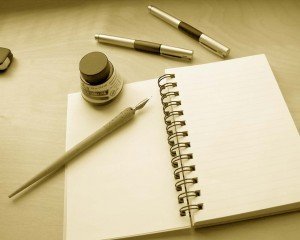 Like any good partnership, it comes down to one little letter — it’s “we”, not “I”. In a collaboration egos must be thrown out into the cold — some would say this should be easily accomplished for us since my collaborator Angela Falkowska and I both live in Canada where it’s cold half the year. But we don’t just compliment each other (although this IS important to do), but more importantly we complement each other, in many ways.

How did this creative union occur? We met on the web, completely by chance, when an interview with a famous screenwriter was cancelled.  We Canucks were somehow left out of the notification process, so once the only other attendee signed off the site, we waited on, e-chatting and discovering that we lived in the same province. The natural connection progression was exchanging e-mails. Next time we reached out, we learned that we had many, many things in common, some of which had nothing to do with screenwriting. We decided to test the proverbial creative waters and collaborated. Ten years later, here we are, co-authors of A TASTE OF REALITY.

We have written four feature-length scripts together, three different ways — never let it be said that our methods are conventional or boring:

2) We write alternate scenes and switch back and forth, again creating the blurring of authorship.

3) Since I had some raw gems shoved to the back of my filing drawers, Angela wielded her magic editing wand over them to polish them to diamond status. And with each collaboration the writing skills we feel are our weakest are pumped up as if we had worked through an intensive, lengthy screenwriting course.

It’s stressful to allow one’s “baby” to be molded and reworked into what can sometimes be a totally different entity. That’s where the other essential quality of a partnership like ours comes into play: TRUST. Trust not just in the other person’s integrity, opinion and character, but in their talent.

Now with the publication of our first novel, A TASTE OF REALITY, we have added a new dimension to our collaboration — the novelization of a screenplay. 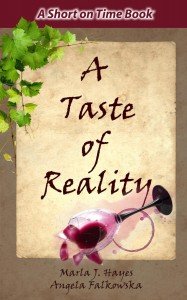 At first glance, that might sound like a task as easy as changing all the present tense verbs into past tense. Yes, we did have to do that, but there were more changes needed to accomplish the reformatting of the story.

Screenplays are written to keep movie-goers’ attention from many points of view. The plot unravels from many characters’ perspectives. Novels, especially those for Tweens or even younger readers, usually have one main character. Two at the most. To reformat the script, you may have to eliminate scenes, a secondary character or even change the order in which events happen. That can mean cutting down on the number of words or it can cause you to write a new scene or chapter to smooth out the story.

Too, scripts always, always use as few descriptive words as possible. Dialogue reveals the story and moves the plot along. When changing that same story into a book, it is descriptive words that must be used to paint a movie in the novel reader’s head. But paragraph after paragraph of description will bore even the most dedicated book reader — finding the right balance between description and dialogue is truly one element screenwriters and writers of books have in common.

Write on! Read on!

For A TASTE OF REALITY on Amazon, click here!

See both Marla and Angela on Goodreads!

Thanks to Marla and Angela for sharing their experiences as collaborative writers! What kinds of things have you written with one or more people?