What's In A Word? Judy Gill on Historical Research and Writing! - J. Kenner Skip to content

Word usage can change a lot over the years! Judy Gill joins me today to share the research she must do for her historical novels!

historically speaking, that is.

What a great opportunity I’ve just been handed, a chance to reach out to people through Julie’s blog and I know a lot of folks read it, so here I am, ready to run off at the mou—er—fingertips.

Most of the time, I focus on my own writing, but on occasion, I edit for some clients and would like to share a few tips about some irregularities I’ve recently found in historical manuscripts. As readers, you can watch for them then do a little “nya-nya” at the authors if you want. I know when I make boo-boos, there are a few eagle-eyed folks out there who delight in letting me know. I don’t mind. It always helps keep me on the ball. As authors, if you’re doing any historical writing even involving relatively recent eras, look out for the following words I’ll mention because they’re so ingrained in our daily speech, they’re not really obvious as mistakes. I use several references. including the Merriam-Webster online dictionary that dates words by their first usage. 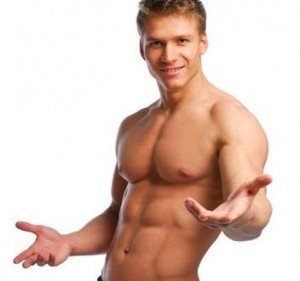 This does not mean when they first became common in our everyday speech, so beware of that, too. Just because men can be accused of having “testosterone” fits when they get all manly and arrogant today, doesn’t mean you can safely use the comfortably familiar term for their actions in say, 1750, or 1890 or… well, even in 1934 because that particular hormone wasn’t even discovered until 1935!

But, enough with the hormones—there are a couple of other words I see used all too often in works that take place prior to their actually coming into usage. Most notably, “hello.” It seems few people remember (or may never knew) hello is a word invented by Alexander Graham Bell for use in answering his new invention, the telephone. The word was first used in 1877, possibly by Thomas Edison, who used it when answering the telephone (whereas his business rival Alexander Graham Bell used to shout “Ahoy!”). 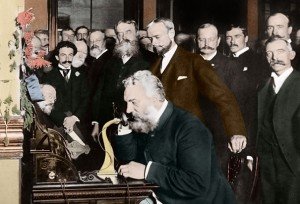 Whoever invented it, Edison or Bell, it was created for answering the telephone and has no real meaning, as in it doesn’t equate with good morning, good day, how are you, or any of the other greetings used prior to the invention of the telephone.

Earlier, I wrote about readers’ comments when I make errors in syntax or grammar or fact keeping me “on the ball”. That flows easily off the tongue or from the keyboard and many think it’s a modern term meaning “to be alert” and may be closely linked with baseball, but evidence shows otherwise: In 1864 Schoolboy Days, a British publication included this scene: 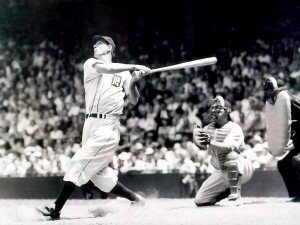 “Ellis seized the bat with a convulsive clutch… Remembering Ernest’s advice, he kept his eye on the ball, and hit it so fairly…” Seems Ellis was playing cricket or rounders, and here were are thousands of miles and a couple of centuries later, using his phrase. And he might not have been the first one to use it, either.

Judy Griffith Gill www.judyggil.com has recently finished Refuge! book one of a four-book Speculative Fiction series entitled The Stories of Storn, with book two, Dirtsiders,  well underway. When book two is farther along, she’ll put Refuge! up either as an Independent publication on Amazon Kindle Select. She’s still, well… speculating.

For a full list and links, visit http://www.openroadmedia.com/authors/judy-g-gill.aspx. Her own blog https://judyinthejungle.wordpress.com appears at irregular intervals where she speculates on the question “Why is it…”

Many thanks to Judy on her insightful blog post! What things do you say day-to-day that are relatively new?