The Giant English Mastiffs: Anna Markland on their History, their Practicality, and their Lovability! - J.K.'s place Skip to content

Home » Blog » Please Welcome: J.K.'s Guests » The Giant English Mastiffs: Anna Markland on their History, their Practicality, and their Lovability!

Are you a fan of these huge cuties? Anna Markland joins me on the blog today to give us the scoop on English mastiffs. Keep reading for their fascinating history!

Before we get too deeply into this, I have to come clean. I am not a dog lover. Cats—yes. In my upcoming release, Haunted Knights, readers will meet a lovable brindled kitten named Topaz. 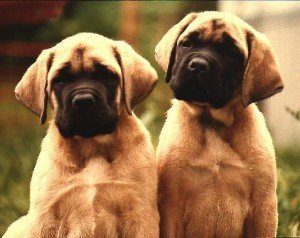 However, I digress! I became fascinated with the dog breed known as English mastiffs after I introduced a pair of them into my novel, If Love Dares Enough. Boden and Brigantia belong to the Melton family. One of them takes a shine to the hero, Hugh de Montbryce, and is also responsible for saving the life of the heroine, Lady Devona Melton.

There are several theories as to where the Mastiff breed originated but it is generally believed that the British created the breed as it is known today. There is evidence of Mastiff-like dogs dating as far back as 2500 BC in the mountains of Asia. Bas-reliefs from the Babylonian palace of Ashurbanipal (now on display in the British Museum) depict Mastiff-type dogs hunting lions in the desert near the Tigris River.

Marco Polo wrote of Kubla Khan, who kept a kennel of 5,000 Mastiffs used for hunting and war. When Hannibal crossed the Alps, he took with him several battalions of trained war mastiffs, who, during their long travels, “fraternized” with local breeds to produce what became the St. Bernard, once called the Alpine Mastiff, as well as other giant breeds. 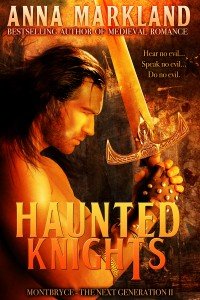 All of the massive mountain dogs of Spain, France, Turkey, and the Balkans can trace their size back to Mastiff blood in their ancestry. Even the Chow Chow carries Mastiff blood, as does the Pug, which was originally a form of dwarf Mastiff.

Phoenician traders are believed to have introduced the Mastiff to ancient Britain. When the Romans invaded Britain, they took dogs back to Italy and used them to guard property and prisoners as well as to fight in arenas. Other sources indicate that Mastiffs were used as war dogs by the ancient Celts, and accompanied their masters into battle.

Despite the differences of opinion on where the Mastiff originated, most agree that the British are the creators of the breed as we know it today. Of all the countries that used the Mastiff, it was the British who kept him in his purest form, and it is to them that we owe the Mastiff of today.

They kept Mastiffs to guard their castles and estates, releasing them at night to ward off intruders. They accompanied soldiers into battle and, during the Elizabethan era, Mastiffs were used to fight large game, including bears and tigers, usually for the entertainment of the Queen.

Henry VIII is said to have presented Charles V of Spain a gift of 400 Mastiffs to be used in battle. The Legh family of Lyme Hall, Cheshire, who were given their estate by Richard II (1377-1399), kept and bred Mastiffs for many generations. 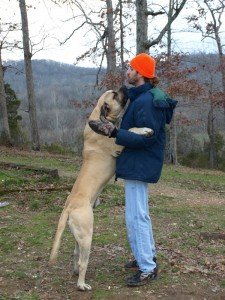 Stowe’s Annual, a reference book, shows that King James I (1603-1625) sent a gift of two Lyme Hall mastiffs to Phillip II of Spain. These, or their immediate descendants, are certainly the Mastiff-type dogs shown in famous portraits of the Spanish royal children.

By the mid-1800s, dog showing had become popular in England and the first recorded pedigrees for the Mastiff had begun with the Kennel Club of England. By the late 1800s, Mastiffs were being imported into North America where they were often used as plantation guards.

During the First and Second World Wars, Mastiffs were used to pull munitions carts on the front lines. During World War I, the breed started to decline in England and by the 1920s, the breed was almost extinct in that country—It was considered unpatriotic to keep dogs who ate as much in a day as a soldier and, as a result, entire kennels were put down. At the end of World War II, British fanciers began to import stock from Canada and the U.S. in order to revive the breed. Today, the Mastiff breed is well established with the greatest numbers likely being in the U.S. 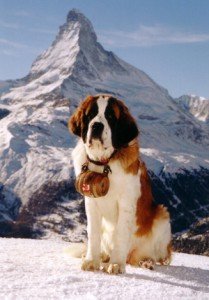 The Mastiff is a versatile working dog. His great strength was once used to turn water wheels, pull carts and carry heavy loads on his back. He was also originally used as a guardian and fighting dog. Today, Mastiffs are excellent companions and family members. They can be seen participating in various activities such as carting, tracking, weight pulling, obedience competition and conformation. They are also used as Therapy Dogs and in Search and Rescue.

The Mastiff is watchful, self-confident and patient. He is very devoted to his family and will protect both his family and property in a calm and dignified manner. While some Mastiffs tend to be aloof with strangers, others are fairly friendly. However, the breed has a strong guarding instinct and will always be very watchful of strangers entering the home and/or around his family members. His good nature, patience and calm, steady demeanour also means that he is generally excellent with children. The Mastiff needs human companionship and is not a dog to be left alone for long periods of time. 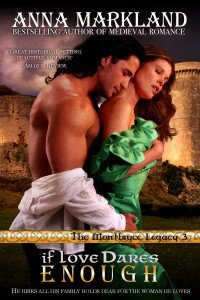 The Guinness Book of Records holder for the world’s largest dog is a Mastiff named Zorba. In 1989, when he was 8 years old, Zorba weighed 343 pounds and measured 37 inches at the shoulder. Good thing Boden didn’t weigh so much. Hugh had to carry him when his foreleg was sliced open by the villain’s sword!

Order IF LOVE DARES ENOUGH from one of these great retailers: 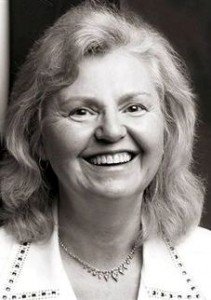 Anna Markland is a Canadian author who writes medieval romance about family honour, ancestry and roots. Her novels are intimate love stories full of passion and adventure. Following an enjoyable career in teaching, Anna transformed her love of writing and history into engaging works of fiction. One of the things she enjoys most about writing historical romance is the in-depth research required to provide the reader with an authentic medieval experience.

Born in England, Anna has lived most of her life in Canada. Besides creating intimate stories that revolve around the lives and loves of her characters, her other passion is genealogy, and she has written histories of many of the families she has researched. This has had a big influence on her fiction writing.

The mother of four grown children, she spends her time enjoying the beauty of Vancouver Island and the incredible beaches of Panama.

Thanks to Anna for her post! What kinds of breeds are you especially bonded to? Would you want a dog like the English mastiff?

Such noble dogs! I love hearing about the different breeds. The cover looks amazing! Thank you for sharing!

Thanks, Melissa. Great to see you here.
Anna

Great blog post, Anna! I loved learning more about the mastiff, especially their history. I’ve always been intrigued by the breed but never had the time to research them myself. Now all I need to do it bookmark this blog for easy reference. Thanks, Anna! And thanks J.K. for having Anna as your guest!

Great to see you here, Jacqui. Though I am not a dog lover, I grew quite fond of Boden and Brigantia as I was writing the book. Somehow adding a beloved animal into a story gives it a whole new dimension. A reader once told me she loved Conquering Passion because the hero talked to his horse! Hope you find the information useful in the future.