What Do Dystopians Teach Us? PJ Sharon on her Trilogy, YA Readers, and the Message Behind It All - J. Kenner Skip to content

Home » Blog » Julie/JK's Books » What Do Dystopians Teach Us? PJ Sharon on her Trilogy, YA Readers, and the Message Behind It All

With all of the hype about the end of the world lately, what do we gain from the doom-and-gloom of popular Dystopian novels and movies? Young Adult writer PJ Sharon shares her thoughts with us today, with a great take-home message!

Thanks for hosting me today, Julie. I’m excited to be here. I wanted to ask your readers if they are enjoying the wave of Dystopian entertainment that seems to be busting at the seams of late. From World War Z to After Earth, and Falling Skies to Revolution and the Walking Dead, fans of Dystopian gloom and doom are getting their fill. If you haven’t, just wait for this fall when The Dome (based on Stephen King’s novel) comes to TV. Of course, end-of-the-world and post-apocalyptic entertainment has been around for some time, all the way back to H.G. Well’s Time Machine and Ray Bradbury’s Farenheit 451, but recent literature and film has cashed in on the trend toward obsession about the topic. 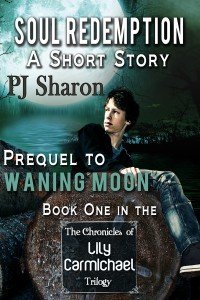 When I read Hunger Games three or four years ago, it seemed we were just on the cusp of a new wave of dystopian books, movies and TV shows. As a writer, I could appreciate the “jumping on the bandwagon” effect, but it seemed like more than that to me. Forgive me if this sounds a bit frou-frou to some of you, but I’ve felt an energetic shift happening in the past five years or so (we massage therapists can sense these things), and I wondered if this idea of an imminent end had become part of the global consciousness. You know…like how the Mayans and the Egyptians were building pyramids at the same time on opposite sides of the world. Maybe somehow, we are all connected, and we are all getting the same message at the same time. At least I and Jerry Bruckheimer were. (There are an appalling number of similarities between my books and the TV series Revolution—including names, places, and scenes—and yes, WANING MOON came out the week before the show began last year).

I haven’t read a lot of Dystopian literature because, a) It seems unlikely that it will be uplifting, and b) I really like the HEA ending rather than an ambiguous, safe-for-now kind of ending that I usually see in Sci-fi and dystopian lit. And frankly, life is depressing enough most of the time. So how on earth did I start writing a dystopian trilogy? I assure you, it wasn’t because of the success of the Hunger Games or any desire to hop onto the “dystopian bandwagon.” I was simply compelled to write it. 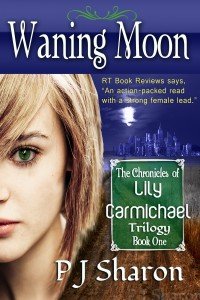 I moved out to the Berkshire Hills about seven years ago and began writing romantic fiction. It took me a few years and a few full length manuscripts to decide that I wanted to do this for a living and that I actually had enough talent and drive to do so. It also took me that amount of time to find out that my writer’s “voice’ was most suited toward writing for teenagers/young adult readers. I had plenty of real life experience from which to draw, and some valuable lessons and wisdom to impart. Writing YA was a way for me to give something positive to a future generation without being preachy. My first three published books came out of those experiences. They were contemporary YA romances, although one could argue that they are more New Adult than YA based on the gritty subject matter.

But about that time, I also began hanging out with folks who were prepping for the “collapse” and sounding less extremist and more practical as I watched the future unfold over the next few years in some scary ways (the Wall Street crash/banking debacle in ’08, the decimation of our environment because of climate change and man’s negative influences, increased intensity and frequency of natural disasters, ie: Katrina, the earthquakes in Asia, South America, and Haiti, etc., and the increased threat of global terrorism and political unrest around the globe). I’ve had lengthy discussions with people a lot smarter and more well-informed than me, and I shudder to think of the looming catastrophe if the scale tips one more inch in any direction. If you want to see what that might look like, just turn on your TV or go to a movie. Although zombies are our least likely threat, replace zombies with a “Super-bug,” collapse of infrastructure, or catastrophic climate change and the zombies might seem preferable.

I can recommend a few good books on all of the above subjects. Most are pretty grim. But what I’ve noticed they all have in common, is the idea that humans can…and will survive. I’m not naïve enough to think that desperate people won’t revert to their baser natures given the right circumstances, and I’m one who likes to prepare for worst case scenarios, but I do think that we have an opportunity to show our children that doing the right thing will never go out of vogue, and that each of us has gifts that we can use to overcome the most desperate of times. 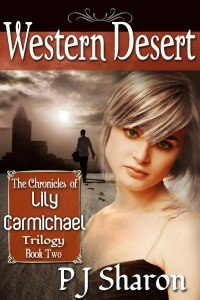 So here’s the thing. Like most of these other writers of dystopian fiction, I’m an optimist. I believe humanity has the capacity to pull together and heal this planet, or at least survive the fall out of our self-destructive path once we are forced to make a drastic change. I often ponder what it would take to survive, and it comes down to one thing for me…love. Love of the planet, love of life, and love for one another. I’m still a romantic at heart and believe that “Love conquers all,” and that we are all capable of heroism. That is the message that I want to impart to our next generation. And that’s why I wrote WANING MOON and WESTERN DESERT, with the culmination of the trilogy coming out next spring.

Basically I wrote the Chronicles of Lily Carmichael trilogy to show readers that no matter how tough life gets, there is always hope…because every teen deserves a hopefully ever after. Don’t you think? 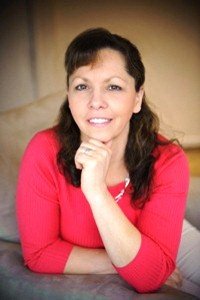 PJ Sharon is author of several independently published, contemporary young adult novels, including Molly finalist, HEAVEN IS FOR HEROES, FAB Five finalist, ON THIN ICE, and SAVAGE CINDERELLA, Winner of the 2013 HOLT Medallion Award and the 2012 National Excellence in Romance Fiction Award. She is excitedly working on The Chronicles of Lily Carmichael, a YA Dystopian trilogy. WANING MOON, Book One, is a finalist in the National Excellence in Romance Fiction Awards for the YA Category. Book Two, Western Desert is also now available.

Writing romantic fiction for the past eight years and following her destiny to write…because every teen deserves a hopefully ever after, PJ is a member of  RWA, CTRWA, and YARWA. She is mother to two grown sons and lives with her husband in the Berkshire Hills of Western MA.

I just love PJ’s message and her reason for writing dystopia! What do you guys think about this current trend of books and movies?

Thank so much for having me today, Julie. I look forward to responding to your readers. Your books look great. I’ll have to check them out. Don’t forget, WANING MON is available today only for FREE to Kindle users at
http://tinyurl.com/m9xgq3k

and SOUL REDEMPTION, the short story prequel can be downloaded for FREE from Smashwords at:
https://www.smashwords.com/books/view/309550

Of course, that was WANING MOON, not MON…oh, boy, it’s going to be a long day:-)

Great piece, PJ and Julie. I think everyone deserves a hopefully ever after because hope keeps you striving. Best of luck with the Lily trilogy PJ!!!!