A Pre-Apocalyptic Tour of Los Angeles: Richard Preston on the Chronicles of the Pneumatic Zeppelin - J.K.'s place Skip to content

Home » Blog » Please Welcome: J.K.'s Guests » A Pre-Apocalyptic Tour of Los Angeles: Richard Preston on the Chronicles of the Pneumatic Zeppelin (and a contest!)

Those iconic places that make Los Angeles the place it is today – where did they come from? What will happen to them in 400 years? Today Richard Preston joins me to give us a fabulous tour of L.A. and introduce his apocalyptic series set there. Read on for the chance to win 2 of his signed books!

A PRE-APOCALYPTIC TOUR OF LOS ANGELES

Los Angeles, like every big city, has her share of famous landmarks.  I thought it would be fun to take a brief tour of the LA landmarks which appear (in vastly ruined and or altered form) in Romulus Buckle and the City of the Founders, which is set in a snowbound Los Angeles in the year 2432. 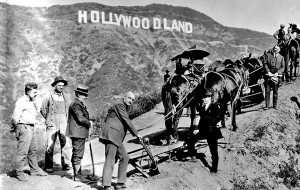 Probably the most enduring symbol of the American film industry, the genesis of the Hollywood sign had nothing to do with movies.  The first sign, designed by architect Thomas Fisk Goff in 1923, read as ‘Hollywoodland’ and was part of a real estate advertising campaign for a housing development in the hills above Chinatown.  Located on Mount Lee in the Hollywood Hills section of the Santa Monica Mountains, the letters were 50 feet tall, constructed of wood and sheet metal hauled up by mules, and lit with 4,000 light bulbs.  In the early 1940s, the sign caretaker Albert Kothe was drunk and drove off the cliff behind the “H,” smashing it along with his 1928 Model A (Kothe was not injured).  As the sign gained fame, the Hollywood Chamber of Commerce ordered the “LAND” letters of the sign removed in 1949 so it would represent the town and not the housing development.  The sign was renovated in 1978 (rocker Alice Cooper led a huge public campaign to help restore it) and the new letters are 45 feet tall and made entirely of steel.

THE GRIFFITH OBSERVATORY and the ASTRONOMERS MONUMENT

Another huge LA landmark, located in the Santa Monica Mountains not far from the Hollywood Sign, is the gorgeous Griffith Observatory. The sprawling art deco structure sits on the south-facing slope of Mount Hollywood in Griffith Park, overlooking the Los Angeles basin.  Colonel Griffith J. Griffith donated the park land to the city on December 16th, 1896, and also provided funds for a public observatory, exhibit hall and planetarium.  The observatory first opened to the public on May 14, 1935.  The 12-inch Zeiss refracting telescope is always pointed at something interesting, and you can always take a look for free.  More people have looked through the Griffith observatory telescope than any other telescope in the world.

On the front observatory grounds stands the Astronomers Monument, a large concrete sculpture which pays homage to six of mankind’s greatest star watchers: Hipparchus, Nicholas Copernicus, Galileo Galilei, Johannes Kepler, Isaac Newton and William Herschel.  The monument was designed by local artist Archibald Garner; he and five other artists were commissioned to sculpt one astronomer each (one of the artists, George Stanley, also created the famous ‘Oscar” statuette for the Academy Awards). 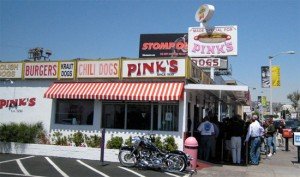 Located on N. LA Brea Avenue in Hollywood, this famous hot dog restaurant has been operating since Paul and Betty Pink set up a pushcart near the corner of La Brea and Melrose in 1939.  The chili dog—anchored by Betty’s homemade chili recipe and the mighty Hoffy-brand hot dog in its natural casing—could be had, topped with mustard and onions, for ten cents apiece.  The Pinks family built the current restaurant in 1946.  Frequented by celebrities, I heard that Matt LeBlanc used to purchase a dog there regularly. 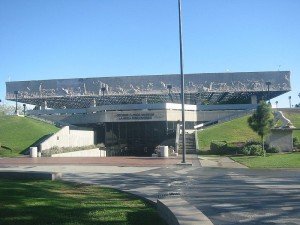 The La Brea Tar Pits are located in Hancock Park (or, more accurately, Hancock Park was built around the Tar Pits) in Los Angeles.  Asphaltum or tar (brea in Spanish) has seeped up from the ground here for thousands of years.  The quicksand-like, watery-surfaced tar can either resemble a pond or be obscured by thin coatings of leaves, dust and debris so it looks like solid ground.  Thousands of animals were trapped and entombed in the tar, including mammoths, dire wolves, short-faced bears, ground sloths and the saber-toothed cat (Smilodon, the state fossil of California).  The George C. Page museum is dedicated to researching the tar pits and exhibiting the specimens found there.  The Los Angeles County Museum of Art (LACMA) is located adjacent—and dangerously close to the tar pits, in my opinion.  Anyone growing up in Los Angles will experience a class field trip (or several field trips) to the Page, and we all remember rolling down the steep, grassy embankments that flank it.

BUT, IN THE WORLD OF THE PNEUMATIC ZEPPELIN… 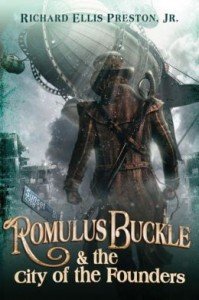 In the year 2432, over three hundred years after an alien invasion of Earth and the resulting apocalypse and ice age, the Hollywood sign still stands; it is the symbol of a clan territory now—the Alchemists—and they have refurbished it, largely with canvas and wood.  The patched-up ruins of the Griffith observatory now serve as the Alchemist clan stronghold and the telescope still functions, though its purpose has changed.  The Astronomers Monument is still there, weathered, but no one knows anything about the six male figures chiseled on it.  A collapsed building stands in ruins at the corner of Melrose and La Brea—the Pink’s sign still visible—but it means nothing to anyone who might see it.  In contrast, the La Brea Tar Pits are vital to the reconstructed metropolis known as the City of the Founders, which is built around the Page Museum.  We shall witness how the Tar Pits have shaped the Founders clan as their culture and society emerge in later books.  Also, a pack of nasty sabertooth beasties shows up in Book Two (Engines of War)—but they are alien creatures, not resurrections of our friendly neighborhood Smilodons from Hancock Park.

For a chance to win two signed copies of Richard’s books, click on a Rafflecopter giveaway and comment! 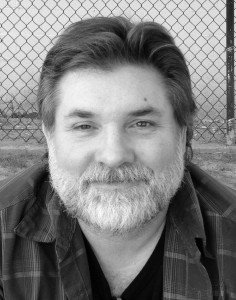 Richard Ellis Preston, Jr. is fascinated by the steampunk genre, which he sees as a unique storytelling landscape. Romulus Buckle and the City of the Founders is the first installment in his new steampunk series, The Chronicles of the Pneumatic Zeppelin. Richard has also written for film and television. He lives in California.

Great thanks to Richard for such an interesting post! What is your favorite landmark? What would it be like to see it in 400 years?

They are a lot of fun to see — I especially like the Tar Pits! Thanks for commenting!

Thanks for commenting! I like the Tar Pits the best.

Oops – the first response was slow to publish – thought I messed it up – oh, well!

I can’t believe only 9 people have entered this giveaway. That means my chances of winning one of these two books is pretty good. Thanks for hosting this giveaway, J.K. and thanks to Richard for putting up the goods! I hope I win! ^_^

Hi Todd – thanks for commenting and I hope you win too!

Hello.This post was extremely fascinating, particularly because I was looking
for thoughts on this issue last Tuesday.