Please welcome T. M. Simmons to the blog! I think you’ll find her methods for researching a book both unique and fascinating!

Ghost Hunting for Research and Writing

Most people beat-feet in the opposite direction if they spy a ghost. Not me. I’ve actually been known to prowl graveyards in the dark, with only a flashlight for protection. Actually, I also use the flashlight to communicate with the ghosts. You can see me doing that with some other paranormal investigators at the url in my bio, which is after this blog.

The first time I went “ghost hunting,” I wasn’t really afraid. The culprit who started me on this new life journey was my aunt, Belle Brown. Aunt Belle is more like a sister to me. We got kicked out of different bars together, but that’s a long-ago story and I didn’t record it. Anyway, I just assumed I’d watch Aunt Belle chat with unseen people, since her ability was well-known in our family. Was I ever wrong. 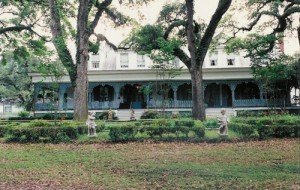 She and I went to the haunted Myrtles Plantation in St. Francisville, Louisiana, on our first trip.

Aunt Belle is only four years older, but she believes she’s boss. Before we even got to St. Francisville, she said, “Since you’re the writer of our duo, write down what all we experience.”

It didn’t take much urging on her part. Within a few minutes of our arrival, I was jotting down notes of the paranormal energy I began experiencing. I didn’t want to forget even one of our encounters.

At the time, I was still writing historical romance, and I also absorbed scads of history. What I soaked up on that first trip had a bearing on my writing veering into paranormal romance. I even set a book, Witch Angel, in St. Francisville.

I’m one of those people who, when they find enjoyment in a new experience, dive into it wholeheartedly. Realizing I had psychic gifts, I searched out local classes where I could learn and enhance my abilities. Over the years, I studied under a local psychic and a Native American Spiritualist. I went to Circles and absorbed just about everything I had time to read about my new interest. Of course, I also continued to chase after ghosts as often as I got the chance.

This knowledge and practice soon had an impact on my writing. I noticed I could lose myself even more easily in that world in my mind, and I understood it resulted from getting in touch with that sixth sense. Some of what I learned and continue to practice is:

Meditation: As part of communicating with ghosts, I meditate often. Meditation releases stress and allows me to focus less on the physical body, more on the subconscious. I’m a firm believer that it helps release our creativity from restraints. It can also lead to an answer to a manuscript block. Many times before I go to sleep, I meditate on some plot point that just won’t gel. The next morning, the solution I woke up and groggily wrote on a piece of paper on my beside table is usually waiting for me.

Talking to Ghosts: Writers talk to their characters telepathically. It helps us develop them into real people for our readers. Over the years, I’ve learned to trust what the character tells me. I might not know exactly why a certain item or twist popped into the manuscript, but it wasn’t long before I realized it was there for a reason — one which would become clear later. I remember a gold locket that showed up in a beaver pond in one book….

Although once in a while I do actually hear a ghost’s voice, 99% of my conversations with them are telepathic. I have to pay close attention, because likely as not, that voice in my head is faint, just as that character’s voice is. Distinct ghost voices are extremely rare; most of what I hear audibly is caught in what are called EVPs (electronic voice phenomena), which are digital sound recordings. A person doesn’t actually hear most EVPs as they happen. The digital recorder picks up spoken words understandable during playback

Seeing & Feeling Ghosts: Another thing I experience as a paranormal investigator is seeing actual apparitions. Most are infrequent, usually extremely brief sightings, perhaps only a split second or two. Others can last for five or ten seconds…or longer when I concentrate. When I began experiencing apparitions, one of the first things someone else would ask was: “What did the ghost look like?”

When I take time to reflect, it’s amazing what my writer’s mind can capture in that brief period. Describing a ghost to someone else in order to try to make them also see it is similar to getting our characters down on paper well enough to be visible to our readers. Like with writing, I’ve learned to sit down as soon as possible and make notes. Doing this with ghosts has enhanced my recall ability, since it’s infrequent and I don’t want to forget even a tiny bit of the experience. Even in a brief sightings, I can usually remember the height and build of the entity, hair color, facial features, clothing and period style, as well other features. I also often sense the apparition’s personality and attitude from his or her body language.

Once a group of other paranormal investigators and I were in the majestic but deteriorated Baker Hotel in Mineral Wells, Texas. 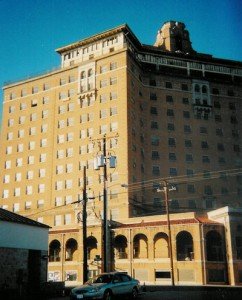 I had wandered off alone in the basement, ending up in what used to be the men’s locker and shower room. All of a sudden, I stood stunned as a naked man stepped out of a long-unused shower stall across the room from me. My camera hung forgotten around my neck as I stared at him: six muscular feet of gorgeous male, blond hair, blue eyes, and a towel draped around his neck. Dribbles of water still rolled here and there down his tanned body. He saw me looking at him, gave me a lazy wink, then…disappeared. But not from my memory or from communication. With the heightened abilities I was gaining through my study of the paranormal and meditation, my Muse and I chatted with that ghost off and on for months, while I wrote his story in my paranormal mystery, Dead Man Haunt. 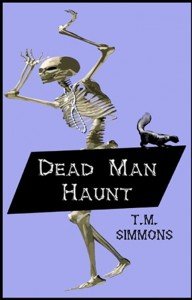 I have a ghost here in my office: Martha. Many times, when I write something I feel is rather good, she comes out and gives me a hug of agreement. Rather than scare me, this feeling gives me confidence.

After many years of experience in the paranormal, as well as learning protection measures against some of the nasty entities I encountered, I formed my own group of paranormal investigators, Supernatural Researchers of Texas (SRT):

My crew members are all creative types — writers, a digital design artist, musicians — and all have branched out into more than one artistic area. They talked me into teaching what I call my Psychic Development Class, which we hold every two weeks. At first, I shared fundamental ways to begin to develop their psychic senses. Now we’ve begun studying video classwork of other spiritualist mediums, something that I also enjoy. We’ve found opening various aspects of our sixth sense also enhances our other abilities, some pertaining to writing, and not just for the journals we keep about our meditations. Other aspects assist in the craft side of our endeavors. Each and every one of us use what we learn in the class to help us in our chosen artistic path.

Ghost hunting isn’t just something I do to scare myself silly … or sillier. It helps keep my senses honed and my writing sharp.

T. M. Simmons has been chasing ghosts for many years. She writes about her experiences in her diaries, Ghost Hunting Diary I through V, and working on VI. She also fictionalizes them in her Dead Man Mysteries and short stories. All are e-books available on Amazon, BN, Smashwords, Kobo, Apple, Sony and other e-book sites.

For more information about her and her books, check out her web sites at http://www.iseeghosts.com or http://www.tranamaesimmons.com. Her blog is at http://www.iseedeadfolks.blogspot.com, where she posts weekly updates on her writing and paranormal experiences.

The talking to ghosts video is at http://tiny.cc/ba9ls

Thanks to T. M. Simmons for guest blogging!

Have you ever had an experience with a ghost? Was it comforting or bone-chilling? Somewhere in between? Leave a comment below!

Thanks so much for coming by! This is such a fascinating post!!