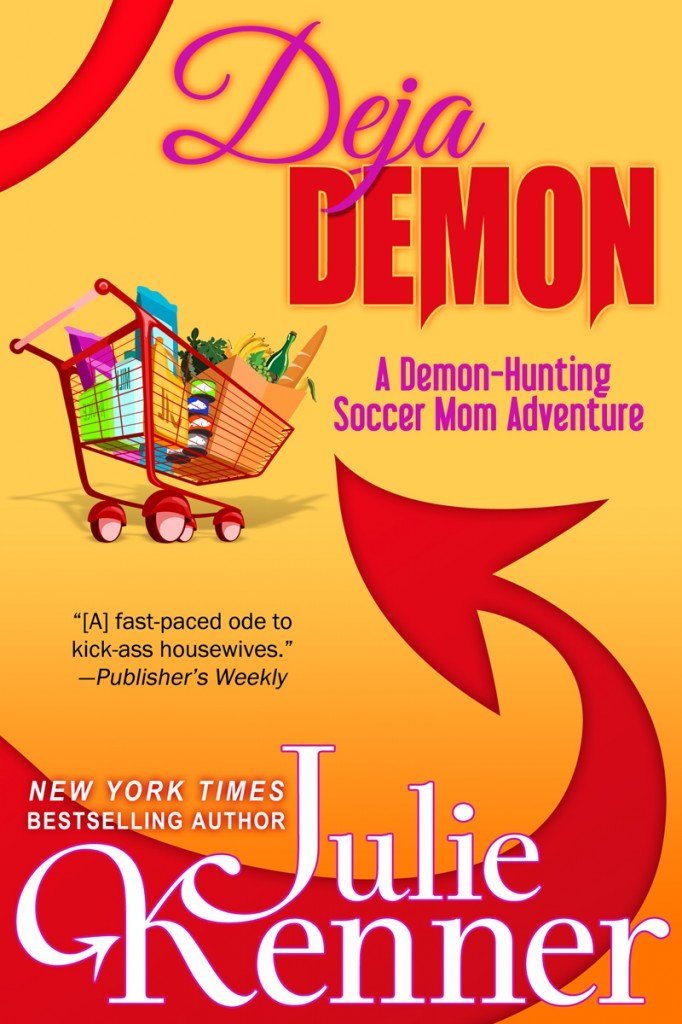 I’ll grant you that a soccer mom (or even a demon hunting soccer mom) doesn’t have quite the sex appeal factor of Damien Stark, but then again, Kate Connor already has two men in her life — her current husband and her dead husband who’s come back to life in the body of another man.  So I’m not sure she could handle Damien anyway (and he’s already got a woman, thank you very much!)

But while you wait for tomorrow’s #MostWantedMonday and the re-commencement of #StarkOnSaturday (because we have to count down to the December novella, Take Me), I thought that starting #SoccerMomSunday would be a fun thing to do!

If you’re not familiar with my Demon-Hunting Soccer Mom series already, Deja Demon: The Days And Nights of a Demon-Hunting Soccer Mom is the fourth book in the series, and I’ve just re-released it in e-format with an awesome new cover!  In September, I’ll be re-releasing book 5, Demon Ex Machina.  And then in October (just in time for Halloween!) I’ll have a brand new Kate Connor book, Pax Demonica!  I can’t wait!

This series is one that’s dear to my heart.  Not only is it so very close to my own life, what with the mommy-dom and the mini-vans and the demon hunting (oh, wait; that’s supposed to be a secret), but this was my first Big Book Sale and also my first movie option!  In fact the series is still in development with 1492 Pictures (Chris Columbus of Harry Potter, Home Alone, Adventures in Babysitting, and more!).  They’re awesome there, and I know if anyone can bring Kate to the screen and do her justice, it’s the folks at 1492!

I’m also thrilled that the world of indie publishing now exists because when the series was dropped by my publisher I didn’t really have an option for continuing the series.  Now I can continue to write Kate’s adventures and get them to readers.  And I couldn’t be happier!

So here you go with the first #SoccerMomSunday — I hope you enjoy!

When I was fifteen, Eric and I found a demon’s lair and stopped the creature from becoming both corporeal and invincible.

When I was sixteen, I located a nest of vampires in Prague and took them out with the help of a local schoolteacher and a handy-dandy blowtorch.

When I was nineteen, I heard rumors that a succubus was preying on Swiss men. Eric and I investigated, took the bitch out, and still had time to ski the Alps before reporting for duty back at the Vatican the next Monday.

With a resumé like that, you might think that I could tackle any task, handle any emergency, totally hold it together in a time of crisis.

Apparently not. Because this damn bunny fiasco had pretty much put me under the table.

“No, no, no,” I said into the phone, enunciating as clearly as possible. “It really needs to be a bunny. Who’s ever heard of the Easter chicken?”

“Makes sense to me,” the guy at the other end of the phone said. “Ya got eggs, doncha? So why wouldn’t you have a chicken?”

I extricated myself from that conversation as quickly as possible, then immediately dialed Laura. Not for moral support. Not for suggestions. But for that most basic of primal needs—whining.

“It will all work out,” she assured me. “Honest. These things always do.”

“How? How do they work out? Timmy is convinced this party is all about him, I have a swarm of women descending on my house in three hours, demons are trying to kill me— which wouldn’t be unusual except that they now have zombie cohorts, and unless I think of a solution fast, the kids are going to be getting baskets for the egg hunt handed to them by Freddy the Easter Chicken. Honest, Laura, I really don’t see it getting better any time soon.”

“Stuart is the answer to your prayers.”

I held the phone away from my head and stared at it, as if somehow she would be able to sense my disbelief through the phone wires. “I love the man, don’t get me wrong. And there have been times when I’ve thought that very thing. But if you think that Stuart is going to step up to the plate and spend hours on the phone locating an Easter Bunny for me, then you obviously haven’t been spending time with the same man I married.”

“There are no costumes. There are no actors. There is a complete moratorium in the world on bunnies.” I could hear my voice rising to a hysterical pitch. Zombie parts on my kitchen floor, no big deal. But toss me into a domestic crisis, and you’d think the world was coming to an end. Clearly, I needed to get a grip.

Want more? You can snag the whole series at a variety of retailers, with more coming very soon:

I was JUST talking about your books with a friend! We were discussing Buffy the Vampire Slayer and what would happen to her next.
I think this is a good time to revisit this series and I am so glad to have found your blog.

yay!! I’m thrilled you found it too! Thanks for posting!