Please welcome Mindy Klasky to the blog! Mindy is giving away an electronic copy of her book Single Witch’s Survival Guide to a lucky person (chosen at random) from the comments section!

In the great movie “The Paper Chase”, formidable law school professor Charles W. Kingsfield says, “You come in here with a skull full of mush and you leave thinking like a lawyer.”  In my case, I came into law school with a school full of wanna-be-lawyer mush, and I left thinking like a writer.

It wasn’t my fault.  My class on the Federal Rules of Evidence was one of the most boring academic endeavors I’d ever undertaken.  (And I wrote college papers on Moby Dick and Henry James’s The American, so I know boring…)  No, Evidence class was so boring that I resorted to scribbling poems in the margins of my notebook.  Those poems took shape over the course of the semester, and before I knew it, I had written a prophecy in rhymed iambic hexameter – the perfect basis for a fantasy novel.

I wrote the rest of that fantasy novel during my first few years working as an associate at a major Washington, D.C. law firm.  I edited it one summer, while I litigated an antitrust case in Kansas City, Missouri.  I tracked down an agent, hoped for an editor, and went on to write another novel, all while I learned my craft as a lawyer.

Sure enough, though, my legal career leaked into my writing.  My first published novel, The Glasswrights’ Apprentice, culminates in a sort of trial scene.  (Alas, you’ll never read the iambic hexameter prophecy novel – it was great training, but not great writing.)  My category romance, The Mogul’s Maybe Marriage, has a legal obligation for the hero to marry at the core of its corporate-stock-control subplot.  One key plot point in my As You Wish Series (about a genie who grants wishes to women working in the professional theater) turns on an obscure contract.

In fact, that contract conceit worked well enough that I used a substantial variation in my 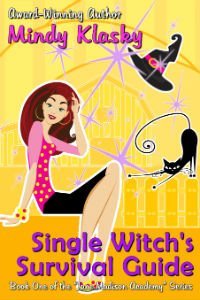 most recent novel, Single Witch’s Survival Guide.  The first volume in my Jane Madison Academy series, Single Witch involves a school for witches.  Within days of the institution’s founding, the students and teachers at the Jane Madison Academy find themselves bound by an impossible contract – complete with obscure WHEREAS clauses, overly vague DEFINITIONS, and possibly-unconscionable legal obligations.  The fun of the book turns on the witches finding their way through the legal mumbo-jumbo on their way to building a true community of magic.

In the end, I think Professor Kingsfield was right.  I do think like a lawyer.  But when those thoughts range from traditional fantasy to category romance to light women’s fiction, I’ll accept that burden.

What about you?  Are you influenced by your education and/or professional training when you choose books to read or write?

Mindy Klasky learned to read when her parents shoved a book in her hands and told her she could travel anywhere in the world through stories. She never forgot that advice.

Mindy’s travels took her through multiple careers – from litigator to librarian to full-time writer. Mindy’s travels have also taken her through various literary genres for readers of all ages – from traditional fantasy to paranormal chick-lit to category romance, from middle-grade to young adult to adult. 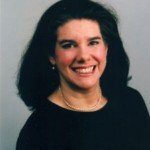 In her spare time, Mindy knits, quilts, and tries to tame her endless to-be-read shelf. Her husband and cats do their best to fill the left-over minutes.

A big thanks to Mindy for blogging with us today! Don’t forget to answer MIndy’s question: “Are you influenced by your education and/or professional training when you choose books to read or write?” A free copy of Single Witch’s Survival Guide to one lucky commenter!

No I am not influenced by them. Thank you for the giveaway!!!!

Yes, I am usually influenced by my education/career when choosing what to read, but my taste is very eclectic. Thank you for the giveaway! 🙂

Thanks so much for coming by, Mindy!

I am sometimes influenced by my educator/career when I choose what to read.

[…] she admits in a recent blog post, “Evidence class was so boring that I resorted to scribbling poems in the margins of my […]