Linda Thomas-Sundstrom: “How to Survive a Curse . . . Or not.” One lucky commenter wins a novella! - J. Kenner Skip to content

Home » Blog » Please Welcome: J.K.'s Guests » Linda Thomas-Sundstrom: “How to Survive a Curse . . . Or not.” One lucky commenter wins a novella!

Please welcome LindaThomas-Sundstrom to the blog!

Hello there. I’m Linda, and I’m joining you today to see what you know about shedding a curse, or avoiding one.

No, not the four-letter-swearword kind of cursing, as in “what the frig?” The real kind. Evil eye, whispered words with evil intent, being the recipient of voodoo doll pins in all the wrong places, being trapped within a stone form for 364 days a year on the roof of a cathedral. To name a few.

Curse: Also called a jinx or hex, a curse is any expressed wish that some form of misfortune will befall another entity, be it a person, a place, or an object. It can be inflicted by any supernatural powers such as spell, prayer, magic, witchcraft, God, a natural force, or a spirit.

with the Evil Eye of a little Italian woman who didn’t like something she’d done. In a best-selling author’s funny mystery series, the lead character fears her boyfriend’s relative because of Evil Eye rumors. But those are comedic versions of something that can be a stunningly more serious. Still, do we tend to believe any of that, for real? Maybe just a little?

What if the “spell” was as serious as it gets, and involved the rest of your life?

What if you happened to be the middle-man in a battle between the forces of Light and Dark, and need to find a way out of the spell binding you?

Okay. I know those are heavy questions. *wink* But not all curses and spells are the Bewitched TV show kind. Nor are all spell-singers witches with big lack caldrons.

Some spells can linger forever, I suppose . . . if you can’t find a way out.

So, can there be a way out? A way to avoid a curse, or at least manipulate one?

Rules of reversing or eliminating a curse is called a “removal” or “breaking,” and usually requires elaborate rituals or prayers (so says Wikipedia). Yes, you could duck quickly when a spell comes your way, if you knew it was coming. You might wear a rubber suit, so that spell bounces off without sticking. Or you could enlist the help of a curse-breaking professional.

Another movie comes to mind here. The title was “Bell, Book, and Candle” starring Kim 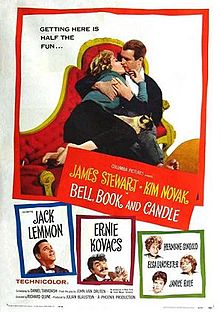 Novak and James Stewart. Great movie about a witch putting a love spell on a guy, that the guy eventually finds out about. He then does whatever it takes to shed the spell – in a specific ritual for love spells that includes drinking a vat of terrible smelling stuff.

But what if removing the spell could be manipulated, but not broken, in a loophole that allowed the spell to be passed along to someone else? And that other person was someone you loved?

I had to think hard about all of this when writing my new novella “Trapped In Stone,” out this month. The genre is urban fantasy, with a hefty dose of romantic emotion weaved in. 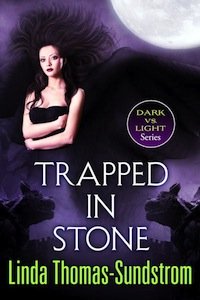 The idea for this hit me when I climbed to the top of Notre Dame Cathedral in Paris, to the Gallery of Chimeras on the rooftop… and saw all those really spooky stone gargoyles and chimeras that overlook the city. I just knew there was more to those stone creatures than met the eye, and I was right. Inside one of the chimeras, trapped in stone, was a man waiting for the one night per year he would be set free, in order to find a replacement for himself on that gallery. He had manipulated the curse on that rooftop by taking the place of a woman trapped there before him. He had volunteered to set that woman free, and now has to curse someone else in order to free himself.

But can he commit some other poor soul to this kind of purgatory? Invite them to share this stone state of limbo, surrounded by other creatures that also will be freed on that same night with the purpose of stopping him from manipulating the curse further?

If the forces of Dark and Light are involved, drinking something nasty to remove the curse would be a joke. And this is no joke for Tristan, or the woman he once set free who remains by his side, waiting for the one night when he returns, so that she can again feel his flesh against hers.

It has been one wild ride to the surprising finish.

I hope you’ll read “Trapped In Stone” and find out if such a curse can be broken, in the end, and if true love can prevail over danger and sacrifice. That info might come in handy some day, especially if you climb the stairs to that very real and disturbing gallery.

And well. I’m here to chat today about magic, books, or whatever. Need a love spell? A recipe for calming family feuds? Age-old advice for getting rid of a sore throat that I found in Wales?

Connecting is what this writing gig is all about, so please leave a comment or a wave. I have my magic wand ready… (LOL)  and am giving away a novella from my backlist to one lucky commenter.

Glad to be here. Cheers for now –

Linda Thomas-Sundstrom is an award-winning author of paranormal romance and urban fantasy for Kensington Brava, Dorchester, Amazon Montlake, and Harlequin Nocturne. Linda lives in the West, is a teacher by day and a writer by night, and swears she has “paranormal” in her genes. Her new novella is “Trapped in Stone,” available September 1. “Hot Holiday” follows in November. Visit Linda at her website or chat on Facebook.

Be sure to answer Linda’s question: what kind of spell would you cast if you could? Linda is giving away a novella to one lucky commenter!

Good morning spell-casters! Can’t wait to hear what you have to say! And Happy Friday.

So glad to have you on the blog today!

is everybody out shopping? Or in the case where I live, trying to outlive the heat-wave? LOL
*sweating nicely*
Linda

a spell to travel around the world

Here’s a spell for world travel:
Need: 1 orange candle, a length of copper wire as long as your arm, a stick of lavender, sandalwood, or lemongrass incense, a neck chain, or length of leather thong, a blue bead with a hole in it that is large enough to thread the chain or thong through.
When to do the spell: on a Wednesday morning, preferably at dawn.
What to do: Place all items before you. Wrap, in the copper wire around the candle from base to tip, in a spiral. Thread the chain through the blue bead (the traveler will wear this as an amulet). Breathe on the amulet 7 times, each breath with more energy – and say a manifestation prayer about wanting to travel.