MJ Fredrick On Her Love for Post-apocalyptic Entertainment - J. Kenner Skip to content

My husband and I LOVE entertainment with post-apocalyptic themes. I think the first book we both fell in love with in the genre was The Stand, which remains my favorite Stephen King book. Good vs. Evil, man vs. man, though there are supernatural elements at play.

We’re mad fans of The Walking Dead, both the graphic novels and the show. We recently re-watched World War Z, which I understand is WAY different from the book, but was still so good.

My husband just finished playing a video game called The Last of Us, which was really interesting, because it was a lot like a movie. Sure, you make some decisions, but all of them lead you down a particular path.

What was particularly interesting in this game was that while there were zombies, they didn’t seem to be the biggest threat. The biggest threat was what other humans would do to survive. This game is dark, y’all. My husband had days where he could only play it for a few minutes because it was so intense. It really made you ask yourself what you’d do in those situations.

We loved the show Jericho, again with the man vs man theme, and the movie Independence Day, though that was more about bringing people together.

I love Hunger Games, and even more? The Life As We Knew It series by Susan Beth Pfeffer. That book is in my head YEARS after I read it. It’s about the moon being struck by an asteroid and knocked out of orbit, and the effects on Earth, all from the POV of one girl (first book) and one boy (second book.) I’ve not read the third yet, and I understand there’s a fourth. Really great story, though.

I had all these things in my head when I was writing Eden’s Promise, my first post-apocalyptic book set after a terrorist attack knocks out the infrastructure. I wanted to keep the man vs man theme, so there are no paranormal elements, just a study of how I think certain people would act in certain situations.

My heroine is Eden, who lives on an island off the northwest coast and whose father is a doomsday prepper, something she’s grateful for when the worst happens. But what he does to protect his supplies bothers her. But when she travels to the mainland in search of her sister, she knows why he’s done what he’s done.

What about you? Do you like post-apocalyptic stories? Do you like the ones with supernatural elements, or not? What’s your favorite post-apoc book, movie or show? 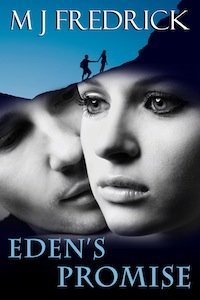 century technology. But on an island off the coast of Oregon, Eden McKay’s small town is safe and sound. But when Eden’s ill mother wants to see her other daughter before she dies, Eden must leave the safety of her home to find the sister she hasn’t seen in four years.

The only one to help her is Aaron Jenkins, the Navy SEAL who’s just made his way to the island after months of fighting his way across the mainland. After what he’s seen on the mainland, all he wants is the peace of his family’s home. He doesn’t want responsibility for himself, much less another person. But he can’t let Eden go on her own. She’s determined, but she’ll never survive on her own.

Together they set off for the mainland, where wild dogs and mercenaries are the least of their problems, where they have to fight a mad man and search for a needle in a haystack, where the danger is not just to their well-being, but to their hearts.

MJ Fredrick knows about chasing dreams. Twelve years after she completed her first novel, she signed her first publishing contract. Now she divides her days between teaching elementary music, and diving into her own writing–traveling everywhere in her mind, from Belize to Honduras to Africa to the past.

She’s a four-time Golden Heart Award finalist, and she won the 2009 Eppie Award with Hot Shot and the 2010 Eppie with Breaking Daylight.

A big thanks to MJ Fredrick for guest blogging today!

Don’t forget MJ’s question: What is your favorite post-apocolyptic book, movie, or TV show? Share your thoughts in the comments!

So excited to be here today! Unfortunately I have jury duty so will check in when I can!

Ooooh! I never get selected to be on a jury. Have a good time being civic 🙂

And thanks for being here!

I bet it would be hard for a lawyer to be on a jury!

Hey–I didn’t realize you had this post-apocolyptic side/. I JUST learned about the SINGER side of you. Sounds like a great book. Have fun with jury duty.

Lol, Jane, this book was in my head for years before I felt confident enough to write it. It kind of fits in with my actiony books, I guess–they have lots of obstacles to overcome!