There’s nothing like a Cowboy! Jodi Linton tells us why Cowboys are special - J. Kenner Skip to content

Home » Blog » Please Welcome: J.K.'s Guests » There’s nothing like a Cowboy! Jodi Linton tells us why Cowboys are special

“Courage is being scared to death, and still saddling up anyways”-John Wayne

This is such good advice, and not just for cowboys. It applies to the ups and downs of being a writer. Tired minds, sore fingers won’t stop a writer. We put our chins up and we venture down a long, twisted road in order to meet the character that will ignite a fire.

Two years ago I was lucky enough to find my muse in Laney Briggs—a smart-mouth Texas deputy who can duke it out with the big boys while tangling one sexy good-timing Texas Ranger around her finger. I was saddled up, nose-deep at my laptop, listening to Miranda Lambert’s “Gunpowder and Lead” when Laney popped into my head. I wanted a heroine that women could relate too, but I also wanted her to kick ass.

Welcome to Pistol Rock, Texas where everyone knows the one rule of thumb, secrets only last about as long as the sporadic west Texas rain showers.

Laney Briggs has a pretty sweet job as a deputy in her sleepy hometown of Pistol Rock, Texas. Everything’s fine and dandy until her ex, Texas Ranger Gunner Wilson, decides to stick his boots in Pistol Rock’s first murder case. The troublesome cowboy’s rugged good looks and T-shirt straining muscles have always left Laney in hot water. As the body count starts to rise in her small town, Laney is forced to ask the lethal bad boy for help. 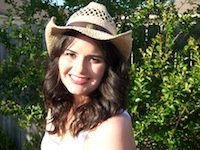 Like Laney, I grew up in a small Texas town. I married a small town boy who occasionally is known to strut a pair of cowboys boots while hitting the open road with the other love of his life—his Jeep. Like I said, there’s nothing like a cowboy!

I will be releasing with Ignite an Entangled Imprint in March 2014. 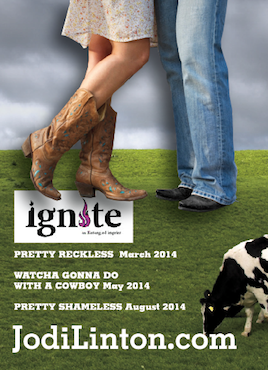 Jodi Linton lives and works in Texas, with her husband and two kids. Pretty Reckless is her first novel. She is currently at work on her next Laney Briggs adventure.

So why are cowboys so special? What makes a cowboy so appealing? Give us your thoughts in the comments!

Thanks so much for coming by today!!

Thanks for having me on, Julie! Maybe at the next chapter meeting we can finally meet. You’re always jet setting, and I’m always at home without a sitter.