Lyndi Lamont on Our Continuing Fascination with Pirates - J. Kenner Skip to content

What accounts for our fascination with pirates?

I’m talking about the 16th & 17th century variety. Is it the clothing? Knee boots and tight breeches and the white shirts with billowing sleeves. Or is the swagger of a man with a sword in his belt and an earring dangling from one ear? Or is the freedom of the open seas and not having to bow to any laws?

There are many myths and misconceptions about pirates, and one is that there were no rules. While it’s true that pirates were outlaws who flaunted the laws of many different nations, pirate culture had its own set of rules and a form of crude democracy. The pirate captain was elected by the crew and could be replaced at any time, except during battle. Ships sometimes drew up articles, a code of conduct by which the crew agreed to abide. The articles addressed things like how spoils were divided, compensation for injured men, and punishment for fractions of the rules.

Punishment was swift and harsh. Striking another crewman or lighting a pipe of candle in the hold might earn a pirate “Moses’s law”, 40 Stripes lacking one, or thirty-nine lashes of the whip. The worst punishments were reserved for desertion, theft and keeping secrets from the rest of the crew. These brought a sentence of death or marooning, which was a delayed death. Being marooned meant being left on a sandy island with a bit of food and water, and a loaded pistol so he could commit suicide. The islands were often little more than a sandbar at low tide. The marooning of Alexander Selkirk inspired Daniel Defoe to write Robinson Crusoe.

Captured prizes were divided among the members of the crew equally, except for the captain, and other designated crewmen, usually including the quartermaster, the sailing master, the boatswain and gunner.

Here are the articles used by the pirate captain John Phillips and his crew from 1724:

#2. If any Man shall offer to run away, or keep any Secret from the Company, he shall be marroon’d with one Bottle of Powder, one Bottle of Water, one small Arm, and Shot.

#3. If any Man shall steal any Thing in the Company, or game, to the Value of a Piece of Eight, he shall be Marroon’d or Shot.

#4. If at any Time we should meet another Marrooner (that is, Pyrate,) that Man shall sign

his Articles without the consent of our Company, shall suffer such Punishment as the Captain and Company shall think fit.

#5. That Man that shall strike another while these Articles are in force, shall receive Moses’s Law (that is 40 Stripes lacking one) on the bare Back.

#6. That Man that shall snap his Arms, or smoak Tobacco in the Hold, without a cap to his Pipe, or carry a Candle lighted without a Lanthorn, shall suffer the same Punishment as in the former Article.

#7. That Man that shall not keep his Arms clean, fit for an Engagement, or neglect his Business, shall be cut off from his Share, and suffer such other Punishment as the Captain and the Company shall think fit.

#9. If at any time you meet with a prudent Woman, that Man that offers to meddle with her, without her Consent, shall suffer present Death.

Many of these pirate rules played a part in the plot of my steamy pirate romance, Marooned, and were loads of fun to research. You can read more here.

My thanks to Julie Kenner for hosting me today. So, what do you think accounts for the fascination with pirates of the old-fashioned, swashbuckling variety?

Heather Parnell is traveling from England to her home in Jamaica with her new husband, 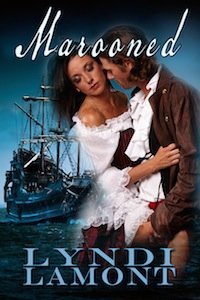 Roger, a man she detests. She performs a banishing spell with unintended consequences. When their ship is attacked by pirates, Roger is killed. Heather, disguised as a boy, joins the pirate crew.

Pirate captain Adam Langworth suspects there is something odd about the new lad. When he discovers she is a woman, she begs him to keep her secret, a violation of the ships’ articles. When her identity is discovered, Adam and Heather find themselves marooned on a deserted island with nothing to do for the rest of their lives but make love.

Disclaimer: This is a 12,000 word steamy romantic short story, not a full-length novel. Previously published by Amber Quill Press. Contains a sexy pirate, a naughty witch, cussing and fornicating.

Get Marooned at Amazon, iTunes, Kobo, Nook, and Smashwords!

Lyndi Lamont is the racy alter ego of romance author Linda McLaughlin. Writing sexy stories gives her a license to be naughty, at least between the pages of her books! She has written several full-length novels plus numerous short stories and novellas, ranging from historical to futuristic. She believes that love is unending and universal, and enjoys transporting her readers into a different world where her characters learn that, in the journey of life, love is the sweetest reward.

Thanks to Lyndi Lamont for guest blogging today! Don’t forget Lyndi’s question: why are we so fascinated with the swashbuckling pirate? Give your opinion below!

Julie, thanks so much for letting me visit today.

Wonderful having you here!!