Sylvia McDaniel on Why Love Isn’t Only For The Young (plus a giveaway!) - J. Kenner Skip to content

Home » Blog » Please Welcome: J.K.'s Guests » Sylvia McDaniel on Why Love Isn’t Only For The Young (plus a giveaway!)

I’m in the final editing stages of my new Christmas novella. This one is a little different. I

went back to my best-selling western series, The Burnett Brides that I had written years ago. The series set in the old west is about a mother who has three very stubborn sons who refuse to consider marriage. Eugenia wants grandchildren, and her sons aren’t interested in settling down. So she pulls some tricks and by the time the third son is married, the children decide to return the favor of finding their mother true love. I never wrote that book until now.

Eugenia Burnett (be careful what names you choose in books because they stay around a long time) has sworn never to remarry. She doesn’t need a husband or want one. She’s a free spirit doing what she pleases and no one is going to boss her around. Yet she’s not given up her matchmaking ways either. Now she’s moved onto the people she knows, and she’s putting widows and widowers together. Until one widower, Wyatt Jones (think John Wayne meets Maureen O’Hara) lets her know in front of a crowded restaurant that he’s not interested in any of the women she keeps sending him except her. He wants to marry her and she says no.

As a writer, I get tired of writing virgins and women sneaking around to have sex. There’s nothing wrong with writing young heroines, but I want to explore other times in life. We’re not young forever and what happens when people find love at a different age. As a reader I long for older heroines who find love a second time. We don’t stop having sex at thirty-nine.

Our population is aging. The baby boomers are retiring more and more each year. Don’t you think they’ll want to read older heroines? No, they probably can’t be kick-ass, though that would be a fun challenge to write, but why can’t they fall in love again? Middle-aged heroines who give love a second chance.

So this year, I’m putting out a Christmas novella that has Eugenia’s story. I’m hoping that 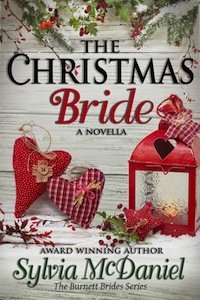 enough baby boomers will enjoy reading her story and ask for more older heroines who find love.  I’m also hoping that readers who loved this series, will enjoy seeing Eugenia find love and her sons get their revenge. The title is The Christmas Bride.

Would you read a book about a middle-aged heroine finding love again? I hope so. Leave a comment and a chance for a free copy of The Christmas Bride released November 5.

Thank you Sylvia for guest blogging today! And don’t forget to leave a comment!

Congrats, Sylvia! I’m always happy when I see an older heroine celebrated because the heroine of my book is unapologetically 54. I had soooo much fun writing her story. Like Eugenia (love the name), Judy Banger (I do get what you mean about being careful picking characters’ names) isn’t looking for a HEA (which made giving her one all the sweeter).
I look forward to reading this book, Sylvia. The cover is so charming!

I too like reading books that have a more mature heroine since I fall in that category.

Thanks for being on the blog!!!