Up to the Bedroom Door: Richard Preston on Sex in YA/NA (and a free book giveaway!) - J. Kenner Skip to content

Home » Blog » Please Welcome: J.K.'s Guests » Up to the Bedroom Door: Richard Preston on Sex in YA/NA (and a free book giveaway!)

Sex as a HOT topic?  Always. Sex as a topic in YA and NA?  A controversial topic, perhaps, especially in the YA realm.  My steampunk adventure series, The Chronicles of the Pneumatic Zeppelin, is a fun, swashbuckling, old Saturday-afternoon-matinee kind of story and is handled as Young Adult (YA)/New Adult (NA) crossover by my agent and publisher (47North).  The main characters are all mature new adults in the age ranges of 18-22 and they live in post-apocalyptic throwback kind of world similar in social structure to a frontier colony of the Victorian period. These characters, both male and female, grew up fast in a dangerous environment and they also possess the typical raging hormones of their age group.  And while this potentially-sex-laden situation is fine to exploit in New Adult (where the series is most at home) it must be carefully navigated (and essentially skirted) if you want the book to be acceptable in the Young Adult category. 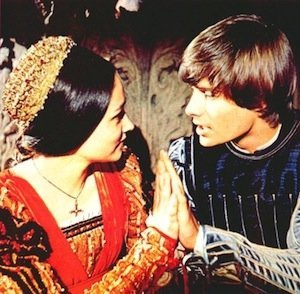 Note: when I asked my writers’ group what their sense of YA and NA age groups were it fired up a lively and fun little debate and discussion.  Generally speaking, it looks like the book marketing industry sees YA as 13-18 and NA as 18-25 (but mostly 18-22) (thanks to author Michael R. Underwood for that info, and thanks to everyone who chimed in!)

I’d like to discuss how I chose to handle the subject of sex in my series, focusing on the new book, Romulus Buckle & the Engines of War.  I have no desire to be controversial, nor expose young readers to unnecessary adult content, and I have to walk a fine line between those concerns and telling a story about young adults who are sexually active.  From the beginning, my three main characters, Captain Romulus Buckle, Sabrina and Max (a female half-alien) are involved in a just-emerging love triangle which none of them cares to admit might exist. Feelings are unrealized or suppressed.  The three characters are orphans adopted by the same parents and they are members of the same crew. One can see how they might not wish to pursue any romantic urges toward each other.

My general commonsense rules for Young Adult/New Adult Crossover are:

1)    You can suggest that sex is going to happen but you can’t show the sex.

3)    Description of the physical body is okay as long as it’s not presented sexually. 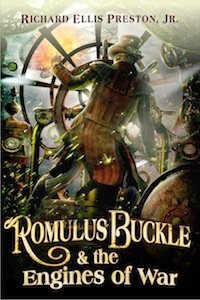 Romulus Buckle, the handsome, dashing commander, is what I call “an unintentional rake.”  Women come to him easily and he gives it little thought.  His airship is more important to him than any flesh-and-blood female.  Currently he is involved in a casual affair with a pretty female crew member named Ilsa Gallagher; it works because she fully understands the nature of their relationship.  The excerpt below gives you a sense of how close (other than perhaps a few make-out moments) I ever think I might get to a sex scene in the series.

Ilsa stepped into the cabin. She wore her dense but tight-fitting leather skinner’s jacket, resplendent with hooks, pockets, and strappings, her hair loose about her shoulders. The skin on her face was flushed, her eyelids heavy, her lips slightly parted, and she eyed him with the soft certainty of a hawk.

“You have the cordage numbers, I see,” Buckle said. He suspected what was coming and, though he was exhausted, he was of no mind to prevent it. Ilsa occupied a soft spot in Buckle’s heart; she was a good salt, an excellent rigger, tough, pleasant, fearless, extra pretty because she did not fuss about her appearance, and she had shared his bed with him occasionally over the stretch of the previous year. Theirs was a friendly, playful association, but not a romantic one: after their first night together, Ilsa had gently informed him that she could never love an airship captain, and Buckle had easily accepted her caveat, loose and unencumbering as it was.

Ilsa stepped closer, tossing the papers on the rum-splotched table and grabbing the bottle to take a long swig.

Ilsa kicked the hatch shut with a backward thrust of her boot. “The ratlines are fine, Captain,” she whispered, snapping open a button at the throat of her collar, exposing a tiny patch of pale-white skin. “But I need tending to.”

My characters live in the rough and tumble world of what is essentially a pirate-style airship and the females, though they wear some clothing which is distinctly feminine, do not wear makeup or jewelry and, like the males, tend not to fuss about their appearance.  These females inhabit what are traditionally male roles in what is traditionally considered a male-dominated Victorian-era-type world.  Since this is also the future, the women here are equals and they often assume positions of command.  But they are also young women who, when given the opportunity to dress up for a party and impress the boy they like, will do their best to look attractive.  I might add that, in the same situation, the boys make equal efforts to look good for the girls.

Sabrina looked at herself in the mirror of her room, half-dressed for the ball as she was, and not with an uncritical eye—with her best friend Holly Churchill at her side and being so encouraging, it was difficult to get a good read on her ensemble. As a woman in a rough profession, Sabrina rarely had time to preen. Yes, she was adamant about the feminine character of her aviator clothes she loved, with the soft leathers, cuffs and fleur-de-lis, but she was normally unmindful of her looks, pulling her hair up tightly under her bowler with pins, and applying no cosmetics beyond splashing her freckled face with cold water. She did comb her hair before turning in after her watch on the Pneumatic Zeppelin, yes, but she usually did that by feel, often in near darkness, and rarely looked into the small cabin mirror over her washbasin.

Still, her face in general pleased her, though she did not care for how suddenly her lips thinned out at the edges, making her mouth too serious. Of course, she had a love-hate relationship with the freckles on her nose and under her eyes, for though she considered them blemishes they always seemed to be one of the characteristics that men loved about her appearance. She also thought that her elfish ears were awkwardly small, insufficient to hold back the locks tucked behind them.

Sabrina peered harder at her reflection, backlit by the warm, dying light of the day pouring in through the window. She knew she was looking at herself differently this evening, for she wanted to look as elegant as she could possibly manage. Holly, also partially dressed, exuberant under her usual seriousness, was helping with the complicated, frilly undergarments, garters, bustle, and gown. Holly was a milliner, a ladies’ hatmaker—she had handcrafted Sabrina’s beautiful derby for her—and she had a superb eye for the fashionable.

The human body, naked, is a place where I did have to make a decision.  Either I avoid nudity in the series or I treat the human form with objectivity whenever it appears partially unclothed, which so far has been once. I chose the latter option.  Below, as Romulus Buckle battles to save Max’s life after she is grievously wounded defending him, I present the body as it is exposed in an utterly non-sexual situation.  This is an important moment in the story for both characters because Max has always hidden her body from everyone.

Applying the knife to Max’s blouse, Buckle sliced it away, revealing the skin underneath: skin pale as cream where he wiped it, skin adorned with curving black stripes. Max’s entire left side was awash in thick blood that looked black in the firelight, down to where it had pooled over the belt at her waist. His heart sank, there was so much of it, steaming in places, dripping down the ribs. He pulled away the tattered remnants of the blouse, and she lay exposed from the waist up.

It would have surprised Buckle, if he had time to consider it, that Max’s well-muscled stomach was all white. Buckle had never seen Max’s body beyond her face, neck, and hands. She had always kept it hidden under sleeves and high collars. Hers was a beautiful form, very human in appearance except for the black stripes upon it, tapering off along her ribcage and swirling around her small, pink-nippled breasts. Buckle was in no state of mind to register such things. Even though his invasion of her well-guarded privacy was necessary to save her life—he was her doctor now, after all—if anything, he experienced a sense of impropriety as he worked. And there arose another emotion, guilt, a despair at the violence of the wounds she had suffered in his defense, but he was too absorbed in his task to give such feelings any attention.

And so, here are examples of the sexuality-line I have walked in my foray into the YA/NA crossover world where I have attempted to tailor things to work for both age groups.  I think that my “up to the bedroom door” method (an old saying applied to the treatment of sex in early television soap operas) works reasonably well.  Actual sex is suggested through hints and innuendo and only rarely. Traditional and non-traditional sexual roles in society can be tackled and I enjoy writing strong female characters who can dish it out and take it just as well as the boys but who also retain a confident sense of their own sexual identity.  My women are not girly nor tomboyish: they are women, but that doesn’t mean they can’t have moments of being girly and moments of being tomboyish.  And, in non-sexual situations, I think a modest but direct presentation of the human (or human-like alien) body (torso nudity, essentially) is okay as long as it is essential to the story.

That’s my take on that hot tamale, anyway. 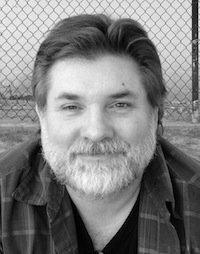 Richard Ellis Preston, Jr. is a science fiction writer who loves the zeitgeist of steampunk. Although he grew up in both the United States and Canada he prefers to think of himself as British. He attended the University of Waterloo in Ontario, Canada, where he earned an Honors B.A. in English with a Minor in Anthropology.  He has lived on Prince Edward Island, excavated a 400 year old Huron Indian skeleton and attended a sperm whale autopsy. Romulus Buckle and the Engines of War is the second installment in his new steampunk series, The Chronicles of the Pneumatic Zeppelin. Richard has also written for film and television. He currently resides in California.

Thank you so much Richard for guest blogging!

Don’t forget – one lucky person will get a free copy of Romulus Buckle & the Engines of War, so let us know what you think of sex in YA/NA fiction!
a Rafflecopter giveaway