From screenplay to novel: Aaron de Orive on the creation of Bladesinger. - J. Kenner Skip to content

I want to talk about three of my favorite works of fiction.

The first one is my favorite children’s book, The Wizard of Oz. Now like most kids, I saw the movie with Judy Garland before I read the book. It’s one of my favorite

films as well. In fact, one of my earliest childhood memories is of me cowering in my grandmother’s lap watching the Wicked Witch of the West command her flying monkey into the air. It scared the bejesus out of me. Probably out of a lot of kids. In elementary school, I discovered the movie had been based on a series of books by L. Frank Baum. I read every one I could find in our school library. I love Oz.

The second is The Three Musketeers. Once again, my first exposure to this story was as a movie, the 1973 version with Michael York. The cast in that movie is amazing. Oliver Reed as Athos? Christopher Lee as Rochefort? Faye Dunaway as Milady? Wow! I’ve seen that movie so many times that I’ve memorized every line of dialogue. It instilled in me a love of all things swashbuckling. I was in high school when I finally got around to reading Alexandre Dumas’ amazing novel. To say that most film adaptations have only scratched the surface of that story is an understatement. It’s a must read.

And finally, there’s Oliver Twist. True to my pattern, my first experience with this classic was the 1968 musical Oliver. Now oddly enough, I’m not a fan of musicals at all. But there was something about that particular one that I found incredibly compelling. It was the characters and the story, of course. I didn’t get around to reading Charles Dickens’ novel until I was in college. What an amazing work of literature. It’s one of my favorites and, in my opinion, Dickens’ best novel.

Given that information, it’s not surprising that the first incarnation of my novel Blade Singer was as a screenplay. My background is in film production and screenwriting, which I studied at the University of Texas at Austin. (Julie and I share an alma mater.)

(The craft of screenwriting, btw, is invaluable to storytellers. If you’re a novelist who’s never written a screenplay, I can’t recommend it enough. It’s ideal for helping you think in terms of scenes and beats, for understanding the spine of a story and the flow of a narrative, and for achieving the maximum amount of drama with the fewest words possible.)

So anyway, I wrote Blade Singer after graduating from U.T. It got me my first Hollywood manager and my first professional writing gig in the video game industry. When I decided to try my hand at writing novels, I knew that would be the story I would tell. I was incredibly fortunate that one of my friends and favorite authors, Martha Wells, not only encouraged me in this endeavor, she also agreed to help me undertake the task. I couldn’t have asked for a better mentor or collaborator. Martha is amazing and I love her oodles.

When the novel was finished, I was very proud of what we had created and was determined to share it with an audience exactly as envisioned. In this case, that meant self-publishing. And so we decided to Kickstart the novel, to cover the many costs that would insure a professional level of quality.

Blade Singer is a middle-grade fantasy novel that features a young protagonist transplanted to a strange magical world filled with swashbuckling faeries, legendary monsters, a band of sinister thieves, and, of course, a terrifying wicked witch. It’s thrilling, suspenseful, scary, action-packed, and a whole lot of fun. I’m confident that 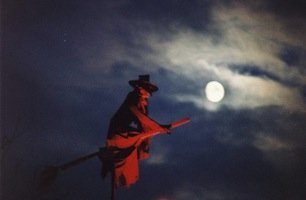 if you check it out for yourselves, you’ll agree.

Aaron de Orive is a fantasist (he loves that word) who has helped create tabletop role-playing games and popular video games. He enjoys writing screenplays and fantasy novels with a variety of amazing collaborators. He lives in Austin with his wife, daughter, and two very spoiled dogs.

Thank you so much, Aaron!

Aaron listed his three favorite works of fiction. What are yours! Let us know in the comments section!

Thrilled to have you here!!!!

And I’m thrilled to be here! Now where’s the bar?