I love businesses that obviously love their customers, and I’m thrilled to say that I discovered one just like that recently in Wallums – a company that makes these awesome vinyl stickers that go on your walls.

I went a little crazy buying some recently, including one for my office.  It’s one of my absolute favorite poems by Shel Silverstein.  I don’t know the title, but I think it’s “If you are a dreamer,” and of the lines includes the phrase “flax golden tales to spin.”

It arrived and I hung it on the bright yellow wall of my office just opposite the doors so that everyone who comes in can see it.  And they did.  Including the twelve year old friend of one of my daughters about two weeks ago (after it had been hanging there for months and months).

Only this time, she saw that it didn’t say “flax golden,” but instead said “flax  olden.”

I guess that could make sense.

Except it really doesn’t.  And it also left a gap between flax and olden.  And besides, I really wanted my missing “g,” which, I think, fell behind a bookshelf and got vacuumed when I did some rearranging. 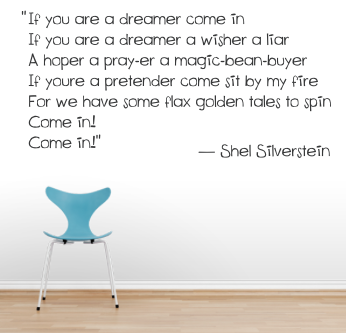 So I contacted the company.  “Can I buy the missing G,” I asked.  And low and behold, they sent it to me for free!  And speedily, too.  (They actually sent me “golden” so I now have an O, L, D, E and an N in reserve for those alphabetical emergencies.

So thank you to Wallums!  I appreciate the awesome customer service!