Think those are just random words I used to lure you in?  Wrong!  I’m going to discuss all of them.  And they will all be relevant (I hope).

Let’s start with the gratuitous sex bit.  Now J. Kenner fans, don’t get me wrong – I’m an avid romance reader as well as writer. I like hot sex as much as the next person.  There’s nothing I like better in a good read, especially a romance, than a steamy sexy scene.

Infamous was, I thought, a rather sweet romance.  Very family oriented. With, you know, a few steamy sex scenes.  Just the right amount of sex (so I thought) to express the relationship that existed between my characters, Morgan and Jessica. 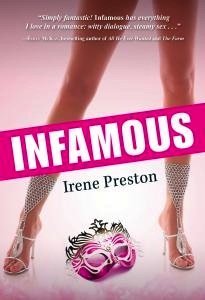 Imagine my surprise when I found out Infamous had been picked up for Crimson Romance’s “spicy” line.  Spicy!  Wow.  Now, I should tell you, I didn’t really have a problem with this.  I did write the steamy sex, after all.  I read widely – including that new-fangled erotica on occasion.  I don’t have a problem with sex scenes or erotica.  But there is one thing I do have a problem with.

I’ll give you the scenario:

I’ve downloaded Hot New Romance Novel by Bestselling Author to my kindle.  I’m enjoying it quite well when I get to this part (situation wildly altered to protect the guilty):

The protags, two physicists, are walking up a hill one afternoon discussing string theory as it relates to quantum entanglement and arguing over whether they should even take a second glance at loop quantum gravity.  This is a Big Deal in the plot because their research grant is at stake.  It’s an animated discussion.  Then. Suddenly.  They are having sex. Tab A goes into Slot B and. . . . .WHOA!  Okay, back up.  I was skimming a bit, because the math behind string theory is a bit over my head, so I obviously missed something.  Except I didn’t.  There’s no emotional lead-in to explain why these two people are suddenly having monkey sex.  None.  Then they get done and continue with the physics discussion.

Okay, that was the quantum entanglement bit.  I’ll admit I cheated a little.  It might not have been completely relevant.

Why did all this become relevant to my “sweet” romance (with the steamy sex scenes)?

Well, apparently “sweet-with-steamy” wasn’t quite “spicy”.  My editor asked me to add two sex scenes to maintain a heat level appropriate to the line.  I agree (hey, I want the sale) and I am (I tell myself) a professional.

I sit down to make revisions, and the first scene goes off without  a hitch.  It’s actually just an expansion of a scene that was already in the book.  I have the sneaking suspicion that I was just lazy to not write it in the first place.  Onward to Scene Two.

And here’s where Artistic Integrity rears it’s head (who knew I had such a thing).  I don’t want to write scene two.  You see, I’ve made a big deal in the place where Scene Two is supposed to go about Jessica and Morgan not having sex.  It is toward the end of the book and they are not in a good place.  The are barely speaking.  They are not having sex.

But I’m a professional. Right.

I spend several days kicking around different ideas for Scene Two (which I now refer to in my head as “Gratuitous Sex Scene”).  I begin to have empathy for Bestselling Author and her physicists.  I complain to my husband (the non-romance writer)  who is spectacularly unsympathetic. “I don’t see the problem,” he says. “We have fights.  Sometimes we have sex in the middle. It a happens.”  Except in writing romance.   In romance, sex means something.  Otherwise, it is the romance equivalent of Chekhov’s gun never being fired.

Jack’s White’s “Love Interruption” more specifically (although, yes, I was already crushing on Jack before that).  Here are the lyrics that did it for me:

To roll me over slowly

stick a knife inside me,

and twist it all around.

Holy cow! That’s devastating. That’s beautiful.  And. . . it hit me. . . that’s what Jessica and Morgan needed if Gratuitous Sex Scene was going to work.

In the end, I think (I hope) it made the story stronger.

So here are my questions for you – when is the sex gratuitous?  Always? Never? Some gray area in between?  Have you experienced the Quantum Entanglement situation in a novel you’ve read?

If you’ve been kind enough to read Infamous, I’d love your feedback on how I handled the love scenes between Jessica and Morgan.

You can read the first chapter free on IrenePreston.com or grab the whole e-book on Amazon for only $1.99 during February.  I warn you, there may be gratuitous sex.  You can come back here and flame me if I broke my own rules!

Irene Preston has to write romances-after all, she’s living one! As a starving college student, she met her dream man who whisked her away on a romantic honeymoon across Europe. Today they live in the beautiful hill country outside of Austin, Texas where Dream Man is still working hard to make sure she never has to take off her rose-colored glasses.

Get Infamous at Amazon, Barnes & Noble, iTunes, and KOBO!

And don’t forget to visit the Jack White webpage!

A big thanks to Irene for blogging with us today!

Don’t forget Irene’s questions: “When is the sex gratuitous?  Always? Never? Some gray area in between?  Have you experienced the Quantum Entanglement situation in a novel you’ve read?” Let us know what you think in the comments!

Thanks so much for having me here today, Julie! Anybody else a Jack White fan {drools}?

Hi Irene,
I always felt cheated when I’d be rolling along in scene knee-deep in fear because a serial killer was hot on the heels of some poor character when, wham! Hot sex! I mean really??? When I’m fearful for my life or that of a loved one, I’m definitely not thinking ‘do me.’ I just want to survive.
But now that I’ve written my own stories, I see where some editors feel the need for gratuitous might be called for. And usually a mistake if I have to go back and re-read to find what it was that was such a turn on.
Great post!

Oh Teresa – I *know* – I’m pretty sure my flight instinct is going to overrule my libido. Hot Sex at the safe house – you bet! Hot sex while wondering if the bad guy is going to pop out from behind a tree and whack me? Maybe not- lol!

Thanks so much for coming by today, Irene!!! It’s fab to have you here!

Great post Irene. I did read Infamous and loved all of it including your sex scenes. I thought none of them were gratuitous. I get annoyed by gratuitous sex scenes. When I feel no heat and no reason for the scene with a good lead in I tend to skim over the sex scenes in a book. That’s how I can tell if they were gratuitous or not. The skim factor.

Awww. Thanks, K.M. Everyone, K.M. is the author of BOUNCE – one of my favorite recent reads. I’m just thrilled that she’s taken the time to read my book!

Love your post, Irene! It’s interesting to read about your process. I’m of the mind that unsupported sex, gratuitous sex scenes, feel flat and can take me out of the story. I also think it’s so nice when an editor makes a suggestion and it turns out it strengthens the book.

I agree about the editing. This actually turned out to be one of my favorite scenes and one I’ve gotten several comments from readers on. Yay for editors!

I read Infamous and loved it! Nothing about it felt forced or gratuitous, so breathe easy. 🙂 I have run across sex scenes in books that were clearly added just because someone somewhere felt too many pages had gone by without the characters getting nekkid. I think it’s that slow, delicious build up that makes a sex scene effective. And “suddenly a look of heat passed between them” isn’t build up. Sometimes when the characters don’t have sex is almost as hot as when they do, you know?

Oh, and Jack White? I have drooled over loved him for years. He’s just so beautifully different. 🙂

“Beautifully different” – I like that. I totally go for those artsy types. Jack can interrupt me anytime!

Great post, Irene. For me, sex is gratuitous if there’s no reason for it other than titillation, no emotion involved, no furtherance of the plot. I can understand the adrenaline factor involved, but usually they pull me right out of the story.

You’re right. I have to be right up in their heads. I’m an emo junkie!

Even though I love Nora, I have a hard time with her JD Robb line, mostly because I can’t believe the h/h take time out for sex when they have only 12 hours before a woman is tortured to death. I’m not buying it.

Thanks to everyone for hanging out with me today and indulging my little ramble. And, of course, thanks so much to Julie for hosting us. I had a great time!

So glad to hear it!

Enjoyed the post, Irene. A colleague of mine who used to read a great deal told me not long ago that she’d pretty much quit reading because there was no emotion in most of the books she read that had explicit sex scenes–said she didn’t mind the sex, but wanted other parts of the story to be the main emphasis. I know it depends on each reader, but if sex seems to be there merely to fill
x number of pages, I find it gratuitous-=-and I think maybe a lot of readers are doing what I do sometimes, and just skipping the pages they didn’t think needed to be there.

It sounds like you and K.M. agree on the “skim factor.” I think it’s a pretty good measuring stick of how engaged you are with the characters at that moment. When I read, my favorite love scenes keep me really connected on more than a physical level no matter what the overall heat level of the book is.

Just a reminder to everyone, if you want to check out some really searing sexual tension hand-in-hand with compelling characters, check the Stark Trilogy (yes, written by our amazing hostess). No skimming bits – I guarantee it!!!

I’m afraid gratuitous sex in a book makes me close the book or, click the off button. I have read a number of books which have no real story but are just vessels for lots of slippery, slappy sex scenes :-). However, quantum entanglement is a whole new position!!

Dottie & Joanna – thanks so much for stopping by!