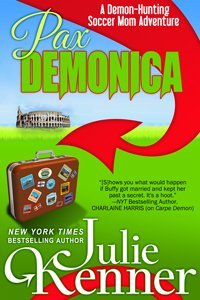 I’m super-psyched that we’re counting down the the release in just a few weeks of PAX DEMONICA, the next book in my Demon Hunting Soccer Mom series!

Here’s a sneak peek at some action for you: 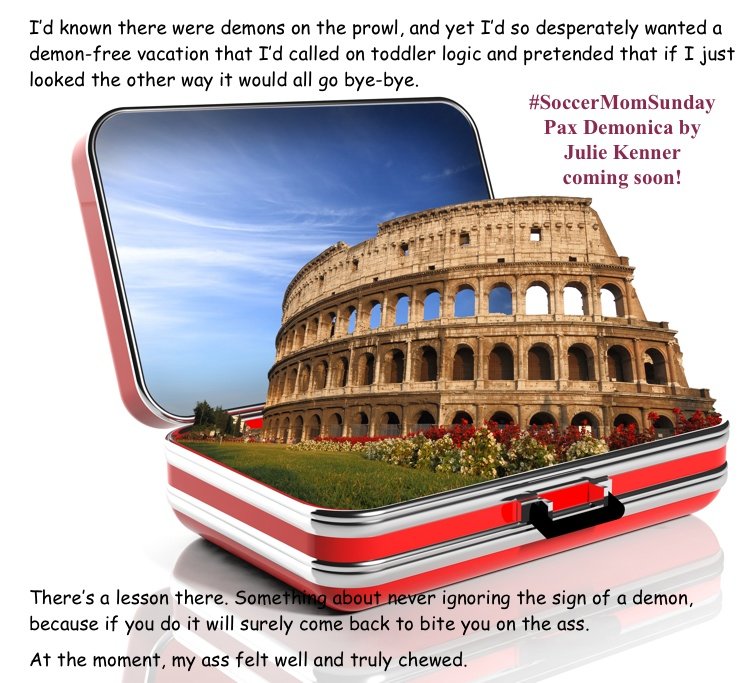 Dammit, dammit, dammit! I’d known there were demons on the prowl, and yet I’d so desperately wanted a demon-free vacation that I’d called on toddler logic and pretended that if I just looked the other way it would all go bye-bye. There’s a lesson there. Something about never ignoring the sign of a demon, because if you do it will surely come back to bite you on the ass.

At the moment, my ass felt well and truly chewed.

I used my free hand to slam my fist soundly into his nose. “What?” I repeated. “What do you think I have?”

“You know,” he snarled, and then he hocked back and spat on me. So help me, I flinched. Me, the woman who’s changed countless dirty diapers and nursed children through all forms of stomach flu. I faltered in the face of phlegm. And the demon took advantage of my weakness, wrenching his body to the side and forcing himself out of my grasp.

“Oh no you don’t,” I said, grappling for him, but he was small and wiry and fast. He scuttled backward like a crab, then hopped to his feet.

And then the little fiend turned and ran down the alley away from me. I started after him, but was halted by the sound of pounding feet behind me, coupled with Stuart’s worried voice, now echoing down the alley. “Kate?  Oh, shit, Kate!  What happened!”

He was at my side in seconds, holding my arm to steady me, then bending down to pick up Allie’s backpack, which the little demon had dropped. At least I’d managed to accomplish that much.

“Jesus, Kate. You should have just let him take it. What if he’d had a knife?”

“Force of habit,” I said dryly. I rubbed the sore spot on my head as we walked back to the front of the B&B. “And all he had was a fist.”

“So it wasn’t a—a demon?” His voice dropped so far it was barely audible.

I shook my head, the lie coming too easily. “A kid,” I said. I told myself it was just jet-lag and hunger. I’d tell him the truth later, after we all were rested. But honestly?  I think I was lying to myself, too.

PAX DEMONICA is my first indie “front list” title (as in, it’s an entirely new book, not backlist) that I’m releasing entirely on my own.  (Tame Me is an indie book, but it’s being released in conjunction with a marketing company, and that’s why I’ve been able to get pre-order links to fans!).  Because PAX is completely indie, I don’t have pre-order links, but it will be available at Amazon (in print and as an ebook) and also for Nook, iBooks, and Kobo!  Stay tuned!

And be sure to sign up for my newsletter so you don’t miss the release date.

If you haven’t read the series yet, you can download Carpe Demon for free (woot!) and then dive into the rest of the series.  You can learn all about it at my Demon Hunting Soccer Mom page!

I love these books. They have been my friends sometimes my only friends in very dark and troubling times. Kate, like Buffy has been a moral guide for me. It was like I was in a dark, horrible place and there was a light to guide me out. Stoker wrote that his heroes had to “pass through the bitter water before we reach the sweet”. Well these books have been like a life preserver for me. There were times I felt like giving up and I’d think about coming home and reading them. Kate and Ms. Kenner are two of my heroes. I love them both.