I hope you all have enjoyed Raising Hell and Hell Fire, books 1 and 2 in the Devil May Care series by Julie Kenner and Dee Davis!

Monday is the release of the next story in the series: Sure as Hell by Julie Kenner, featuring Lucia, the devil’s oldest daughter, a kick ass assassin who I just love! 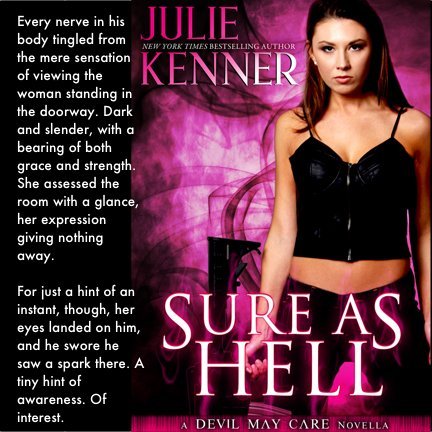 They were the baddest of the bad, the illegitimate sons and daughters of  Satan, who had managed to make love, raise hell, and milk life in a manner worthy of their heritage. Until the day the devil himself needs to name his heir apparent.  So who will the next ruler of Sin City be?

As the eldest child of Satan, Lucia is used to being Daddy’s princess. And she’s played that role faithfully throughout the years, being the only one of the devil’s children who has worked full-time in the family’s devilish business.  As an assassin, Lucia is top-notch, but lately she’s been faltering, and when her father comes to her with a proposition—pull off one last job and move up the corporate ladder to take over all of Hell … well, that’s an offer that Lucia can’t refuse.  More than that, how can she fail? Because even despite her declining enthusiasm, Lucia is the best of the best.

But when Lucia meets Dante Moreau, the deliciously sexy son of her intended target, things get a bit more complicated. Now Lucia has to decide between dancing with the devil … or following her heart.