What if Harry Potter had been a Girl? A guest post from Aaron de Orive, co-author of Blade Singer - J. Kenner Skip to content

Home » Blog » Julie/JK's Books » What if Harry Potter had been a Girl? A guest post from Aaron de Orive, co-author of Blade Singer

To get all officially, here are their bios:

Aaron de Orive was a writer on Metroid Prime 3: Corruption, Star Wars Galaxies: An Empire Divided, Tabula Rasa, Anarchy Online, and Star Wars: The Old Republic. He is also the creator and author of the fantasy role-playing game SHARD: World of the False Dawn. Blade Singer is his first novel. Aaron lives in Texas with his wife, daughter, and two very spoiled terriers.

Martha Wells is the author of a number of fantasy novels, including The Cloud Roads, The Siren Depths, The Wizard Hunters, Wheel of the Infinite, and the Nebula-nominated The Death of the Necromancer. Her YA fantasy, Emilie and the Hollow World, was published by Angry Robot/Strange Chemistry in April 2013, and the sequel, Emilie and the Sky World, was released in March 2014. Two collections of Books of the Raksura novellas will be published in September 2014 and Fall 2015. She has had short stories in Black Gate, Realms of Fantasy, Stargate Magazine, and Lightspeed Magazine, and in the anthologies Elemental, The Year’s Best Fantasy #7, Tales of the Emerald Serpent and The Other Half of the Sky.  She has essays in the nonfiction anthologies Farscape Forever, Mapping the World of Harry Potter, and Chicks Unravel Time. She has also written media-tie-in novels, Stargate Atlantis: Reliquary and Stargate Atlantis: Entanglement, and a Star Wars novel, Empire and Rebellion: Razor’s Edge.

Here’s a bit about Blade Singer:

Sure, Manny Boreaux wanted to escape his real world problems. But being trapped in the body of a goblin pickpocket wasn’t what he had in mind. Still, it’s kind of cool to be able to move like a spider monkey and go invisible. Unless you happen to work for an evil witch and her vicious gang of cutthroats. If they find out who he really is, they’ll turn him into minced pies! Can Manny fool his fellow thieves long enough to find some allies? Can he thwart the witch’s scheme to assassinate a young king and ignite a terrible war? And will he ever find a way home?

And check this out!  An awesome endorsement from Terry Rossio, one of the co-writers of Pirates of the Caribbean and Shrek! 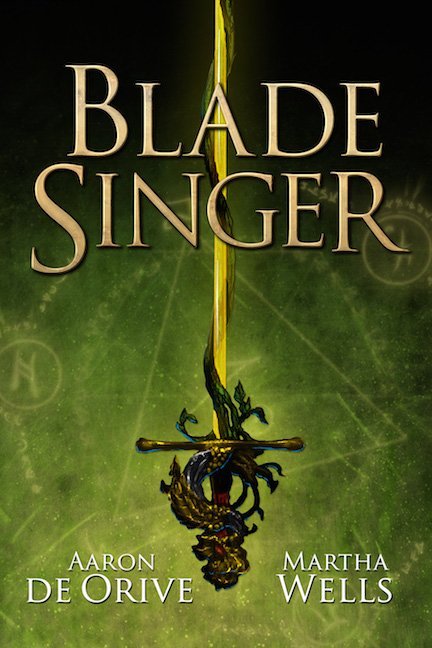 And without further ado …. here’s Aaron:

“Daddy, what if Harry Potter had been a girl? Would it have changed the story?”

My nine year-old daughter, Elena, asked me that the other night. And it was a great question. Would the events in the Harry Potter series have played out any differently if Harry Potter had been Harriet Potter? Clearly who Harriet would have been attracted to while at Hogwarts and who she would have ended up marrying would have been different. But would the major beats of the narrative have remained exactly the same?

That got me thinking about gender identity in other popular middle-grade fantasy series. What would happen in those stories if the gender of the protagonist was switched? If Dorothy in the Wizard of Oz series had been a young boy, would the story have changed? If Percy Jackson had been Persephone Jackson, would it have been a completely different story? More to the point, would it have needed to be a different story?

Now to be fair, I’m not really someone who believes there are no differences between the sexes. Aside from the obvious physical differences, there are many differences imposed on us by our society, culture, and religion. That’s just a fact. Now I’m not here to advocate or condemn any specific gender-based structure. I just don’t know enough about that sort of thing. I’ll leave that to the experts. But what I do know is my daughter.

I’m extremely fortunate to be a stay-at-home dad and writer. This has allowed me to spend a great deal of time interacting with Elena. (She’s an only child.) Never having raised a girl before, and lacking any sort of manual, I’ve simply shared my own interests with her over the years. She’s therefore grown up with an appreciation for superheroes, Norse myths, Japanese kaiju, the Universal monsters, Hammer horror films, Star Wars, and Musketeer movies. She also digs faeries, and muppets, and Disney princesses, but truth be told, so do I. Well, maybe not so much the princesses.

If you ever met my daughter, you’d encounter a wonderful, bright, and creative little girl. She’s not at all what you would call a tomboy. She loves frilly dresses and bright pastel colors and ponies. But she also loves all the things I do, things that would typically be associated with boys. And this has given me a realization. When it comes to realms of fantasy and the imagination, the differences between the sexes seem to blur. They take a backseat to the adventure, and the story takes front and center. I’m not saying gender roles are not important in fantasy fiction. I believe they most definitely are. But I’ve come to realize that they can be much more fluid, often as speculative as the fiction itself.

And I’ve come to understand that’s a wonderful thing.

Thanks for dropping in Aaron!!!!!

How about you all?  What do you think would have happened if Harry had been Harriet?