We have another sexy and hot excerpt from Ignited by J. Kenner Most Wanted book 3 as we continue the countdown to the September 9 release!!

Who is ready to meet the sexy and deliciously dark, COLE AUGUST?

Have you pre-ordered Cole’s story yet? 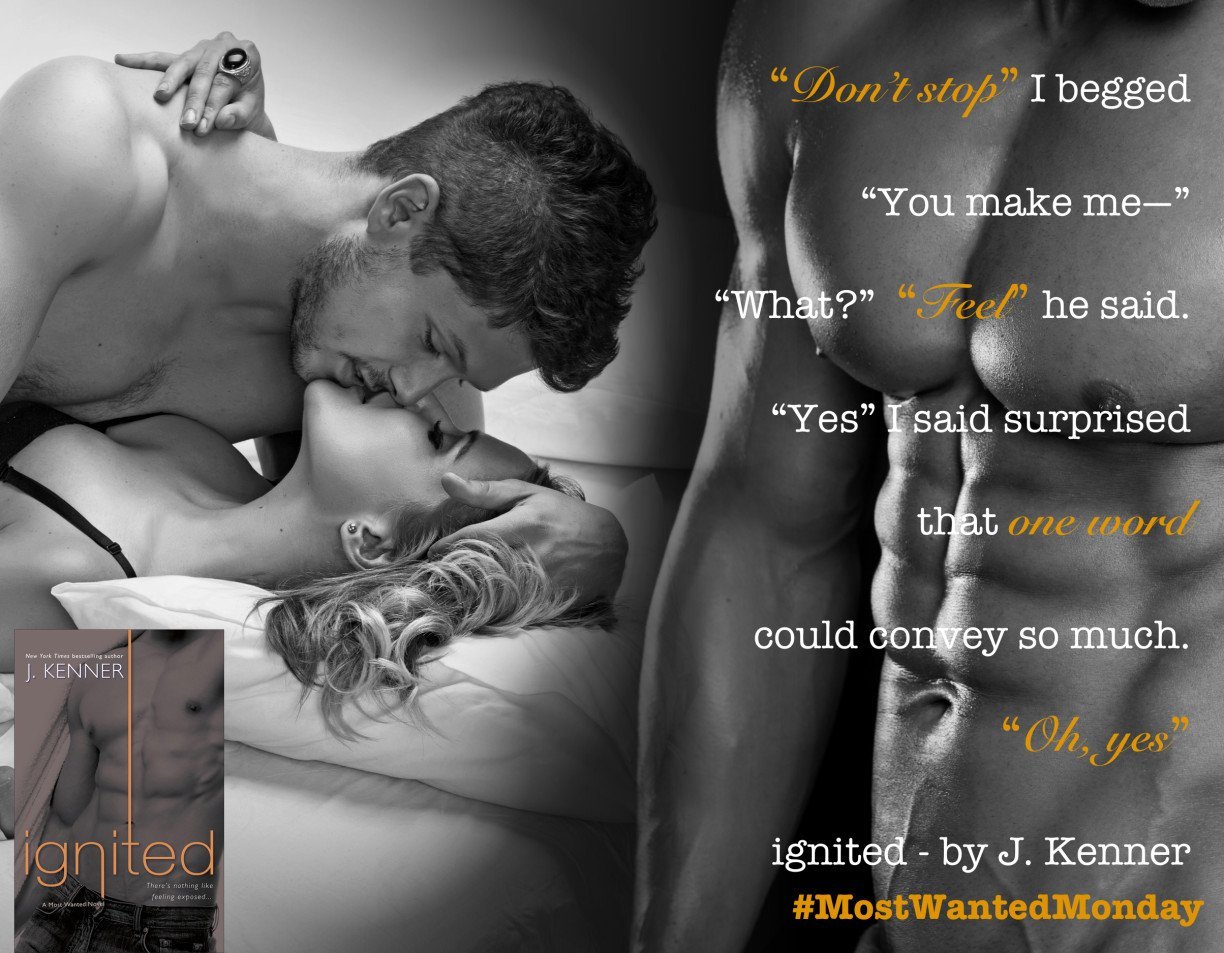 The gallery space had once been a warehouse, and he had me pressed against the original, exposed brick. I felt its rough texture grating against my shoulders and bare arms, and each sting of that contact seemed to heighten the thrill of Cole’s hands upon my body.

His fingers closed around the collar of my dress, and he yanked it down, ripping the material. I gasped, thrilled and delighted as he closed his hand tight over my breast, his fingers teasing my already tight, overly sensitive nipple.

With his other hand, he tugged my skirt up, and as his mouth closed over my breast, he shoved my panties aside, then moaned when he realized I was waxed.

“Christ, you feel good,” he said, as he thrust his fingers roughly inside me.

I was wet and open and ready—and my body clenched around him, wanting to draw him in, to be as close to him as humanly possible.

“Kat,” he murmured as he moved from my breast to my neck to my mouth. “Christ, the taste of you.”

“Don’t stop,” I begged, as his fingers thrust harder and harder inside me.

“Yes,” I said, surprised that one word could convey so much. “Oh, yes.”

His mouth closed over my breast again, and I writhed against the rough wall, each scrape of the rough brick against my skin like an underscore to our passion.

I wanted him inside me, and I silently begged for him to just take me, to fuck me, and not to ask or tell, but to just do. I wanted to be his—I wanted to simply belong.

There was a couch about three feet to my right, and he took my hand and drew me roughly toward it. His mouth covered mine, and as his tongue teased me, his fingers yanked my skirt up the rest of the way up to around my waist. Then he whipped me around, his palms on my ass as he bent me over to spread me, to take me, and I moaned aloud in sweet anticipation, because wasn’t this what I’d been wanting this entire night? Hell, this entire year?

I felt his fingers graze over the raw and sensitive skin on my shoulder. And I sucked in air, realizing for the first time how thoroughly the brick had abraded my skin.

“No,” I said, as something cracked inside me. It hurt, yes. But I liked it.

I didn’t know what that meant, but I knew that it was true. I liked the pain—not pain by itself, but pain that came from him. From our shared passion.

I wanted to explain that, to make him understand, but I couldn’t find the words.

“I hurt you,” he repeated, and this time I heard the low, agonized tone of self-loathing in his voice.

“You haven’t,” I whispered, rushing to reassure him and cursing myself for not finding the words sooner.

But he wasn’t listening, and I felt suddenly cold and exposed. I started to turn, to shift, to put my dress right. I couldn’t, though. He had one hand on my waist and the other on my shoulder.

The one on my waist kept steady pressure, keeping me bent forward and helpless.

The hand on my shoulder grazed lightly over my newly raw skin. Skin that only moments before had burned with a pain that punctuated pleasure, but that now just stung, almost shamefully.

“Christ,” he said, and this time his voice was so low that I almost couldn’t make out the word.

He held out his hand, and I saw that his fingertips were streaked with my blood. “I did that to you.”

“What?” The word was harsh. “What do you want, Kat? What could you possibly want from me?” He held out his hand again. “Pain? Blood?”

“Maybe.” I lifted my chin and met his eyes. “You said I owed you. Well, I’m willing to give whatever payment you want.”

“You have no idea want what I want or what you’re saying.”

“The hell I don’t,” I countered. “Don’t you get it, Cole? I want you. Whatever or however that means, I want you.”

Something flickered in his eyes, something that looked a bit like hope. But it was gone before I could be certain.

He took a step backward, and I had never seen him look more sad. “I may not have a lot of self-restraint. But I have enough. And I’m not taking you down with me.”