7 days till Ignited by J. Kenner – Most Wanted Book 3 is available!!

What are your thoughts of Cole August so far?? Come back tomorrow for another excerpt. 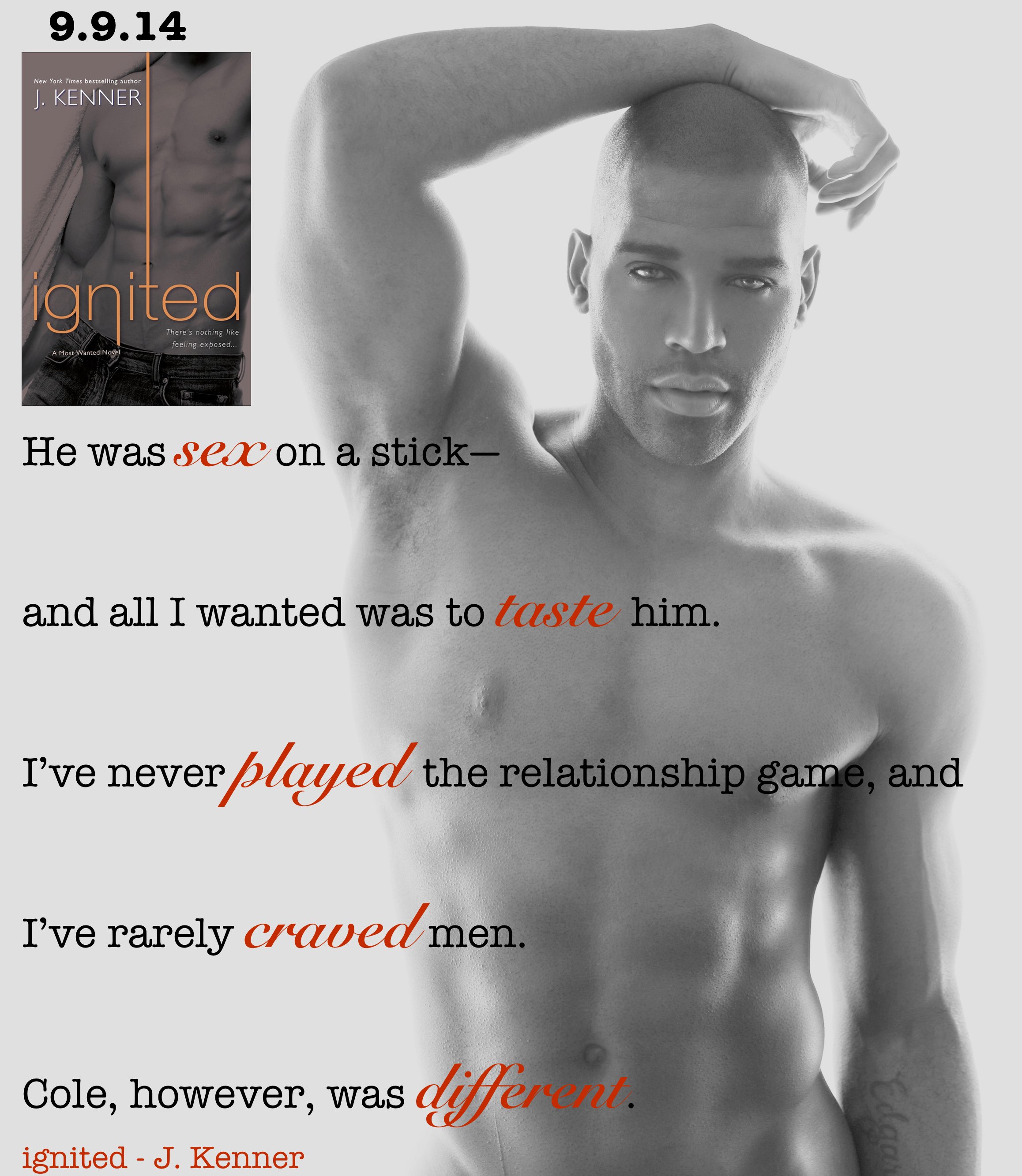 I stood in the middle of the newly opened Edge Gallery, my heels planted on the polished wood floor and the brilliant white walls of the main exhibit space coming close to blinding me.

Around me, politicians mingled with hipsters as they buzzed from one painting to the next like bees around a flower. Male waiters in sharply creased tuxes carried wine-topped trays with purpose, while their similarly attired female counterparts offered tasty morsels that were such works of art themselves it seemed a shame to eat them.

Tonight’s sparkling gala celebrated the opening of this newest addition to Chicago’s well-known River North gallery district, and everyone who was anyone was here. And not just because of the art. No, the crowd tonight had come as much to mingle with the owners as to celebrate the opening.

And why not? Tyler Sharp and Cole August were among Chicago’s elite. They, along with their friend and frequent business partner Evan Black, made up the knights—a triangle of power within the Chicago stratosphere. The fact that their power stemmed from both legitimate and illegitimate means only added to their dark, edgy coolness.

Not that the illegitimate side of the equation was public knowledge, but it did add a sort of mysterious sheen to these deliciously sexy men who made the press drool. I knew the truth because I was best friends with Evan’s fiancée, Angelina Raine, and that friendship had spread to include all the knights. At least, that’s what Angie and the knights believe. In reality, I’d realized the guys weren’t squeaky clean entrepreneurs within a day of meeting them.

For that matter, like attracts like. At least, that’s what I hoped. Because although I truly did want to celebrate the opening, I’d really come here for one purpose, and one purpose only: to finally and completely get Cole August’s attention—and then get him in my bed.

Not that I was progressing like lightning toward that goal. I’d come without a solid plan—something I never do—and after ninety minutes of mingling, I’d spoken only fourteen words to Cole, and that was at the door as I’d entered. I knew there were fourteen words, because I’d played the encounter—I wouldn’t go so far as to call it a conversation—over and over in my head. A form of mental torture, I guess, as I wallowed in my own insipidness.

“I’m so thrilled for you both.”

“Thanks, Kat. We’re glad you could make it.”

I shook my head at myself. Honestly, if my father had been around to overhear that exchange, he would have disowned me on the spot. Hadn’t he taught me the art of making small talk? Of pulling people in? Of getting close so that you can get what you want?

Planning and focus have always been second nature to me. I’d grown up in the grift, and I’d known the ins and outs of designing a long con even before I knew my multiplication tables.

Tonight wasn’t about a con, though. Tonight was about me.

And apparently that one little fact was enough to throw me entirely off my game.

I shifted slightly so that I could look at the object of my mission. I found him easily enough—Cole August is not the kind of man who blends. Right then he was working the room, discussing art with both serious buyers and casual friends.

Art was his passion, and it was easy to see how much tonight meant to him. The two featured artists—a South Side tagger whom Cole had found and pulled out of the ghetto and a world-renowned painter who specialized in hyperrealism—worked the crowd alongside him.

Cole moved with a raw power and casual arrogance that both suggested his own South Side upbringing and also defied it. I knew that he’d once been entrenched in a gang, but he’d pulled himself out of the muck to become one of the most powerful men in Chicago. As I watched him, it was easy to see the confidence and grace that got him there.

I stared, a little mesmerized, a little giddy, as Cole continued through the room. He was dressed simply in black jeans that showed off his perfect ass, and a white T-shirt that both accented the dark caramel skin of his mixed-race background, and subtly reminded the guests that Cole hadn’t been born to money and privilege. He wore his hair short, in an almost military style buzz cut, and the style drew attention to the slightly tilted eyes that missed nothing, not to mention the hard planes of his cheekbones and that wide, firm mouth that seemed molded to drive a woman crazy.

He was sex on a stick—and all I wanted was to taste him.

I’ve never played the relationship game, and I’ve rarely craved men. That bit of self-denial stemmed more from pragmatism than any lack of libido on my part. Why torment them and myself by revealing my sexual quirks, and then suffer the inevitable angst and hurt feelings when they’re unable to achieve what a sixty dollar cylinder of vibrating rubber could manage so easily?

And to be honest, most of the men who crossed my path were less stimulating—both intellectually and physically—than anything tucked away in my toy drawer.

Cole, however, was different.

Somehow, he’d snuck into my thoughts. He’d filled my senses. I’d felt that tug the first time I’d laid eyes on him, and that was years ago. But over the past few months, he’d become an obsession, and I knew that if I wanted to get clear of him, I had to push through.

I had to have him.

I’d come here tonight determined to get what I wanted—and now I was more than a little perturbed at myself for not having immediately leaped fully and confidently into the dark waters of seduction.

I knew why I hadn’t, of course. It was because I wasn’t certain that my advances would be welcome, and I wasn’t a big fan of disappointment.

Yes, I thought that he was attracted to me—I’d felt that zing when our hands brushed and the trill of electricity in the air when we stood close together.

At least once or twice when I’d caught his eyes the illusion of friendship had turned to ash—burned away by the heat I’d seen in him. But those moments lasted only a few brief and fluttering seconds. Just enough to whet my appetite, and to make me fervently hope that the heat I saw was real—and not simply the desperate reflection of my own raging desire.

Because what assurance did I have that it wasn’t all me? Maybe I was projecting attraction where none existed and, like a moth, I was going to get singed when I fluttered too close to the flame.