3 MORE DAYS and Cole will be all YOURS! 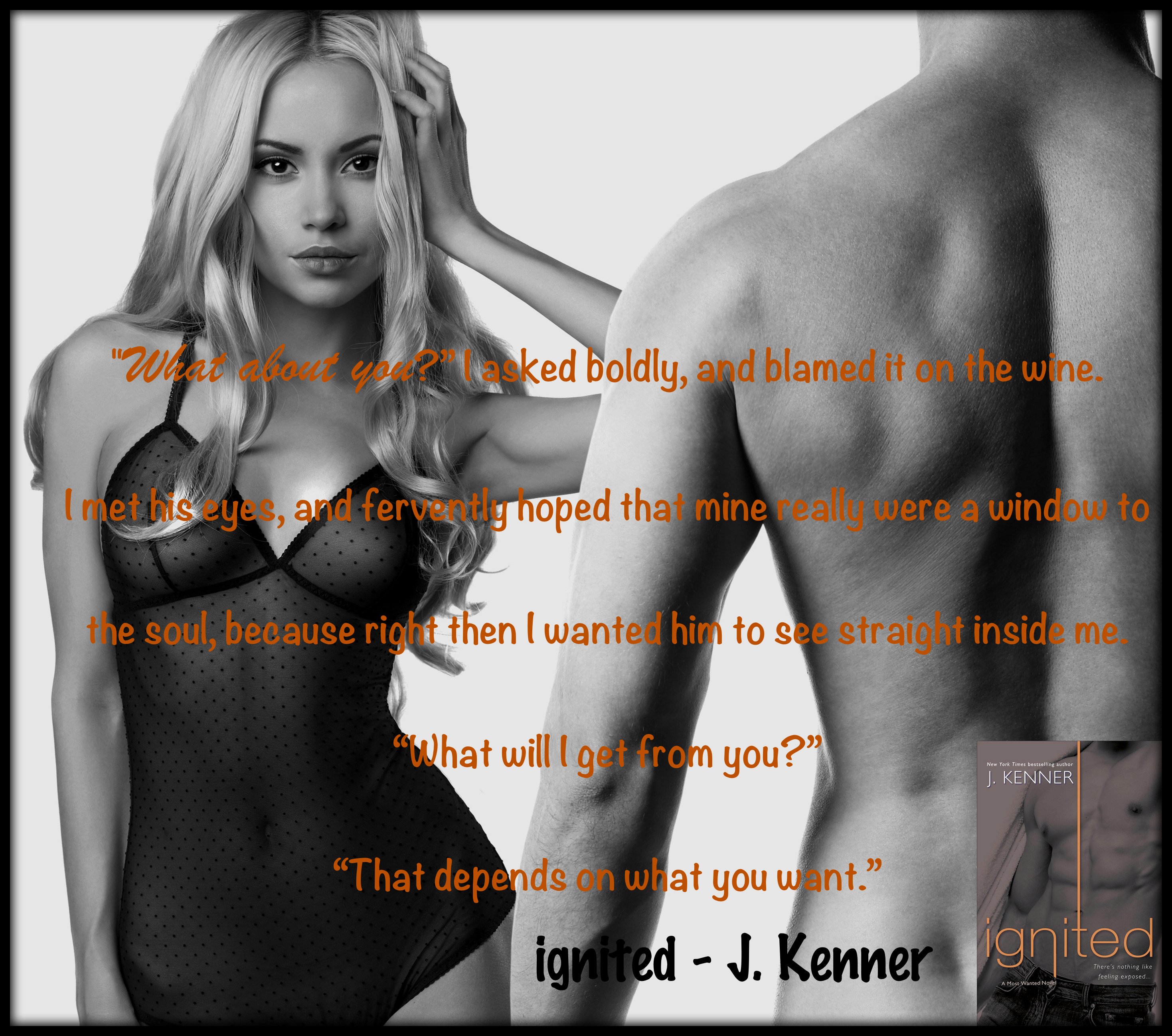 I drew in a breath for courage. Yeah, it was time to do this thing.

And so I took one step, and then another and another. Each taking me toward Cole August. Each fueling that fire inside me that raged for him—a fire that had the power to either raise me up or reduce me to ashes.

I could only hope that tonight I would capture the man, and not destroy myself in the trying.

It’s not sex that messes you up. It’s desire.

Once sex enters the equation, everyone has something to bargain with. It’s like a contract, and there’s consideration on each side. Maybe the sex isn’t great, or maybe it’s mind-blowing, or maybe the participants are so wrapped up in their own neuroses that it overshadows all the rest. But even then, the basic parameters are there and everyone knows what’s expected of them.

That’s not the case with desire.

With desire it’s all one-sided. You have nothing to go on except perception. A smile. A nod. A handshake that lingers too long. The stroke of a finger over hair.

You think you do, anyway.

I thought I knew how to read Cole. I thought I’d seen the subtle signals that validated my own desire. The little hints and movements, the casual glances and offhand touches.

I thought I’d seen them—but I couldn’t be certain. And if I wanted an answer I had to put myself on the line.

That is why desire is a bitch.

That bitch currently had her iron hand on my shoulder and was steering me through the crowd toward the object of my desire. He’d been pulled aside by an elegant seventy-something woman who appeared to be interrogating him and the artist about the subtle distinctions between two of the pieces on display.

I had three things going for me, and I clung tight to them like a child to a security blanket. First, my upbringing made me a chameleon, both changeable and adaptable. It also gave me a thick skin and the ability to fake confidence. Some kids thank their parents for forcing them to endure Little League in order to build character. I thanked my dad for teaching me how to pull off long and short cons.

Second, I’d seen desire in Cole’s eyes at least twice during the gala. Maybe I was projecting, but I didn’t think so. And if he wanted me, too, then that made my goal that much more attainable.

Finally, I’d slammed back two glasses of wine within the space of five minutes, and I am a lightweight where alcohol is concerned. That meant that I was floating on a cloud of liquid courage, just like I’d told the waiter. And as far as I was concerned, that was a damn fine thing.

“You can analyze,” Cole was saying as I approached, “or you can feel.” The two paintings he was discussing were huge, the canvases each eight feet tall and four feet wide. They stood side by side, the vibrant colors seeming to jump from the canvases. The artist, a South Sider who looked to be on the shy side of twenty and went by the name of Tiki, nodded vigorously from his post beside Cole.

“That’s what I been sayin’.” He thumped his chest with the heel of his hand. “You gotta go with what you feel here. You can pick it apart and hold up color swaths and call in your high price decorators, but that ain’t gonna tell you what’s gonna feel right when you walk into the room and see that canvas on your wall.”

The woman sniffed. “That may be so, young man, but my husband just paid six figures to our designer to redo the den, and I assure you that if what I purchase clashes with the decor, it won’t be your art I’m feeling.”

Tiki laughed. “You got me there, Amelia.”

I expected her to chastise him for his impertinence, but she only joined his laughter.

“What do you think, Kat?” Cole asked.

I looked up at him, surprised that he was pulling me into the discussion. More than that, I had the distinct feeling that he’d been watching me while I’d been watching Tiki and Amelia.

“I think that your six-figure decorating job isn’t worth a nickel if you don’t make the room yours.” I stepped closer to the canvases, sliding into operator mode. This I knew how to do. “If you had a completely empty room to work with, which would you choose?”

I looked from one to the other as Amelia considered. “It’s a hard choice, I know,” I said. “They’re similar, and yet at the same time each stands alone. They’re evocative,” I added. “The bursts of color. The subtlety of the muted areas.” I glanced at her, saw that she was nodding slightly, and started to reel her in.

“I don’t know about you,” I said—because we were just talking girl to girl now—“but I look at these, and they lift me up.” I did a quick inspection of her appearance. The classic lines of her dress. Her carefully styled hair. She was considering buying modern art, yes, but this was an elegant woman with roots that probably sank for generations.

That analysis told me where to go next. “It makes me feel like . . . ” I drifted off, as if considering. “It’s like being at the symphony,” I finally said. “When the music seems to lift you up and carry you away.”

“What I find particularly compelling is the way these two pieces blend together. You see? The colors complement each other. The red here draws out the purple on this one.” I indicated each painting in turn. “They work in tandem—honestly, I’d be afraid that separating them would be like removing all the violins from a performance of Beethoven’s Fifth.”

I glanced at Cole and saw that his eyes were narrowed just slightly. But whether he was impressed with my efforts or concerned that I was about to screw up a sale, I didn’t know.

Tiki was easier to read. His wide grin suggested that he knew exactly where I was heading.

I pushed them both out of my mind. Right then, I didn’t need performance anxiety adding to my already existing soup of emotional turmoil.

“How would you choose?” Amelia asked.

“Honestly?” I leaned toward her conspiratorially. “I’d cheat.”

Her eyes widened, as if I’d just said the most scandalous thing imaginable.

“If I had an empty room to fill, I wouldn’t leave with just one. I’d insist on acquiring both.”

She turned her attention from me back to the paintings. I could see the spark of interest, and then I saw the way her brow furrowed to form a deep V above her nose. “But all this is hypothetical. I don’t have carte blanche.”

“Actually,” I said, grinning broadly, “you do. What’s the color scheme of your room?”

“These colors,” I said, indicating a portion of the canvas on the left. I looked to Tiki for confirmation and help. He gave the confirmation, but he didn’t jump in as I’d hoped.

Cole, however, picked up the thread. “She’s right, you know,” he said to Amelia. “Alone, the other painting might not work with that scheme. But see here?” He gestured between the two paintings, his movements highlighting the colors and patterns. “These browns and greens are a perfect complement to the peach and pinks over here.”

“Yeah, man, they’re right,” Tiki said. “These canvases, they’re like a team. Like bread and butter, you know what I’m sayin’?”

I watched Amelia, and saw the slow spread of a smile. It was a smile I recognized from my days and nights in Florida, pushing paintings with my dad. It was a smile that said a woman with too much money had just figured out a way to justify her spending.

In other words, my work there was done.

I pressed my palm gently against her arm. “I’m sorry. I didn’t mean to run on like that. At any rate, I’ll let you and Tiki talk. I really should go mingle.”

“Well, I don’t think we need any further debate,” I heard her say as I melted into the crowd. “We just need that nice young girl with the credit card machine.”

“That was quite the performance,” Cole said a few moments later. He took my arm and steered me to one side. I went willingly, my entire body tingling simply from the firm grip of his fingers against my bare elbow.

“As far as I’m concerned, you get a standing ovation.”

“Really?” I asked, ridiculously pleased that I’d impressed him.

He let go, then moved to face me. I missed his touch, but the trade-off was worth it. I’m not the kind of girl who swoons over hunky firemen calendars and I’ve only seen Magic Mike once. But as far as eye candy went, Cole was a walking, talking Milky Way bar, and at least as tempting.

“Really,” he confirmed. An easy smile bloomed on his face, and he shook his head slowly, with obvious pleasure. “I didn’t realize that working as a barista required such honed salesmanship.”

“I’m a woman of many talents,” I said, then fluttered my lashes.

“Damn right you are.” He drew in a breath as he looked at me, and try as I might, I had no clue what he was thinking.

“That was quite the commission you just brought in,” he finally said. “I have a feeling you’ll be getting Christmas cards from Tiki for the rest of your life.”

“I look forward to it. What about you?” I asked boldly, and blamed it on the wine. I met his eyes, and fervently hoped that mine really were a window to the soul, because right then I wanted him to see straight inside me.

“What will I get from you?”

“That depends on what you want.”