Caress of Darkness: a Dark Pleasures novella by Julie Kenner

From the first moment I saw him, I knew that Rainer Engel was like no other man. Dangerously sexy and darkly mysterious, he both enticed me and terrified me. I wanted to run–to fight against the heat that was building between us–but there was nowhere to go. I needed his help as much as I needed his touch. And so help me, I knew that I would do anything he asked in order to have both. But even as our passion burned hot, the secrets in Raine’s past reached out to destroy us … and we would both have to make the greatest sacrifice to find a love that would last forever. 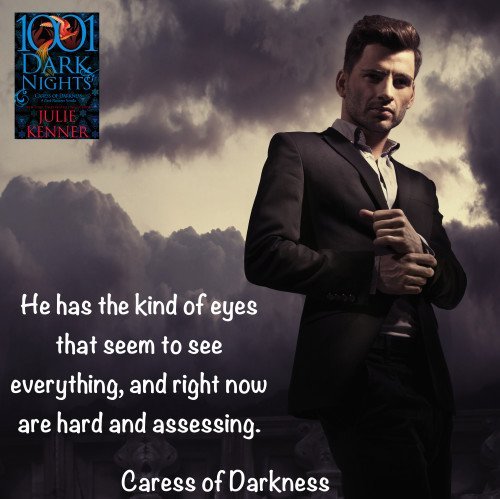 I jump, startled by the voice—deep and male and undeniably irritated—that echoes across the forest of boxes scattered throughout my father’s now-closed SoHo antique store.

“Who am I?” I repeat as I stand and search the shadows for the intruder.  “Who the hell are you?”

There is more bravado in my voice than I feel, especially when I finally see the man who has spoken.  He is standing in the shadows near the front door—a door that I am damn sure I locked after settling in for a long night of inventory and packing.

He is tall, well over six feet, with a lean, muscular build that is accentuated by the faded jeans that hug his thighs and the simple white T-shirt that reveals muscled arms sleeved with tattoos.  His face is like cut crystal, all sharp lines and angles that blend together into a masterpiece now dusted with the shadow of a late afternoon beard.

He has the kind of eyes that seem to see everything, and right now are hard and assessing. They are softened, however, by the kind of long, dark lashes that most women would kill for.

At the moment, his mouth is little more than a hard slash across his features, but I see a hint of softness, and when I find myself wondering how those lips would feel against my skin, I realize that I have been staring and yank myself firmly from my reverie.