Whoo-hoo! It’s day 3 of the countdown to  Anchor Me  (the fourth full-length book in the Stark series!) … and that means another snippet for you!

I hope you enjoy … and come back every day before release day (April 11) for more of the countdown! 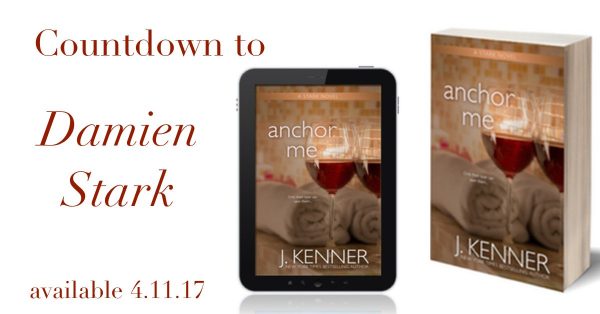 Note: If you’re coming at this page from Facebook, click HERE to jump immediately to where the snippet left off.

(If you missed yesterday’s post, you can find it here.)

Damien meets my eyes, and for just a moment his frustration is almost comical. Then he snatches up the phone and hits the button to call Charles. A second later, he’s saying, “Dammit, I told you I can’t be bothered with this right now.”

He listens to the response, the furrows in his brow growing deeper. Finally, he sighs, looking more frustrated than I’ve seen him in a long time.

Cold foreboding washes over me. Damien isn’t the kind of man who gets frustrated over business deals. On the contrary, the harder and more challenging the deal, the more he thrives.

Which means this is personal.

“I hear you, Charles, but I’m not paying you for your advice on this. I’m paying you for those resources you’re so keen on touting. So use them, dammit. Pull out all the stops and get me some answers by the time I’m back in LA. Fine,” he adds after another pause. “Call me if you have something definitive. Otherwise I’ll see you in a couple of days.”

He ends the call and slams the phone back down. I open my mouth, intending to ask him what’s happening, but before I get the chance, he pulls me roughly to him and closes his mouth over mine. The kiss is hard, brutal, and I slide closer, losing myself in the wildness. And for this moment at least, I forget my apprehension and his problems. There is nothing but us, our passion a raging blaze that clears away the debris of our lives, stripping us to the bone until there is nothing left but the two of us.

I’m breathing hard when we break apart, my lips bruised and tingling, my body burning. I want to turn around and go back to the hotel. I want to strip off my clothes and feel his hands on me, his cock inside me. I want it wild. Raw. Pain and pleasure so intense I get lost in them. Passion so violent it breaks me. And Damien—always Damien—right there to put me back together again.

I want, but I can’t have. Not yet. Because whatever else is going on, I’ve come to this neighborhood with a purpose, and if I back away now, I may not have the strength to return.

And so, as Damien holds me close, I press my cheek against his shoulder and sigh, letting the moment linger. Then I tilt my head up to see his face. Damien doesn’t keep secrets from me—not anymore—and I expect him to tell me what the phone call was about. But he says nothing, and my stomach twists miserably. Because I understand Damien well enough to know that the only reason he’d hold back is to protect me. And right now, he’s doing his damnedest to shield me from the emotional hell of this trip.

He twines his hand with mine, then kisses our joined fingers. “I’m sorry. This is our time. Your time. I wouldn’t have called back, except—”

“I get it. Really.” And I do. I understand why he returned the call. And I understand that this apology is his way of telling me that he’s not saying a word about it. Not now. Not until we’ve seen my mother.

For a moment, he holds my gaze, trying to measure whether I’m truly game-ready. Then he nods and glances down at the phone. “Are you sure you don’t want to call her first?”

“No. Let’s just go.” What I don’t say—but I’m sure Damien understands—is that there’s a certain amount of appeal in the element of surprise. For once, maybe I’ll have the upper hand. And the fact that Damien will be standing on her threshold with me is a bonus. I flash a small but very genuine grin. “I think you intimidate her,” I say.

“Mmm,” I say. “Okay, onward.” I gesture regally, indicating he should pull back onto the road. He’d stopped in front of one of the stately homes just a few blocks away from Highland Park Village—one of the ritzier shopping areas in the country, and a place with which I’m very familiar. I’m pretty sure my mother bought everything from designer diapers to ball gowns for both my sister Ashley and me in the center’s boutiques.

But despite the society page sheen of this Dallas enclave, a Phantom stands out. Especially this fully restored beauty.

“The neighbors are jealous,” I say, nodding toward two women openly gawking at the car as they jog. “They’re wondering who’s moving into the neighborhood with more money than they have.”

Damien brushes off the comment. “It’s not the price that intrigues them,” he says. “It’s the beauty. The craftsmanship. The restoration. This is a neighborhood that thrives on appearances,” he adds, nodding to his right and the line of elegant homes we are passing. Then he glances to his left, his eyes roaming slowly over me. “And this car—and the woman in it—are two things of pure beauty.”

My cheeks warm. “I’ll agree with you on the car,” I say modestly, though I can’t deny that the compliment pleases me. “But I think they’re mostly fascinated with the man behind the wheel—and the fact that he’s on the right side.”

Usually when we’re in a limo, Damien’s personal driver, Edward, acts as chauffeur. But Edward’s not with us on this trip, and even if he were, I know Damien would insist on driving his new toy.

It’s odd being a passenger on the driver’s side, but this 1967 Phantom V limo is as British as they come, having once been a formal royal family touring limousine.

No wonder I feel like a fairy tale princess.

We’d come to Dallas for my work, but when Damien had learned about the trip, he’d made an appointment to see a retired aerospace engineer he’d once met at a classic car show whose hobby-turned-second-career is restoring Bentleys and Rolls Royces to mint condition. We’d gone straight to his home in North Dallas after arriving, and Damien had spent two hours in a state of bliss talking about this Phantom.

“How much?” Damien had asked, after he’d inspected the limo thoroughly, commenting on the brilliant design and mechanical prowess with the kind of rapture that most people use when talking about movie stars. I couldn’t deny that he was right about the car’s beauty and uniqueness. It’s painted a typical black, but the sheen is such that every angle and curve is set off to perfect advantage. And the interior is as elegant as a palace, the wood carved and polished to perfection, the leather seats soft and supple. The car is rare, too. Apparently, only five hundred and sixteen of this particular model were made.

The engineer quoted a six-figure price, and Damien pulled out his checkbook without the slightest hesitation. Less than an hour later, we were driving down the North Dallas Tollway in the latest addition to Damien’s vehicular menagerie, and Damien’s giddy expression reminded me of a little boy on Christmas morning.

Now, he maneuvers the limo through Highland Park, the well-heeled neighborhood in which I grew up. Though my family’s net worth never came close to Damien’s, we were hardly scraping by. My grandfather had made a fortune in oil, and though much of that was lost in the recession—and later by my mother’s bad management—there’s no denying that I was a child of privilege, just like every other kid living in these massive, tony mansions.

I’d walked away from all that when I moved to Los Angeles, intent on escaping my past. I’d wanted a new life, a new Nikki. And I’d been determined to make it on my own without my mother’s baggage holding me down.

Now, I can’t help but smile as I look at Damien. At this car that cost more than most people earn in a year. It’s funny how things shift. I was wealthy in Dallas, but miserable. Now, I’m filthy rich in Los Angeles and happier than I could ever have imagined. Not because of the bank account, but because of the man.

“You’re smiling,” he says, sounding pleased, and I’m once again struck by the fact that he is as much on pins and needles as I am. Damien, however, isn’t worried about seeing my mother. Damien is worried about me.

“I was just thinking how happy I am,” I admit, and then tell him why.

“Because the money isn’t the heart of what we are to each other,” he says. “You’d love me even if I were destitute.”

“I would,” I admit, then flash an impish smile. “But I can’t deny that I like the perks.” I run my hand over the dashboard. “Of course, I’d like *this* particular perk better if Edward were here.”

“Not satisfied with just holding my hand, Mrs. Stark?”

“I’m fine with hand holding for now,” I say archly. “But later, I want more. Later, I want your hands on all of me.”

The glance he shoots me overflows with heat and promise. “I think that can be arranged.”

He does, and immediately my mood downshifts. Because now we’re on my actual street. Now, we’re a few blocks away from my childhood home.

Update: Follow this link to continue reading the next installment!

Want more? Be sure to pop back tomorrow for more of Anchor Me, available April 11. Grab your copy now!

And if you’re just now meeting Nikki & Damien, why not grab of copy of Release Me, the book that started it all!