My Fallen Saint Chap 1 ... and an EXCLUSIVE offer! - J. Kenner Skip to content

Home » Blog » Saint on Saturday » My Fallen Saint Chap 1 … and an EXCLUSIVE offer!

I’m counting down to the September 15 release of My Fallen Saint with weekly chapter reveals!

Hey everyone! I love these characters so much, and I just can’t wait until September for you to meet them! So I decided to do weekly chapters counting down to release week! I hope you enjoy!!  (Be sure to read all the way to the end for a SPECIAL OFFER for a FREE, EXCLUSIVE, bonus story!!) 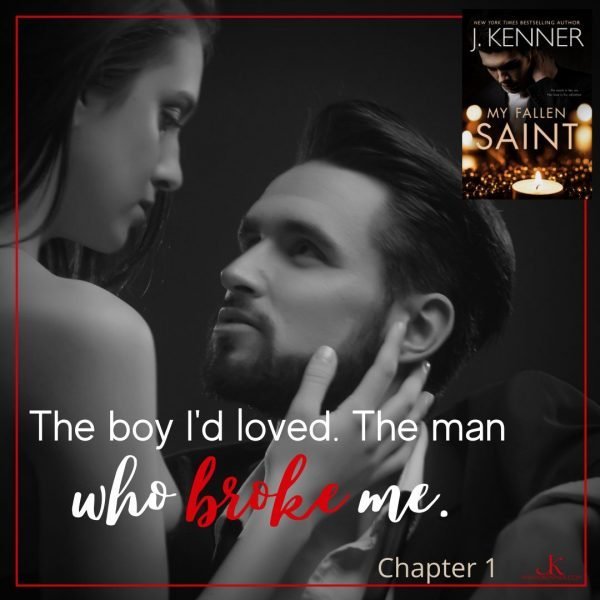 Here’s Chapter One (by far the shortest of them all)! Enjoy, and feel free to share!

The wind stings my face and the glare from the afternoon sun obscures my vision as I fly down the long stretch of Sunset Canyon Road at well over a hundred miles per hour.

My heart pounds and my palms are sweaty, but not because of my speed. On the contrary, this is what I need. The rush. The thrill. I crave it like a junkie, and it affects me like a toddler on a sugar high.

Honestly, it’s taking every ounce of my willpower not to put my 1965 Shelby Cobra through her paces and kick her powerful engine up even more.

I can’t, though. Not today. Not here.

Not when I’m back, and certainly not when my homecoming has roused a swarm of butterflies in my stomach. When every curve in this road brings back memories that have tears clogging my throat and my bowels rumbling with nerves.

I pound down the clutch, then slam my foot onto the brake, shifting into neutral as I simultaneously yank the wheel sharply to the left. The tires squeal in protest as I make a U-turn across the oncoming lane, the car’s ass fishtailing before skidding to a stop in the turnout. I’m breathing hard, and honestly, I think Shelby is, too. She’s more than a car to me; she’s a lifelong best friend, and I don’t usually fuck with her like this.

Well, now she’s dangerously close to the cliff’s edge, her entire passenger side resting parallel to a void that boasts a view of the distant coastline. Not to mention a seriously stunning glimpse of the small downtown below.

I ratchet up the emergency brake as my heartbeat pounds in my throat. And only when I’m certain we won’t go skidding down the side of the cliff do I kill Shelby’s engine, wipe my sweaty palms on my jeans, and let my body relax.

Well, hello to you, too, Laguna Cortez.

With a sigh, I take off my ball cap, allowing my dark curls to bounce free around my face and graze my shoulders.

“Get a grip, Ellie,” I murmur, then suck in a deep breath. Not so much for courage—I’m not afraid of this town—but for fortitude. Because Laguna Cortez beat me down before, and it’s going to take all of my strength to walk those streets again.

One more breath, and then I step out of the car. I walk to the edge of the turnout. There’s no barrier, and loose dirt and small stones clatter down the hill as I balance on the very edge.

Below me, jagged rocks protrude from the canyon walls. Further down, the harsh angles smooth to gentle slopes with homes of all shapes and sizes nestled among the rocks and scrubby plants. The tiled roofs follow the tightly winding road that leads down to the Arts District. Tucked neatly in the valley formed by a U of hills and canyons, the area opens onto the town’s largest beach and draws a steady stream of tourists and locals.

As far as the public is concerned, Laguna Cortez is one of the gems of the Pacific Coast. A laid-back town with just under sixty-thousand people and miles of sandy and rocky beaches.

Most people would give their right arm to live here.

It’s the place where I lost my heart and my virginity. Not to mention everybody close to me. My parents. My uncle.

The boy I’d loved. The man who broke me.

Not a single one of them is here anymore. My family, all dead. And Alex, long gone.

I ran, too, desperate to escape the weight of my losses and the sting of betrayal. I swore to myself that I’d never return.

As far as I was concerned, nothing would get me back.

But now it’s ten years later, and here am I again, drawn back down to hell by the ghosts of my past.

Be sure to come back next Saturday for Chapter 2!