Welcome to Chapter Two of My Fallen Saint as I countdown to the September 15 release day! 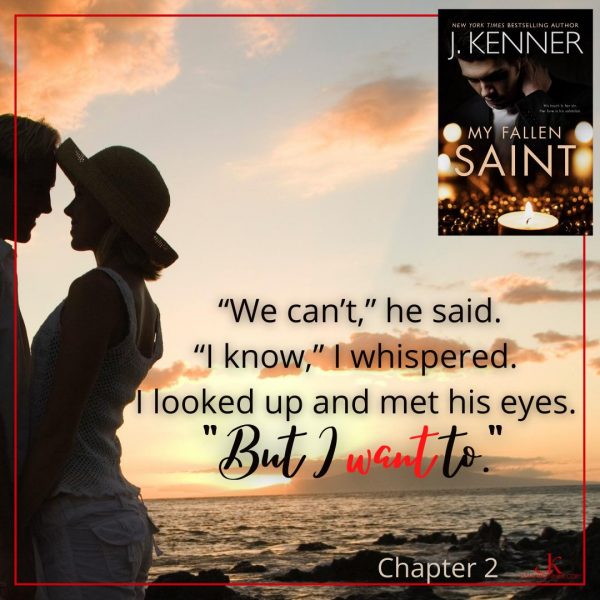 And now … on to Chapter Two!

I met Alex Leto on my sixteenth birthday, and the first time I saw him, something inside me turned on. Something like happiness, yet so much more complicated. Optimism, maybe, but mixed with rainbows and unicorns.

The day started gray and dismal, with storms rolling in at dawn. They parked themselves over my house, spread their dark gray arms, and stirred up wind and rain from daybreak all the way into the evening. Six of my ten invited guests called to cancel, but even before the party started, I’d known that it was ruined.

I should have seen it coming. Maybe not a gale, but something. After all, I was not the most blessed of kids. For starters, I was an orphan.

I’d turned four the day after my mother died, and though I used to tell my dad that I remembered her, by the time I was ten, that was a lie.

Her brother, my Uncle Peter, moved his commercial real estate business to Laguna Cortez after she died. My dad couldn’t afford to hire help, and as Chief of Police he had an erratic schedule. Daddy and I lived in the hills, but I’d go to Uncle Peter’s huge, light-filled beach house most days after school.

It was a stunning home, but I hated every moment away from my dad. Maybe some part of me knew what was coming. I don’t know. All I know is that I wanted him beside me and safe.

But wanting doesn’t matter. It never does. Wants are just so much fluff, and Fate is a goddamn bitch. The summer I turned thirteen, I learned that lesson well.

That’s when a gunman murdered my father, then killed himself. People tried to comfort me by pointing out that my father died on duty in the job he loved. But it didn’t help. He was still horribly, painfully dead.

After that, my life spiraled even more. I moved in with Uncle Peter, and all my friends thought that I was so lucky, because there aren’t that many beachfront homes in Laguna Cortez.

Eventually, I grew accustomed to my new normal. I’d find myself going entire days feeling happy, only to hate myself at night, because how could I experience joy when my parents had both died so horribly?

Which was why I wasn’t surprised when the storms rolled in on my birthday, because life will always sneak up and bite you.

Still, even with only a few kids showing up, we’d had fun. Instead of the beach, we settled into the media room to watch movies. And when Brandy and I went downstairs to ask Uncle Peter if my favorite pizza place was delivering in the storm, there he was.

A few years older than me, Alex was tall and lean, with close-cropped blond hair, a clean-shaven face that still had a boyish roundness, but an expression that was fully adult. His sandy brown eyes held me in place when he turned to look at me. And when his wide mouth curved into a friendly smile, a low, thrum teased between my thighs.

I’d had a crush or two by then, but I’d never reacted this viscerally to a guy. But Alex … well, a mere glimpse gave me more understanding of what all the fuss was about than any of the late-night gossip sessions at Brandy’s frequent slumber parties.

When he came over to shake my hand and wish me a happy birthday, I almost passed out. I was so flustered that I could only stand there, my hand in his, as I tried to play back the conversation of the last few seconds.

Alex Leto. That’s how he’d introduced himself. And he was working for Uncle Peter during his gap year while he decided on a college.

“Hi,” I’d squeaked, then kicked myself for being utterly uninteresting.

“Trouble with the movie?” Uncle Peter had asked, and I’d squinted at him, not understanding a word. “The projector,” he clarified. “Did you come down because I need to fix something?”

“Oh! Right. Pizza. We want to order pizza. Will they deliver in this weather?”

“If not, I can go get it for you,” Alex said, and if I hadn’t already fallen hard, that would have sealed the deal. A real live Prince Charming right in my kitchen.

Once Uncle Peter agreed, there’d been no more reason to hang out in the kitchen, and Brandy and I reluctantly went back to the media room. “Oh. My. God,” she whisper-squealed as we climbed the stairs. “Did you see the way he was looking at you?”

“He was being polite,” I countered, though her words revived that down low tingle, now complemented by a swarm of butterflies in my belly.

“Was he?” She winked at me, and I grabbed her wrist before she could burst into the media room.

“I just … I … please? Can we tell them about the pizza and leave it at that?”

She gave me a quick conspiratorial smile. “But he really is super cute.”

“I know, right?” And we both burst into giggles, only to fall into total hysterics when our friend Carrie pushed open the door with a scowl.

“Hello? Waiting the movie on you two. I mean, rude.”

We clapped our hands over our mouths to bite back another flood of laughter, took our seats, and settled in until the pizza came. And even though Alex was the one who delivered it—and even though he stayed to watch the second half of Aliens and sat right next to me—Brandy never said a word. Not then. Not ever.

Which is a big part of why she’s my best friend to this day.

After that, Alex was around a lot. Peter had a home office, but he did most of his work at construction sites or in the offices of the apartments and hotels he owned. He’d hired Alex to do administrative stuff, which meant that Alex was at the house most every day.

I turned down beach and movie offers from my friends, choosing to stay in and fetch Alex water and snacks and coffee. Each time I’d linger a bit, asking what he was doing, and he’d never blow me off. He’d even invite me to stay. Then one day he asked if I wanted to help.

“Not as interesting as spending the summer with your friends,” he’d said, “but I’d love the company.” He smiled then, and that tiny little motion—nothing more than muscles around lips—had melted me.

“Good. Because I’d rather be here.”

I nodded, my heart pounding with such ferocity I was sure he must be able to hear it.

“That works out great, because I like having you here.”

I met his eyes, and something deep inside me roared. For the first time in my life, I felt the hard punch of true, sexual desire.

“Right.” I swallowed, trying to overcome my desert-dry mouth.

So that’s what I did, helping him when I could, taking up space the rest of the time. And we talked. About anything and everything. I’d never been as comfortable with anyone in all my life, and that was despite the humming, buzzing, crackling in the air whenever we were near each other.

“Have you done anything?” Brandy asked when we were back in school months later.

“No! He works for my uncle, remember? Besides, he’s eighteen. Me, sixteen. And he knows it.”

She waved away my words. “Yeah, but so what? You act older. Ever since … well, my mom says you raised yourself.”

Honestly, Mrs. Bradshaw wasn’t wrong. My uncle may have sheltered and fed and clothed me these last few years, but that was about it. Nurturing, I got at Brandy’s house. And the rest? Well, I guess maybe I did raise myself.

“That’s perfect.” Her blue eyes twinkled. “Wrap yourself in a bow, and you can be his present.”

I didn’t give myself to him, of course, but when he turned nineteen, I gave him a leather friendship bracelet with a Celtic knot. “That’s called a love knot,” he said, and I felt my cheeks burn hot.

“Didn’t you? Well, it makes it all the more special to me.”

I did, lightly stroking my thumb over his wrist as I manipulated the clasp.

“This is fucked up,” he said, so soft I could barely hear him.

“I’m sorry. I should—” I turned to go, but he grabbed my arm and pulled me back. We were alone in Uncle Peter’s study, and he held me in place.

“You’re sixteen.” He practically growled the words. “Why the hell are you only sixteen?”

I shook my head, blinking as I tried to prevent the flood of tears.

“I know,” I whispered. I’d been talking to the ground, but I told myself that wasn’t fair. He deserved the words. He deserved to see my heart. I looked up and met his eyes. “But I want to.”

Preorder here … don’t worry! You’re not charged until the book comes out!

Be sure to come back next Saturday for Chapter 3!