Welcome to Chapter Seven of My Fallen Saint as I countdown to the September 15 release day! 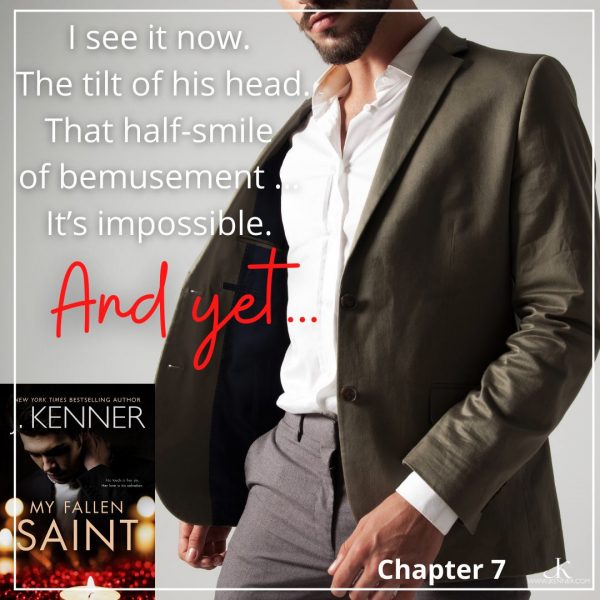 “He bolted. The son of a bitch bolted.”

“Seriously?” Brandy leans sideways, as if maybe I just missed him. “What the hell? So maybe he really was blowing you off this afternoon.”

I make a face, then stifle the urge to order another drink. “What now? Should I try to find him? He’s probably outside right now. We could—”

Brandy tilts her head to the side. “Um, no. Neither one of us wants to sprint around the Arts District trying to find a man who probably hopped in a car the second he stepped out the door.”

“Let’s forget the asshole and go back to my house. I liked the pizza plan a lot.”

So did I, but that was before. Now I’m antsy. Frustrated. And very pissed off.

I shift on the stool so that I have a better view of the interior of the bar. And the truth is, there are a lot of hot guys in here.

Brandy puts a hand on my arm. “Ellie.”

I tense. That’s the blessing and the curse of a lifelong bestie. “Don’t handle me, Bran. I’m not you. I don’t need the roses and flowers and wining and dining.” I just want the rush. I just want to forget.

I look at her. “Seriously?” Easy acceptance of my less than prudent quirks has never been high on Brandy’s list.

“Sure. It’s great that you’re not me. The world couldn’t handle that much awesome.”

I roll my eyes, careful not to smile.

“It’s just that I worry about you.”

Her voice is so soft—so genuine—that I can’t help but sag under the weight of it. “I know.”

The truth is, I worry about me, too. Fast cars. Fast fucks. I’m a therapist’s wet dream, or I would be if I ever saw one. So far, I’ve kept far enough ahead of my demons that I haven’t felt the need to lie on that iconic couch. Maybe someday, but not yet.

And thanks to my bestie, I won’t hit it tonight, either. I curve my lips into a smile as I let my body sag in defeat. “Just not a rom com, okay? I really couldn’t stand the cuteness.”

I think about it. The movie’s over twenty years old, but it’s one of my favorites. “Two hot girls getting the better of an asshole guy? Yeah. Sounds perfect for tonight.”

And it is, actually.

Once we’re back at Brandy’s place, we make popcorn, then settle on the couch on either side of Jake. We sip wine and snack on the popcorn and by the time the movie ends, I’m feeling less edgy and seriously pumped up on girl power.

I’m also feeling at loose ends. And a little buzzed. “I’m going to walk down the hill for a coffee.”

Brandy’s house is the kind of place that real estate agents would love to get their hands on because the commission would be so sweet. It’s tucked up in the canyons, but still a short walk from the Arts District and the beach.

It’s a two-story, three-bedroom stone and wood house that belongs to some guy who travels about forty-five weeks out of every year, and who Brandy calls Mr. Big Shot. In exchange for very cheap rent, Brandy keeps the house in order, sorts and forwards his mail, takes care of the house-related bills and maintenance, and generally runs the place. My job pays more, and I live in a sixth-floor studio walk-up with dicey plumbing in a neighborhood that is on the scary side of iffy.

Jake whines as Brandy shifts so that she can gape at me. “Coffee now?”

“It’s not even nine yet. And I want something other than instant.” Brandy has somehow managed to get through life without owning an actual coffee maker. How we’re such good friends is beyond me.

“I’m so glad that’s your vice, not mine.” She waves a hand imperiously. “Go ye forth into the world and seek thee the blessing of the great god of caffeine.”

“You have drunk way too much wine.”

Can’t argue with that. “Don’t wait up. I’m probably going to take a walk on the beach.”

Her brow furrows. “Do you want company?”

“No, it’s fine. Thanks for the offer, though. I just—you’re the good part of being back. I’m still dealing with the rest of it.”

I change out of my comfy PJs into jeans, then head out. It’s a gorgeous night, with crisp air and a moon that provides more than enough illumination for the short walk down the hill to Brewski.

I take my coffee to go, then aim myself toward the tidal pools and the exact spot where Alex kissed me for the very first time.

It’s a bit of a hike, but I don’t mind, and I take off my shoes and dangle them as I walk the length of shoreline between the Arts District and the DSF.

As soon as I reach the tidal pools, I drop my shoes. The tide is out, so there’s only a few inches of water in the pools and the craggy rocks are mostly dry.

I sit on the edge of one and sip the last of my coffee as I look out at the waves, the froth shining silver in the moonlight as I lose myself in memories. The way his fingers slid through my hair as he cupped the back of my head. The flutter in my chest that told me that I was alive.

And though we hadn’t done more than kiss, a bond had been forged between us that night, and to this day I don’t understand how it had been broken.

Without consciously intending to do it, I reach into the back pocket of my jeans and pull out the slim card wallet that holds my driver’s license, a credit card, an emergency fifty, and the tattered slip of paper that’s lived in there for years.

The paper’s still white, and the ink is still readable, but the tape that holds the two ripped halves together has browned with age.

I don’t have to read it. I know exactly what it says. I’m sorry. Remember that you’re strong.

That’s it. Just two simple words and a bullshit platitude. Not even a signature.

And I never saw Alex again.

My uncle was dead. The man I loved was gone. And I didn’t understand any of it.

I was confused. Lost. I wanted answers.

As the days passed, confusion turned to anger and then hate. Or I wanted to hate him. I’m not sure I ever truly managed. Mostly, I just felt numb.

Considering Peter’s execution-style murder, Alex had probably gotten scared and bolted. At least, that’s what Chief Randall told me after Ricky Mercado turned himself in.

So, yeah. I knew why Alex left. But I still don’t understand why he never came back. Or why he slunk out while I was sleeping. Or why he left me with nothing but two useless sentences even though he had to know that he was breaking my heart.

Part of me wants to believe that he’d simply used me. That he’d been a teenage psychopath who’d fixated on me the day we met, and then he wove a vile plan to pop the cherry of the naive little girl who’d fallen so desperately in love with him.

It would probably be easier if I could believe that. But I don’t. What had burned between us was real and magical. He’d betrayed us both by leaving, and I don’t understand why.

More than that, I’ll never understand why. Because the only one who knows is gone.

During my time in uniform, I tried to track him down. I wanted to find him. To stand in front of him and force him to tell me why. Why he’d left. Why he’d hurt me. But I hadn’t been able to find him. Not even a trace of him.

Maybe if I’d thought to play detective in the days immediately after he left, I would have discovered more. But I’d been broken then, lost in a deep pit of grief. And when I’d finally pulled myself out of the hole, all the strings leading back to Alex had been cut.

Maybe that was for the best. It’s not like I could ever forgive him.

But I wanted—needed—closure. I guess I still do.

And the knowledge that I may never have it eats at my soul.

With a sigh, I take the last sip of my now-cold coffee and stand up, ready to make the trek back to Brandy’s house. I keep my head down as I turn my back to the ocean, watching my footing so that I don’t trip and fall on the sharp rocks.

As soon as I’m safe in the sand, I lift my head, scanning for my shoes. But all thoughts of shoes and Brandy leave my head in a whoosh when I see him. The man standing in the dark at the edge of the sand, his face tilted down so that I see only dappled shadows and the glow of moonlight on his glasses.

In the instant before I recognized him, icy fear had flooded my body, and I use that lingering adrenaline to lash out. “You son of a bitch! You cancel my interview, and then you follow me?” I stalk toward him. “What? It wasn’t good enough to look down on me from your goddamn concrete castle? Or sneak peeks of me at a bar? You have to—”

He takes off his glasses, lifting his head at the same time, and my words catch in my throat.

That half-smile of bemusement curving up on those wide, sensual lips.

And those sandy, deep-set eyes, so full of pain and regret and not even a hint of green.

It’s impossible. Completely unbelievable. And yet…

Be sure to PREORDER NOW! Release day is on 9/15, so there’s not much time left to claim your bonus story!