So, raise your hand if you’ve read Release Me…..

… Okay, that’s a lot of you! Now tell me. Do you remember the part where Damien tells Nikki that basically pain and pleasure work together?

Because that’s a lot like a release day for authors. No, really!

Now imagine Damien Stark. (I’ll wait a bit so you can enjoy the moment ….). Remember that scene we’re talking about? It’s their first time together, and he’s about to bind her wrists, and she asks if it’s going to hurt…

A deliciously sexy scene, right? Full of anticipation and possibilities edged with fear.

Now let’s imagine Damien saying those lines … but this time he’s not talking about sex:

“Do you know what a book release day is?”

“Most people think it only means that your book is tossed out into the world. But that’s not all. The word derives from the Latin. It means suffering. Submission. Pain and pleasure, Nikki. A book release.”

The flash of heat that burns across his expression is unmistakable.

“Yes,” I say without hesitating.

“Then trust me to help you make this the best release ever.”

Release Me … only changed up 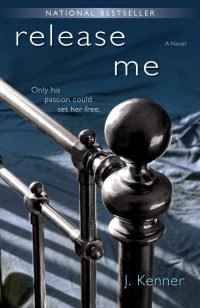 For fans of Fifty Shades of Grey and Bared to You comes an emotionally charged romance between a powerful man who’s never heard “no” and a fiery woman who says “yes” on her own terms.

(So who caught that double entendre at the end?… Release. …Release … Get it?)

For me, I’m trying much harder to be present in the moment on release days because I really, truly, 100% So.Much. Love interacting with readers and hearing what excites them about the book and the characters. I mean, I lived with those people on the page for a long time; they’re part of me. Heck, they’re family.

But at the same time … introvert. (There is a reason that in my lawyering years I never wanted to be a trial lawyer. Appellate? Hell, yes. You’re prepared ahead of time. It isn’t off the cuff–or at least not as much. … But being right there in court with all eyes on you as you? That would be almost like being an actress … :::shudder::: In my fantasies, I might be able to sing Broadway show tunes that bring down the house. In reality? Never in a million years…..

(I also don’t like surprise parties and I’m not a huge fan of birthday parties. Why? Because I’m in the spotlight.)

Yeah, so, release days are a lot like that. But not only am I in the spotlight–and with social media, there are a LOT of spotlights shining!–but people are talking about something I created. And I want to engage, to chat. And at the same time, I want to hide. So the whole thing is an eep kinda feeling for me.

Like a lot of writers, my happy place is observational. That’s not universal, of course, but it’s fair to say it’s pretty common.

And yet … and yet … I still WANT to be out there. Commenting. Sharing. Riffing over the characters. Joying in the fact that this new book has come into the world.

I want to be this guy:

And I’m not the only one! I chatted with a number of author friends, and I think it’s fair to say that, based on my entirely non-scientific poll, Release Days are both stressful and wonderful.

USA Today bestselling author Darcy Burke sums it up nicely: “Release days are a strange mix of “Wow, did I really do that?” and “Yes, this is off my plate and out in the world!” They are also a good excuse for a cocktail or glass of wine. 😉”

(Me: Yes, please! Pass the wine and chocolate!)

Author Jenn Stark says, “I’d say I go through the five stages of author launch day: Denial that I can’t actually do everything I planned to do to promote the book…anger that a brilliant idea I had the night before never had a chance to make it into the book…bargaining that If I could just hit this list or get this number of positive reviews I will find a way to lead a more balanced life…depression over any first day review that dips below a four star or says something unreasonably harsh, making me wonder why I do all this… And finally, acceptance that I do it because, well, stories. 😉. “

New York Times bestselling author Carrie Ann Ryan adds, “You would think after 100 release days things would become rote or even dare I say, easy. That’s totally not the case! While I love the fact that I finally get to share my words and characters with my readers, I’m far too stressed to actually enjoy it until the next day! LOL”

New York Times and USA Today bestselling author, Toni Anderson, author of the Cold Justice novels, says that after a release day she feels “Like I have run a marathon.”

And New York Times bestselling author Rebecca Zanetti says, “Release days are stressful for me.  I love that the book is available to fans, but I’m a basketcase all day.  I usually fall down the stairs, spill coffee, or tumble into the pond on release day, so I’ve learned to stick close to my office and keep bandaids near.  :)”

(Me: Right there with ya! … and worried a bit about that stair falling thing…)

CLEARLY, WE HAVE A CONSENSUS!

So there you go Release days are heady and exhausting. They are amazing and stressful. They are pain and pleasure. The best kind.

I think Damien Stark would approve.

(P.S.! Carrie Ann, Rebecca, and I will be talking about our new releases on Friday, June 11! Join us on Zoom! Just click the image, or follow this link at 7pm CST on Friday!